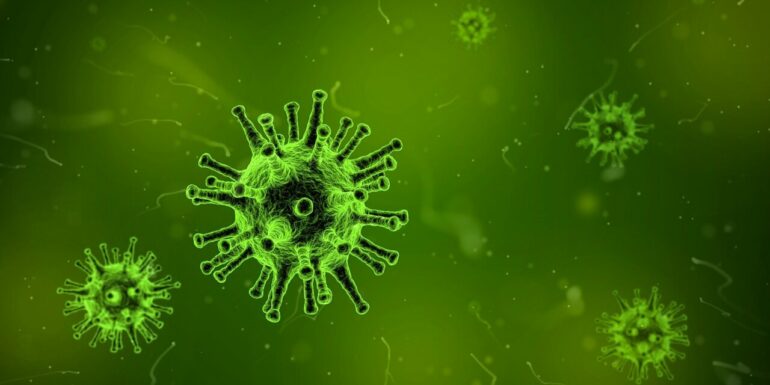 The human immune system is a complex network of organs, cells and proteins that defend the body against infections and diseases. While our bodies work constantly to ensure invading infections don’t breach the defenses, viruses are working just as hard to coerce our immune systems into allowing access and staying quiescent.

A team of researchers from Florida State University’s Department of Biological Science and Institute of Molecular Biophysics has uncovered a mechanism one cancer-causing virus uses to evade immune-system responses that would normally trigger antiviral responses and virus suppression.

The group’s work, published this month in the Proceedings of the National Academy of Sciences, reveals key details that will help deepen our understanding of how viruses effectively evade immune responses, which also drive tumor development and growth.

“The human immune system is normally very effective in the recognition of viral infection and the subsequent launching of antiviral defenses,” said Assistant Professor of Biological Science Qian Yin. “Viral RNA and DNA can be detected by the host immune sensors to trigger potent antiviral immune responses. Therefore, in order for viruses to establish infection and persist in the host, viruses have evolved elaborate mechanisms to evade these host immune responses. Our work is particularly interested in how this evasion is achieved.”

The enzyme cyclic GMP-AMP synthase, or cGAS, is one of the most critical host immune sensors. It detects viral DNA and binds to double-stranded DNA to initiate anti-viral and pro-inflammatory responses that stop the invader in its tracks or reduce its efficacy. Because cGAS acts as a gatekeeper for the body’s immune system, it is the main target of many viral infections, including Kaposi’s sarcoma-associated herpesvirus, or KSHV, one of seven known viruses that collectively cause about 15 percent of human cancers.

KSHV causes several types of cancer, most often in immunocompromised individuals: Kaposi’s sarcoma affects the lining of blood and lymph vessels; primary effusion lymphoma causes fluid buildup in the tissues lining the chest and abdominal cavities; and a subset of multicentric Castleman disease, a rare disorder that causes overgrowth of cells inside the body’s lymph nodes.

In 2015, Professor of Biological Science Fanxiu Zhu, who specializes in KSHV research, and his lab discovered a KSHV protein as the first viral inhibitor of cGAS. They named this protein KicGAS.

“While previous research showed that this KSHV protein inhibits cGAS enzymatic activity, how it does its job remained unclear,” said Zhu, one of this study’s co-authors. “Our current work solved the crystal structure of this protein. The simple repeating units of the viral protein form a long polymeric chain, explaining how it binds to DNA more efficiently and providing insight into its competitive inhibition of cGAS activity. The unexpected polymeric nature of this viral protein separates it from other known viral relatives, which also hints at co-evolution between the viruses and their hosts.”

The enzyme cGAS and its transmitted signals are crucial not only for antiviral immunity but also for immunity to tumors.

“Discovering the underlying mechanisms by which KSHV inhibits cGAS is essential to understanding how viruses cause human cancers and how evasion of the host immune responses contributes to the development of tumors,” said postdoctoral scholar Debipreeta Bhowmik, another study co-author. “Cancer cells usually actively replicate their DNA with a less rigid quality control system, and abnormal DNAs from cancer cells are now known to be sensed by cGAS in immune cells to trigger anti-tumor immunity to destroy cancer cells.”

It is conceivable that if cGAS is activated and not evaded by the viruses, KSHV cannot infect the host effectively due to cGAS-mediated antiviral immunity, which prevents the Kaposi sarcoma tumor from developing, Bhowmik explained.