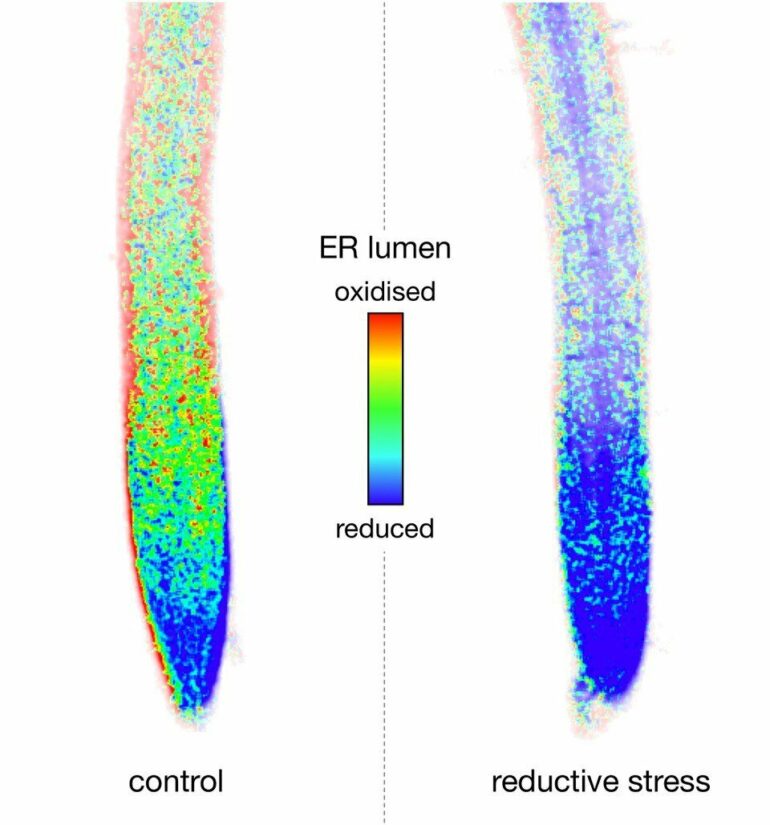 According to a team of plant researchers, mitochondria provide unexpected help for cells in a crisis by respiring away harmful substances. The current study produced by the Institute of Biology and Biotechnology of Plants (IBBP) at the University of Münster and the Institute of Crop Science and Resource Conservation (INRES) at the University of Bonn has been published in the journal Plant Cell.

“The main job that mitochondria have,” explains study leader Prof. Markus Schwarzländer from the IBBP at the University of Münster, “is to act as hubs of metabolism. What is surprising now is that evidently they are also able to take care of an excess of reduced sulfur compounds, so-called thiols, which could otherwise lead to damage at other places in the cell.” To support this, a special crisis program is triggered, the ANAC017 signaling pathway. “The ‘alternative oxidase’ protein then ensures there is a higher respiratory capacity in the mitochondria in plants,” says Schwarzländer. This process was jointly discovered some years ago by two teams of researchers from Australia and Belgium. What is new now, is the discovery that it can be triggered through reductive stress and can serve to protect protein folding in the endoplasmic reticulum (ER), i.e. the export system for proteins in the cell.

“The endoplasmic reticulum is a compartment where proteins are folded with the support of a specific oxidation system and prepared for export from the cell or for storage,” says Prof. Dr. Andreas Meyer of the Institute of Crop Sciences and Resource Conservation (INRES), who is also a member of the Transdisciplinary Research Area “Sustainable Futures” at the University of Bonn. “Reductive stress leads to a disruption of oxidative protein folding due to an excess of low molecular weight thiols.”

Something that is also new—and unexpected—is that the mitochondria manage to respire away thiols at a high rate. “This contradicts current thinking,” Schwarzländer concedes, “which is why we used several different methods in order to be able to validate our observations independently and rule out any possible errors.” To this end, the team developed a new method for dynamically investigating the energisation of mitochondria.

“That cell respiration in the mitochondria can oxidize substances—and, linked to the conversion of energy, constantly does so—is one of the outstanding discoveries in the biosciences in the past century,” Schwarzländer emphasizes. The fact that mitochondria in plants are particularly flexible and have special mechanisms for supporting processes in other cell organelles, is something that has been known for many years now, he says. “But this latest study decisively extends our understanding of this flexibility.”

He adds that the idea of a collaboration between ER and mitochondria during reductive stress came to light just recently through work being done on yeast and animal cells. “What was particularly surprising was the observation that thiols can indeed be respired away at a high rate by mitochondria in plants—either directly or via a kind of ‘metabolic bypass’ which now needs to be examined.” As a result, the mitochondria in the cell acquire a new, unexpected function as the ‘patron saints’ of protein folding in the ER. According to the researchers, it is regulated by the cell, depending on the cell’s requirements.

All life consists of cells. All cells need proteins, which have to be folded very precisely to be able to fulfill their function. Proteins which are secreted from animals, fungi and plants—or which contribute to environmental interaction on their surface—have to be stabilized by means of so-called disulfide bridges. One example of this in humans is insulin. In general, though, countless vital receptor and signaling proteins only function with the correct links via disulfide bridges. These are established at a very precise place in the cell, the so-called endoplasmic reticulum (ER). For this purpose, sulfur atoms from each of two thiol groups of the amino-acid cysteine in the interior of the ER are oxidized and linked covalently.

If, however, more disulfide bridges are suddenly needed, or if they are broken up by a stress factor or by certain chemical substances, this is problematic for the cell. Wrongly folded proteins can cause extensive damage, even death. It is for this reason that the cell reacts with special crisis programs. These well-examined programs support protein-folding in the interior of the ER—for example, by providing additional capacity in the oxidization machinery. The novel finding in this study is the discovery that, when a crisis arises, the ER receives support from another area of the cell.