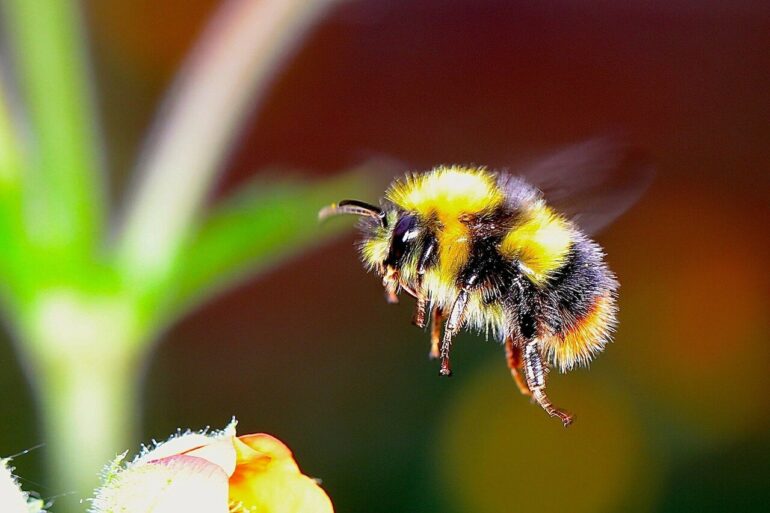 New research by a team at Queen Mary University of London shows that bumblebees can modify their response to ‘noxious’ (painful) stimuli in a manner that is viewed in other animals as consistent with the ability to feel pain.

The researchers showed that bumblebees are capable of modifying their response to ‘noxious’ (painful) stimuli in order to get a higher sugar reward. The possibility of insect pain and suffering should therefore be taken seriously, they say.

Queen Mary’s Professor Lars Chittka, author of the new book The Mind of a Bee, who led the research, says that “insects used to be regarded as simple reflex automatons, responding to damaging stimuli only by withdrawal reflexes. Our new work shows that bees’ responses are more flexible and that they can suppress such reflexes when it suits them, for example if there is an extra-sweet treat to be had. Such flexibility is consistent with the capacity of a subjective experience of pain.”

Study first-author Matilda Gibbons, Ph.D. student at Queen Mary University of London says that “scientists traditionally viewed insects as unfeeling robots, which avoid injury with simple reflexes. We’ve discovered bumblebees respond to harm non-reflexively, in ways that suggest they feel pain. If insects can feel pain, humans have an ethical obligation not to cause them unnecessary suffering. But the UK’s animal welfare laws don’t protect insects—our study shows that perhaps they should.”

In the paper, published today in Proceedings of the National Academy of Sciences (PNAS), the researchers used a ‘motivational trade-off paradigm’, where animals must flexibly trade-off two competing motivations. Bees were given the choice between either unheated or noxiously-heated (55°C) feeders with different sucrose concentrations and marked by different colors.

When both feeders were high-quality and one of them was noxiously heated, bees tended to avoid the heated feeder. But the bees were more likely to use the heated feeders when they contained a higher concentration sucrose.

The team also expanded on the motivational trade-off paradigm by ensuring that the trade-off relied on cues (colors) that the bees had learned to associate with a higher sugar reward. Because the bees used learnt color cues for their decisions, the trade-off was based on processing in the brain, rather than just peripheral processing. In other words, the bees decided to undergo some pain or discomfort in order to get a higher sugar reward.

This showed that the trade-off is mediated in the central nervous system—an ability that is viewed in other animals as consistent with the capacity to feel pain. The researchers say that because of the subjective nature of pain experience, this not a formal proof, but the possibility of insect pain and suffering should be taken seriously.

Professor Chittka says that “insects (unlike vertebrates) are not currently protected by any legislation regarding their treatment in research laboratories and in the growing industry that produces insects for human consumption or as food for conventional livestock. The legal framework for the ethical treatment of animals may have to be expanded.”

“The increasing evidence for some form of sentience in insects places on us an obligation to conserve the environments that have shaped their unique and seemingly alien minds. We humans are only one of many species capable of enjoyment and suffering, including pain-like states. Even miniature creatures such as insects deserve our respect and ethical treatment and a duty to minimize suffering where it is in our power to do so.”