Cavefish modulate lipid metabolism to adapt to life in caves 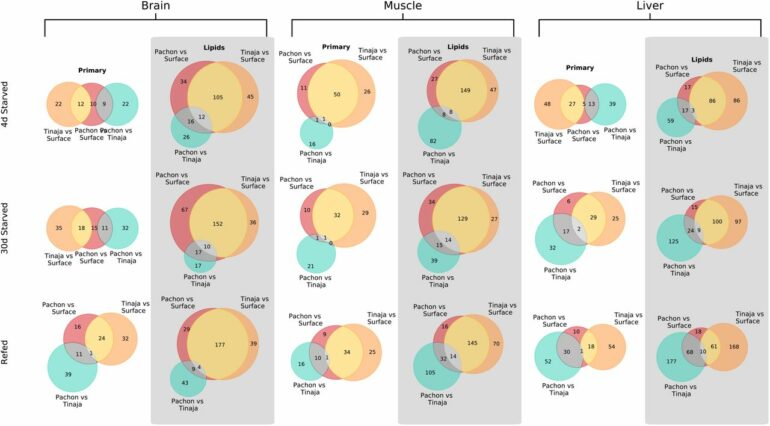 The Sinocyclocheilus represents a rare freshwater teleost genus endemic to China. With widespread drying associated with the aridification of China during the late Miocene and Pliocene, Sinocyclocheilus began to seek refuge in deeper waters and colonized cave habitats, leading to the evolution of cave-dwelling forms. Cave dwellers evolve a series of troglodyte characteristics and behavioral adaptations to enhance survival in caves, an extreme environment of perpetual darkness with infrequent food supply.

In a recent study published in Molecular Biology and Evolution, researchers led by Prof. Shui Guanghou from the Institute of Genetics and Developmental Biology and Dr. Meng Fanwei from the Institute of Zoology of the Chinese Academy of Sciences presented new findings pertaining to the differential regulation of lipid metabolism in the surface-dwelling and cave-dwelling forms of Sinocyclocheilus.

The researchers used a combination of quantitative lipidomics and spatial mass spectrometry imaging and systematically constructed a brain lipid atlas of the two forms of Sinocylocheilus. They observed a preferential accumulation of DHA-lipids in the brain of surface fish, while that of cavefish displayed a marked increase in ARA-lipids.

The preferential accumulation of specific polyunsaturated fatty acids extends to the liver and eye of the two fish forms, which the researchers attributed to the important role of DHA membrane lipids in mediating complex motor and visual functions critical to the survival of surface fish in an open environment.

They also found a selective demyelination of hindbrain raphe serotonergic neurons and the development of fatty livers in cavefish, which represent important metabolic adjustments that serve to eliminate complex social behavior and increase energy storage, respectively, allowing cavefish to thrive in their extreme habitats.

The surface-dwelling and cave-dwelling forms of Sinocylocheilus thus provided a natural paradigm in understanding how neurological and systemic adaptations in lipid metabolism form the basis of recessive evolution.