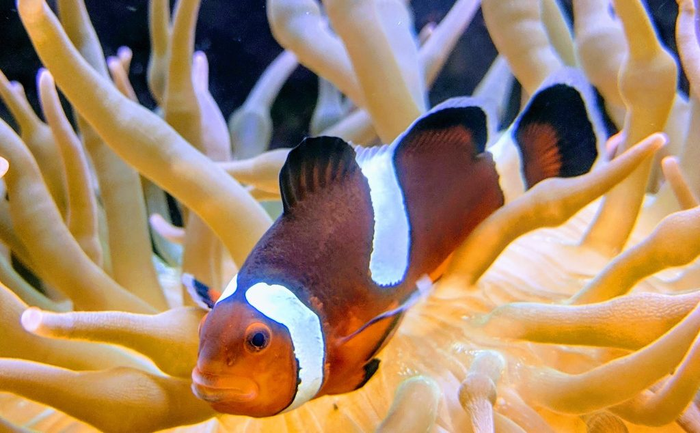 Ocean pollution is unfortunately becoming more commonplace, raising concerns over the effect of chemicals that are leaching into the water. In a new study, researchers have discovered how these chemicals can affect the reproduction in common anemonefish Amphiprion ocellaris.

Endocrine disrupting chemicals—which interfere with how the body’s hormones work—can obstruct normal reproduction in animals. Bisphenol A and 17a-Ethinylestradiol (EE2) are two common chemicals of this nature. BPA is an endocrine disruptor and is found in a lot of different plastics like water bottles and EE2, commonly found in birth control pills, enters into the ocean from human waste and wastewaters of manufacturing plants and hospitals.

“In Indonesia, for example, there are beautiful coral reefs found below a lot of garbage, so anything that enters the water is affecting the fish,” said Jose Gonzalez, a former undergraduate researcher in the Rhodes group.

“There have been previous studies that have established that these pollutants tend to feminize animals like freshwater fish, rats, mice, and even humans,” said Justin Rhodes (GNDP), a professor of psychology. “However, no one has studied their effects on a fish whose sex is totally determined by the environment.”

A. ocellaris live in small groups with one alpha female, one beta male, and lower ranking non-reproductive males. Their sex is not genetically programmed and, instead, is dependent on environmental cues: A male transforms into a female if the female is removed from the group or if males are paired together.

“We looked at these fish specifically because they can transition from male to female helping us understand how BPA and EE2 can affect reproduction,” said Sarah Craig, an undergraduate research assistant in the Rhodes group.

The researchers paired sexually immature, male fish and fed them twice daily with normal food, food containing BPA, or EE2. There were 9 pairs of fish per group and they were monitored for six months. The amount of BPA and EE2 were determined based on the environmental concentrations of these chemicals.

“Since these fish are able to change their sex, we looked at different indicators such as behavior, gene expression in the brain, and hormone levels,” said Abigail Histed, an undergraduate research assistant in the Rhodes group. “Interestingly, other than behavior, we found a feminizing effect in all the other categories.”

The researchers found that fish that were fed BPA had no testicular tissue, lower androgen levels, just like female fish, and increased expression of genes in the brain that are responsible for feminization. Surprisingly, although females tend to be more aggressive, BPA decreased aggression in these fish. In contrast, the effects of EE2 were similar, but less pronounced.

“In nature, the females are very aggressive and do not tolerate the presence of other females,” Rhodes said. “We discovered that although BPA is feminizing the gonads, the fish are not that aggressive and can live with each other. These results suggest that the feminization in the brain occurs independently of gonadal hormones.”

It is still unclear how BPA is exerting its effects. In other studies BPA was thought to bind to estrogen receptors. However, since EE2 is an estrogen mimic and had subtle effects, the researchers believe that BPA has other additional effects. “BPA could be affecting other hormone receptors or interfering with androgen signaling. It could be a mix of different effects and we don’t know yet,” Rhodes said.

The implications of the findings, however, are clear. “These fish can only change their sex from male to female. If BPA is turning them female in the wild, they can’t go back to being a male and that can influence their population numbers,” Gonzalez said.

The researchers are interested in investigating the effects of EE2 further. Specifically, they would like to use higher concentrations of EE2 because they are concerned that the administered levels were not high enough. They would also like to follow the fate of these fish for longer since the fish normally take more than six months to mature completely.

“A longer time frame would be better to compare the degrees of feminization with BPA compared to natural feminization. Maybe they do eventually fight and kill each other and it’s something we missed with a shorter time frame,” Rhodes said.

The study “Impact of bisphenol-A and synthetic estradiol on brain, behavior, gonads and sex hormones in a sexually labile coral reef fish” was published in Hormones and Behavior.