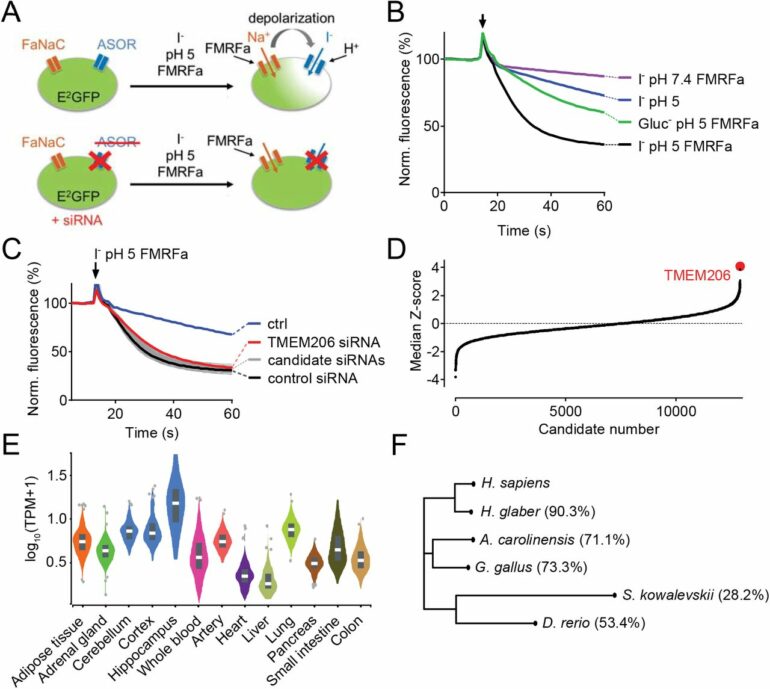 Since the discovery of the chloride ion channel ASOR three years ago, researchers have been searching for its biological functions.

Now, the team led by Prof. Thomas Jentsch at the FMP and MDC in Berlin discovered that ASOR is essential for the shrinkage of macropinosomes—particularly large vesicles that take up large amounts of extracellular fluid, including ions and proteins, in a non-specific manner. This process is especially important for certain immune and cancer cells. Indeed, under nutrient-poor conditions, growth of tumor cells lacking ASOR was enhanced. The work also presents for the first time a consistent model for the ion-dependent shrinkage of these vesicles. The results were published in Nature Cell Biology.

Our cells constantly take up water, salts, and nutrients. In addition to a specific, protein-mediated transport across the outer cell membrane, this uptake occurs through the budding of small vesicles from the (plasma) membrane that engulf extracellular fluid. The enclosed substances are further processed in the cell or transported back to the extracellular medium by small vesicles that pinch from the endocytic vesicle. Macropinosomes are particularly large vesicles formed as a consequence of a special form of endocytosis called macropinocytosis. This process occurs in virtually all cells, but is exceptionally pronounced in specialized immune cells (macrophages) and tumor cells.

The maturation of vesicles and the processing of enclosed materials requires vesicle shrinkage. This cannot be achieved solely by budding off small vesicles. Water, which is osmotically driven by passive salt transport through ion channels, must leave the vesicles. In the absence of osmotic shrinkage, smaller vesicles cannot pinch off due to high membrane tension. A few years ago, a Canadian group demonstrated that two specific endosomal sodium channels are required for macropinosome shrinkage. However, the identity of the chloride channel(s) that are essential for overall electroneutral efflux of NaCl, remained enigmatic. Suggested candidates for these transporters were CLC chloride proton exchangers, the volume-regulated anion channel VRAC, as well as ASOR, proteins that were all cloned in the lab of Thomas Jentsch.

In their newest work, Jentsch’s team at the Leibniz Research Institute for Molecular Pharmacology (FMP) and the Max Delbrück Center for Molecular Medicine (MDC) now showed that neither CLCs nor VRAC are important for vesicle shrinkage. ASOR clearly plays the major role. Jentsch’s group had cloned this acid-sensitive ion channel only in 2019.

Shrinkage is regulated by the acid-sensitive channel and pH

“We have now been able to show that ASOR is crucially required for macropinosome shrinkage,” says Thomas Jentsch. “All other candidates we investigated had no effect.” Thus, Jentsch and his team were able to assign an important biological function to the “Acid-Sensitive Outwardly Rectifying Anion Channel.”

To study the process, the researchers isolated macrophages from different knock-out mouse lines they had generated previously. Each of the mouse strains lacked a specific chloride transporter. The shrinkage of macropinosomes, which have diameters of 1 to 3 micrometers, can be followed by light microscopy in live videos. Using this approach, it became clear that vesicles from ASOR knock-out mice shrank much slower than those from wild-type mice, and that their shrinkage is pH-dependent. Alkalinization of macropinosomes impaired the volume loss.

“This makes sense because ASOR is activated by acid,” said the study’s first author Mariia Zeziulia. “Meanwhile, we know that ASOR does not only occur in the plasma membrane, where the well-regulated extracellular pH almost never reaches the acidic values necessary for channel activation, but is also present on various intracellular organelles, endosomes, which are known to be acidified. Thus, luminal acidification—in addition to the two sodium channels and ASOR—plays a very important role in the shrinkage of these vesicles,” the scientist summarizes the main results.

The researchers integrated ASOR, the sodium channels, and vesicle acidifying transport processes into a simple mathematical model. Not only did this enable them to check the plausibility of the proposed mechanism, but also allowed semi-quantitative predictions of parameters that are difficult to measure, such as the dynamically changing electrical voltage across the vesicle membrane. “The mathematical model predicts our results very nicely. For the first time we have a consistent model for the shrinkage of these vesicles,” explains Thomas Jentsch.

But what is the shrinkage of vesicles actually good for? It is necessary for the budding of transport vesicles, which, among other things, enable the transport of ingested substances back to the outside. This recycling allows them to escape degradation by enzymes from lysosomes, which fuse with macropinosomes at a later stage. Important surface proteins such as signal receptors also need to be recycled. On the other hand, degradation of ingested proteins is important for the nutrition of certain classes of tumor cells. Moreover, it serves to produce protein fragments that are necessary for antigen recognition by immune cells. Degradation and recycling must be balanced according to the cell demands.

In experiments with tumor cells, the scientists could show what may happen if this sophisticated mechanism does not function properly: Cells in which ASOR was eliminated grew faster when extracellular amino acids were absent, but extracellular proteins were present. Why? Reduced shrinkage means less recycling, so the tumor cells were able to obtain more proteins from the otherwise nutrient-poor environment. These proteins prominently include albumin, which is physiologically present in high concentrations. “Macropinocytosis is overactive in tumors carrying mutations in the oncogene K-RAS,” Thomas Jentsch explains. “This leads to increased uptake of extracellular proteins by tumor cells. These are then degraded by lysosomes to amino-acids which are used for nutrition and cell growth. Public tumor databases support this conclusion: pancreatic cancer patients had lower survival rates if their tumor contained less ASOR. “

In the next step, the Berlin researchers aim at investigating other transporters and also water channels that may also be involved in the shrinkage of macropinosomes. New data will complete the vesicle model.