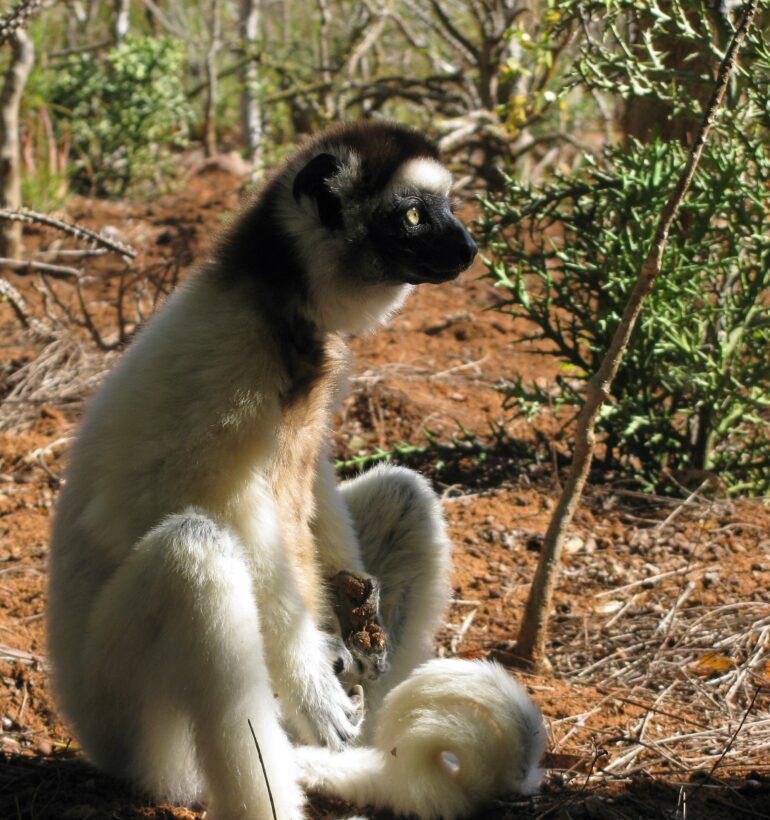 A large-scale study of 47 species of monkeys and lemurs has found that climate change and deforestation are driving these tree-dwelling animals to the ground, where they are at higher risk due to lack of preferred food and shelter, and may experience more negative interaction with humans and domestic animals.

The study, slated to publish Oct. 10 in the journal Proceedings of the National Academy of Sciences (PNAS), was led by Timothy Eppley, Ph.D., a postdoctoral associate at San Diego Zoo Wildlife Alliance (SDZWA), and examined more than 150,000 hours of observation data on 15 lemur species and 32 monkey species at 68 sites in the Americas and Madagascar. This study was a remarkable worldwide collaboration, including 118 co-authors from 124 unique institutions.

“This study began with a discussion among colleagues about how we’d noticed certain populations of arboreal primates spending more time on the ground,” said Dr. Eppley, “yet at sites with relatively less disturbance, members of the same species may never descend to the ground.”

The authors estimated the influence of ecological drivers, including potential human-induced pressures and/or species-specific traits, on the level of terrestriality (time spent on the ground) in arboreal primates. The study found that primates that consume less fruit and live in large social groups were more likely to descend to the ground. The authors suggest that these traits act as a potential “pre-adaptation” to terrestriality. Furthermore, primates living in hotter environments, and with less canopy cover, were more likely to adapt to these changes by shifting toward more extensive ground use.

Many of these species are already burdened with living in warmer, fragmented and heavily disturbed environments that often have fewer available dietary resources. As climate change worsens and arboreal habitats diminish, the study suggests primates consuming a more generalized diet and living in larger groups may more easily adapt to a terrestrial lifestyle.

“It’s possible that spending more time on the ground may cushion some primates from the effects of forest degradation and climate change; however, for the less-adaptable species, fast and effective conservation strategies will be necessary to ensure their survival,” Eppley said.

The study also found that primate populations closer to human infrastructures are less likely to descend to the ground. Luca Santini, Ph.D., from Sapienza University of Rome, one of the two senior authors of the study, said, “This finding may suggest that human presence, which is often a threat to primates, may interfere with the natural adaptability of the species to global change.”

The transition from an arboreal to terrestrial lifestyle has occurred previously in primate evolution, but today’s rapid changes are a serious threat.

“Though similar ecological conditions and species traits may have influenced previous evolutionary shifts of arboreal primates, including hominins, to ground living, it is clear that the current pace of deforestation and climate change puts most primate species in peril,” said Giuseppe Donati, Ph. D., of Oxford Brookes University, one of the senior authors of the study.

Nadine Lamberski, SDZWA Chief Conservation and Wildlife Health Officer, who was not involved in the study, remarked on the impressive scale of this collaborative scientific initiative.

“This is an extraordinary effort to convene 118 authors and review data of this magnitude. It is also a tremendous example of the insights that can be gleaned and strides that can be made when conservation is examined on a global scale,” Lamberski said.