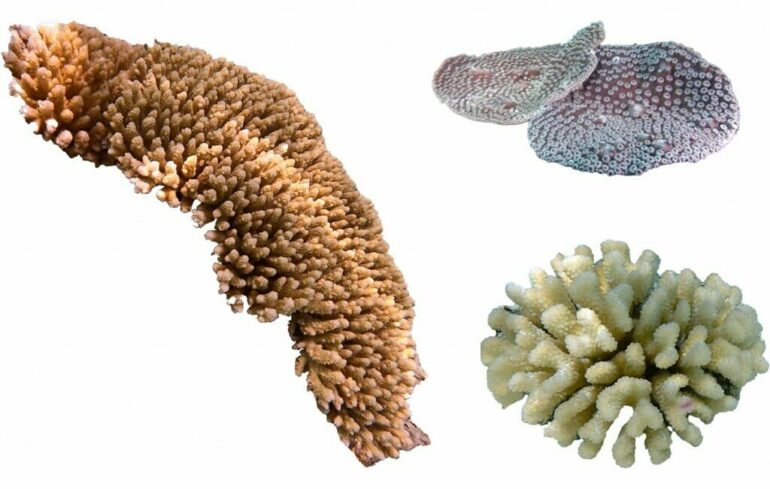 A new University of Wisconsin-Madison study has implications for predicting coral reef survival and developing mitigation strategies against having their bony skeletons weakened by ocean acidification.

Though coral reefs make up less than one percent of the ocean floor, these ecosystems are among the most biodiverse on the planet—with over a million species estimated to be associated with reefs.

The coral species that make up these reefs are known to be differently sensitive or resilient to ocean acidification—the result of increasing atmospheric carbon dioxide levels. But scientists are not sure why.

In the study, researchers show that the crystallization rate of coral skeletons differs across species and is correlated with their resilience to acidification.

“Many agencies keep putting out reports in which they say, ‘Yes, coral reefs are threatened,’ with no idea what to do,” says Pupa Gilbert, a physics professor at UW–Madison and senior author of the study that was published Jan. 17 in the Journal of the American Chemical Society. “Finding solutions that are science-based is a priority, and having a quantitative idea of exactly what’s happening with climate change to coral reefs and skeletons is really important.”

Reef-forming corals are marine animals that produce a hard skeleton made up of the mostly insoluble crystalline material aragonite. Aragonite forms when precursors made up of a more soluble form, amorphous calcium carbonate, are deposited onto the growing skeleton and then crystallize.

The team studied three genera of coral and took an in-depth look at the components of their growing skeletons. They used a technique that Gilbert pioneered called PEEM spectromicroscopy, which detects the different forms of calcium carbonate with the greatest sensitivity to date.

When they used these spectromicroscopy images to compare the thickness of amorphous precursors to the crystalline form, they found that Acropora, which is more sensitive to acidification, had a much thicker band of amorphous calcium carbonate than Stylophora, which is less sensitive.

A third genus of unknown sensitivity, Turbinaria, had an even thinner amorphous precursor layer than Stylophora, suggesting it should be the most resilient of the three to ocean acidification.

The thicker the band of uncrystallized minerals, the slower the crystallization process.

“If the surface of the coral skeleton, where all this amorphous calcium carbonate is being deposited by the living animal, crystallizes quickly, then that particular species is resilient to ocean acidification; if it crystallizes slowly, then it’s vulnerable,” Gilbert says. “For once, it’s a really simple mechanism.”

The mechanism may have worked out to be simple, but the data analysis required to process and interpret the PEEM images is anything but. Each pixel of imaging data acquired has a calcium spectrum that needs to be analyzed, which results in millions of data points. Processing the data includes many decision-making points, plus massive computing power.

The team has tried to automate the analysis or use machine-learning techniques, but those methods have not worked out. Instead, Gilbert has found that humans making decisions are the best data processors.

What’s new under the sun? Researchers offer an alternate view on how ‘novel’ structures evolve

Gilbert did not want to base conclusions off the decision-making of just one or two people. So she hired a group of UW–Madison undergraduates, most of whom came from the Mercile J. Lee Scholars Program, which works to attract and retain talented students from underrepresented groups. This team provided a large and diverse group of decision makers.

Dubbed the Cnidarians—from the phylum to which corals, anemones and jellyfish belong—this group of students became integral members of the team. They met several times a week via Zoom, when Gilbert would assign multiple students the same dataset to process in parallel and discuss at their next meeting.

“If multiple people come up with precisely the same solution even though they make different decisions, that means our analysis is robust and reliable,” Gilbert says. “The Cnidarians’ contributions were so useful that 13 of them are co-authors on this study.”