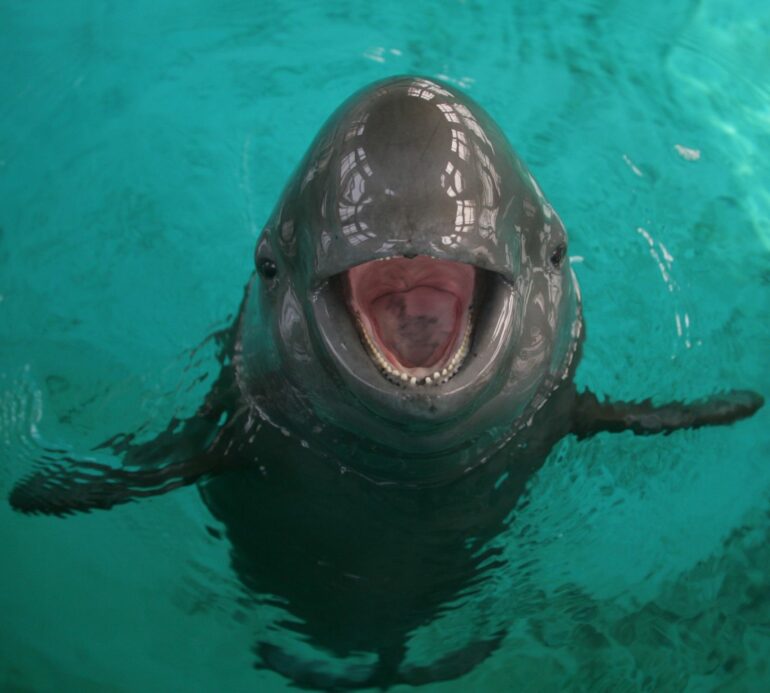 Over 50 billion tons of sand is mined every year—and it’s pushing species to the brink of extinction.

Researchers found that the Yangtze finless porpoise faced habitat loss and a reduced range as a result of the practice, but a suspension of sand mining offers hope that they could recover.

Our insatiable appetite for sand is pushing a critically endangered porpoise towards extinction.

After water, sand is thought to be the world’s most extracted natural resource, with a vast range of roles including manufacturing and coastal defense. Its extraction impacts a range of freshwater and marine habitats, but despite its prevalence the industry remains largely unregulated.

A new study, published in the journal Proceedings of the Royal Society B, shows that sand mining can have significant impacts on species that live in these ecosystems. Researchers found that populations of the Yangtze finless porpoise in Dongting Lake, China, were being found in increasingly smaller areas, likely as a result of sand mining.

Richard Sabin, the Museum’s principal curator of mammals and who was not involved in the study, says, “Everybody needs sand. It’s used for construction, glass manufacture, agriculture and much more, so there is enormous worldwide demand for it.”

“Unfortunately, the extraction of sand is a hugely damaging industry. Wherever it takes place, it can have a huge effect on the surrounding ecosystems. In the face of massive demand for raw materials by humans, we have to ensure that nature is protected.”

But the researchers also suggest that the porpoise is able to recover from these declines, if given the chance. Following a suspension of sand mining in the lake in 2017, the mammals returned to perturbed waters within two years, offering hope that their populations could begin to stabilize.

“Studies have shown that ecosystems and species can bounce back, when given the chance,” Richard adds. “The Yangtze finless porpoise has a slow rate of reproduction, but with appropriate support to restabilize the ecosystem upon which it depends, there’s every hope that it can recover.”

What is the Yangtze finless porpoise, and what threats does it face?

The Yangtze finless porpoise is the only freshwater porpoise in the world. A member of the cetaceans, the group of animals which also includes dolphins and whales, two species and three subspecies of finless porpoise are currently recognized.

“The most widely distributed member of this taxonomic group is the Indo-Pacific finless porpoise,” Richard explains. “This is found in a long strip of ocean from the Persian Gulf around to the East China Sea, and tends to inhabit fairly shallow coastal waters.”

For thousands of years the porpoises have lived in these waterways, consuming a range of fish. But as humans have begun to settle along the rivers, the porpoise’s close proximity to man has put it under pressure.

“It’s been known for a long time that the Yangtze finless porpoise is the most critically endangered of its taxonomic group,” Richard says. “Rivers are prime for exploitation in terms of damming for energy production, food harvesting and dumping effluent, and these can all put pressure on freshwater cetaceans.”

“It’s not that long since the Yangtze River dolphin was lost, and we don’t want this porpoise to meet the same fate.”

Overfishing, increased shipping traffic and noise pollution have all been linked with the decline of the porpoise, which only breeds once every 18 months or so. Its slow reproductive rate is one of the factors considered in a 2012 paper which suggests the species has an 86% chance of becoming extinct in the next century.

The threat of sand mining adds another factor to be considered. While the practice has been taking place for many years, the number of sand mining vessels on Dongting lake grew substantially after 2006, reaching a peak of 80 in 2013 when almost 70% of the lake was being mined for sand.

Can the Yangtze finless porpoise recover?

The researchers behind the current study of the porpoises conducted a number of surveys between 2006 and 2019 in Dongting lake, which is connected to the Yangtze River by a channel, using counts, acoustic surveys and the study of satellite images.

They found that sand mining was increasingly dividing up the population, with gaps between porpoises reaching as far as 27 kilometers in 2009. This is over a third of the porpoise’s entire range in the lake, and could increase stress among the animals, particularly during pregnancy.

The researchers also found that the porpoise stopped being seen passing under the Dongting Lake Bridge and entering the channel that leads to the main body of the Yangtze River.

They suggested that the sheer number of mining boats on the water meant that they formed an effective barrier across the waterway, which could also prevent the porpoise’s prey fish from reaching the lake.

However, there was room for optimism in the surveys. Sand mining on the lake was banned in 2017, and access to the Yangtze River restored, which has seen the porpoise return to areas of the lake it had previously avoided.

“The suspension of sand mining in 2017 was a very positive move, and could give this important ecosystem a chance to recover,” Richard says. “It shows that nature can be given room to thrive even in one of the world’s most rapidly industrializing countries, and hopefully the Yangtze finless porpoise will start to recover.”

The situation of the Yangtze finless porpoise stands in stark contrast to the vaquita, a critically endangered porpoise found in Mexico. Fewer than 10 of this species are thought to survive as a result of being caught in gillnets, with fishing bans having so far proved ineffective.

Only by allowing space for nature, and limiting our impacts on ecosystems, will these rare porpoises have a chance of survival.