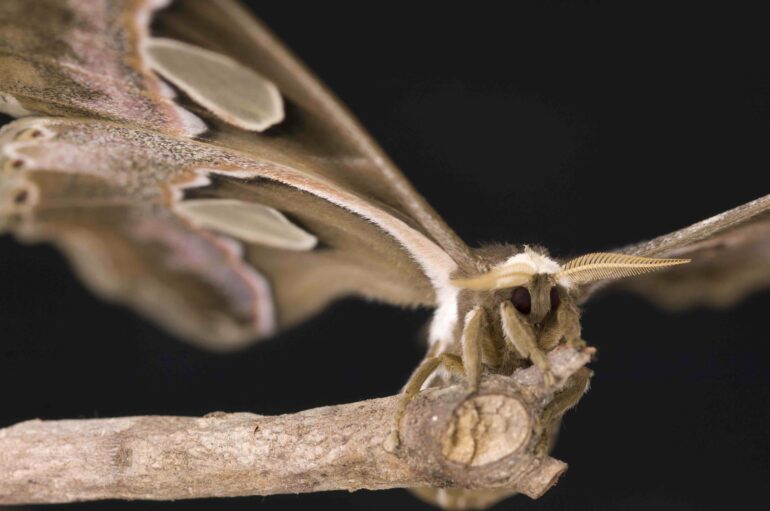 With some home security software and a little ingenuity, researchers have developed an inexpensive device that will allow them to study the behavior and activity of insects in regions of the world where they’re most diverse.

Insects are easily the largest group of organisms on the planet, and with species inhabiting every continent, including Antarctica, they’re also ubiquitous. Yet compared to birds and mammals, scientists know very little about when most insects are awake and active, which is especially true of nocturnal species that fly under the obscuring veil of darkness.

“Most of what we know regarding insect behavior is from species that are active during the day,” said Akito Kawahara, curator of the McGuire Center for Lepidoptera and Biodiversity at the Florida Museum of Natural History and co-author of a new study describing the device. “We study butterflies, bees and ants because we can see them, but there are hundreds of thousands of nocturnal insects out there, all of which have been nearly impossible to track until now.”

Knowing when organisms are most active is the foundation for understanding their behaviors and circadian rhythms—patterns that determine when they look for food, reproduce, pollinate flowers and more. Without this basic information for insects, it’s harder to predict or determine how changes in the environment, like an increase in light pollution, might impact them.

But the tinier the animal, the harder it is to track. Insects are generally too small to carry around tracking devices that would cue in biologists to their movements. Instead, researchers have to lure them in with baits or lights, which only paint a partial picture of their activity.

“You might think a moth is nocturnal because it’s only been seen at night, but that doesn’t mean it’s not out during the day. It just might not have been seen,” said lead author Yash Sondhi, a Ph.D. student at Florida International University co-advised by Kawahara. “We wanted to look past the standard nocturnal or diurnal categories that could be an oversimplification.”

For years, Kawahara tried to find a portable device that would allow him to track insects while working in the field with his collaborator Jesse Barber at Boise State University, at times even attempting to outsource the work to companies in the hopes they could build it for him. But equipment sensitive enough to measure the delicate movements of the smallest moths while being durable enough to hold up in harsh environments and remote locations without electricity or internet proved difficult to engineer.

So when Sondhi offered to try creating it himself, Kawahara was thrilled. “We had put the project aside, but Yash was able to come along and build the device we’d always envisioned,” he said.

Sondhi gathered a microcomputer, open-source motion tracking software, sensors, a camera and all-important infrared lights that don’t disturb or confuse insects. He housed all of this in a mesh cage that looks like a laundry hamper, and the portable locomotion activity monitor, called pLAM, was born.

After using pLAM to monitor insect activity in the lab to ensure the equipment was running smoothly, Sondhi and Kawahara tested it on a research trip to Costa Rica. They collected 15 species, placing between four and eight moths of each into the activity monitors.

Sondhi says one of the most interesting examples was a species of tiger moth. It’s assumed these brightly colored, toxic moths are exclusively out during the day, because predators steer clear of them and they can move about without fear of being eaten. However, data from the activity monitors revealed they’re also active at dusk. After all, they have to escape other predators who come out at nightfall, like bats.

“It was so cool to see the different activity patterns,” Sondhi said. “Not everything is as black and white as we think. Now, we can predict and better understand what’s driving when insects fly. The goal is to quantify when they are active and then associate that with their traits—for example, if a moth is dull-colored, beige, does that mean it’s strictly nocturnal?”

Kawahara is optimistic that the new device will help inform efforts to stave off the recent global trend of insect decline and extinction. “The baseline data that we need to understand the activity of small insects and other organisms is so limited,” he said. “We talk about how light pollution, noise pollution and climate change impact insects, but we don’t know anything about how it affects their activity because we haven’t been able to monitor activity for most insect species. This device will allow us to collect that information.”

This year, Sondhi will be using this new tool to continue his National Geographic-funded research on how moths respond to light pollution. He’s collected data on the differing light levels at several field sites in India. Now, he can examine how light pollution could be confusing moths, interfering with their natural circadian patterns and impacting when they are active.

The research was published in Methods in Ecology and Evolution.