DNA sequence enhances our understanding of the origins of jaws 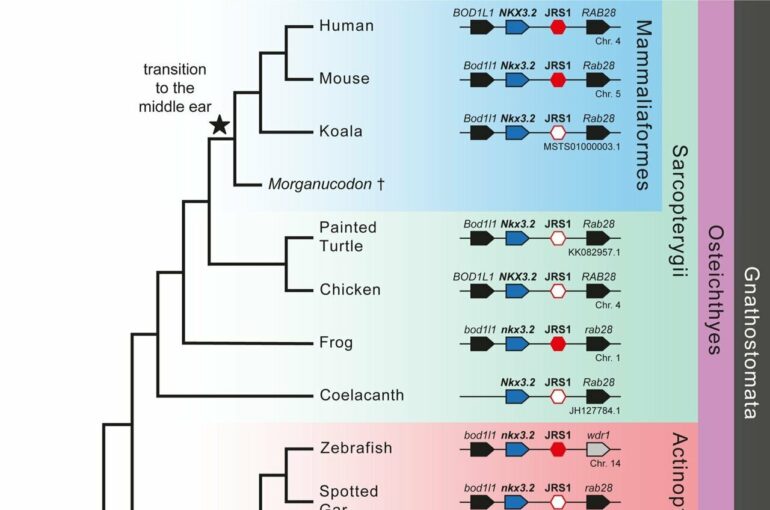 The vast majority of vertebrate species living today, including humans, belong to the jawed vertebrate group. The development of articulating jaws during vertebrate evolution was one of the most significant evolutionary transitions from jawless to jawed vertebrates, taking place at least 423 million years ago. The lower and upper jaws were initially connected by the primary jaw joint. However, during the evolution of mammals, this moved to the middle ear to enhance hearing and was replaced by the secondary jaw joint, which is how humans are constructed today.

The primary jaw joint is formed during embryonic development and has an active gene which contains sequence information for a specific protein—transcription factor Nkx3.2. This protein has long been thought to have played a major role in the evolution of this jaw joint, but little was known before about how its gene activity is regulated in the jaw joint cells.

Typically, genes are activated with help from DNA sequences, known as enhancers, that do not contain gene sequence information. Furthermore, such “regulatory” DNA can contribute to the activation of the gene only in a certain cell type and can be conserved among different animal species.

“We searched through the genome sequences of many different vertebrate species and only found the DNA sequence near the Nkx3.2 gene in jawed vertebrates—not in jawless ones. When we injected these DNA sequences from jawed vertebrates into zebrafish embryos, they were all activated in the jaw joint cells. The fact that their ability to activate has been preserved for over 400 million years shows how important it is for jawed vertebrates,” notes Tatjana Haitina, researcher at Uppsala University, who led the study.

“In experiments where we deleted the newly discovered DNA sequence from the zebrafish genome using the CRISPR/Cas9 technique, we saw that the early activation of the Nkx3.2 gene was reduced, which caused defects in the jaw joint shape. It turned out that these defects were later repaired, suggesting that there is additional regulatory DNA somewhere in the genome that controls the activation of the Nkx3.2 gene and is waiting to be discovered,” adds Jake Leyhr, doctoral student student in the research team.

The researchers hope that their discovery is an important step towards eventually understanding the process behind the origins of vertebrate jaws.

The research was published in eLife.

‘Soft’ CRISPR may offer a new fix for genetic defects


Citation:
DNA sequence enhances our understanding of the origins of jaws (2022, November 25)