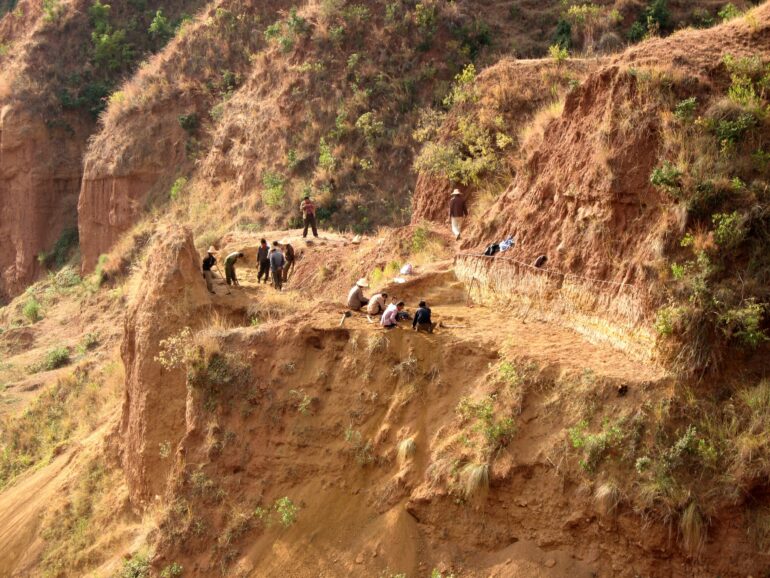 A team of scientists has discovered the earliest gibbon fossil, a find that helps fill a long-elusive evolutionary gap in the history of apes.

The work, reported in the Journal of Human Evolution, centers on hylobatids, a family of apes that includes 20 species of living gibbons, which are found throughout tropical Asia from northeastern India to Indonesia.

“Hylobatids fossil remains are very rare, and most specimens are isolated teeth and fragmentary jaw bones found in cave sites in southern China and southeast Asia dating back no more than 2 million years ago,” explains Terry Harrison, a professor of anthropology at New York University and one of the paper’s authors. “This new find extends the fossil record of hylobatids back to 7 to 8 million years ago and, more specifically, enhances our understanding of the evolution of this family of apes.”

The fossil, discovered in the Yuanmou area of Yunnan Province in southwestern China, is of a small ape called Yuanmoupithecus xiaoyuan. The analysis, which included Xueping Ji of the Kunming Institute of Zoology and the lead author of the study, focused on the teeth and cranial specimens of Yuanmoupithecus, including an upper jaw of an infant that was less than 2 years old when it died.

Using the size of the molar teeth as a guide, the scientists estimate that Yuanmoupithecus was similar in size to today’s gibbons, with a body weight of about 6 kilograms—or about 13 pounds.

“The teeth and the lower face of Yuanmoupithecus are very similar to those of modern-day gibbons, but in a few features the fossil species was more primitive and points to it being the ancestor of all the living species,” observes Harrison, part of NYU’s Center for the Study of Human Origins.

Ji found the infant upper jaw during his field survey and identified it as a hylobatid by comparing it with modern gibbon skulls in the Kunming Institute of Zoology. In 2018, he invited Harrison and other colleagues to work on the specimens stored in the Yunnan Institute of Cultural Relics and Archaeology and the Yuanmou Man Museum that had been collected over the past 30 years.

“The remains of Yuanmoupithecus are extremely rare, but with diligence it has been possible to recover enough specimens to establish that the Yuanmou fossil ape is indeed a close relative of the living hylobatids,” notes Harrison.

The Journal of Human Evolution study also found that Kapi ramnagarensis, which has been claimed to be an earlier species of hylobatid, based on a single isolated fossil molar from India, is not a hylobatid after all, but a member of a more primitive group of primates that are not closely related to modern-day apes.

“Genetic studies indicate that the hylobatids diverged from the lineage leading to the great apes and humans about 17 to 22 million years ago, so there is still a 10-million-year gap in the fossil record that needs to be filled,” Harrison cautions. “With continued exploration of promising fossil sites in China and elsewhere in Asia, it is hoped that additional discoveries will help fill these critical gaps in the evolutionary history of hylobatids.”