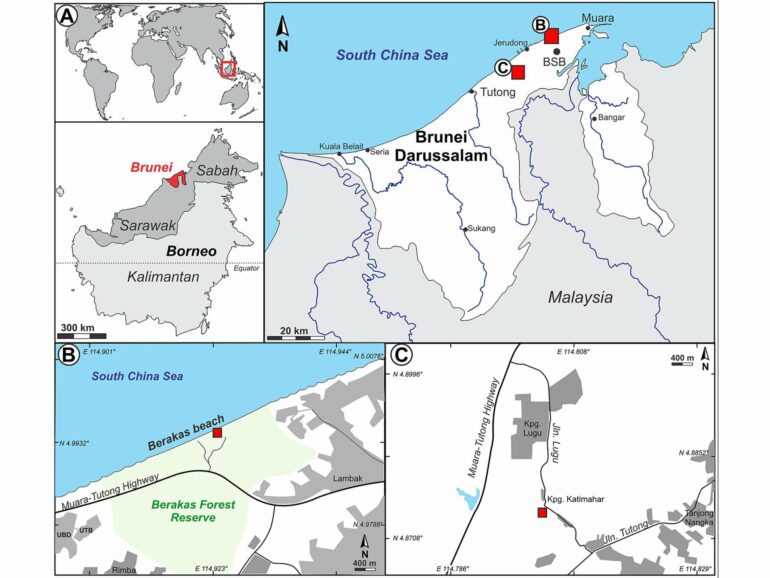 The first study of leaf fossils conducted in the nation of Brunei on the island of Borneo has revealed that the current dominant tree group, the dipterocarps, has dominated the rainforests for at least 4 million years, according to an international research team led by Penn State in partnership with Universiti Brunei Darussalam. The findings, published in the journal PeerJ, suggest that the current landscape is similar to what was present during the Pliocene Epoch, 5.3 to 2.6 million years ago, and may provide additional justification for conservation of these forests that support many critically endangered species.

“This is the first demonstration that the characteristic dominant life form of Borneo and the entire Asian wet tropics, the dipterocarp trees, was not only present but actually dominant. We found many more fossils of dipterocarps than any other plant group,” said Peter Wilf, professor of geosciences in the Penn State College Earth and Mineral Sciences and a co-funded faculty member in the Institutes of Energy and the Environment (IEE).

The dipterocarps are the world’s tallest tropical trees, and the largest of them can reach 100 meters (328 feet) in height, approximately the height of a 22-story building.

Wilf said the dipterocarps include hundreds of keystone species that support tropical Asia’s critically endangered biodiversity by structuring rainforests and providing enormous food resources through pollination and their nutritious seeds. Borneo has almost 270 dipterocarp species, more than half the world’s total.

Past studies of the island’s plant life generally involved fossil pollen, which is very resistant to decay. However, because dipterocarp pollen often does not preserve well, that data does not provide complete information on ancient plant landscapes in the Asian tropics, according to Wilf. This study provided ample fossil evidence from both leaves and pollen, at two sites that the team discovered after intensive reconnaissance in Brunei, that supports the idea that the current landscape’s diverse, well-structured vegetation is similar to what was present during the Pliocene Epoch, 5.3 to 2.6 million years ago.

Ferry Slik, a professor at the Universiti Brunei Darussalam who studies tropical forest ecology and is a co-author on the paper, said this is an extremely important study of the country’s fossil flora.

“There are very few fossil studies from the Asian tropics,” Slik said. “I hope this study will stimulate more research efforts on fossils in the tropics as they will tell us a lot about the natural history of the region.”

Wilf and his team unearthed a wide variety of fossil leaves and fruits, including many plant groups that are native today but had not been found before as fossils in the Malay Archipelago. These included three different genera of dipterocarps, such as Dryobalanops, whose species are nearly all threatened; understory plants such as the jujube Ziziphus and melastomes; and a climbing aroid plant, Rhaphidophora, that is related to the popular house plant Monstera.

Slik said the team reconstructed an ancient ecosystem almost exactly like what is found in Brunei today.

“With the pollen included, we’re getting a fairly complete representation of mangrove and swamp environments, bordered by tropical lowland dipterocarp rainforests with very diverse fern understories and lots of climbing plants, including more ferns, jujubes and aroids. So we’re getting to actually seeing what the environment was like millions of years ago,” Wilf said. “It was very much like what you can find there now, although those habitats have been cut down across much of tropical Asia.”

Wilf said one of the motivations for doing this study was to encourage conservation of these areas.

“The tropical rainforests are where biodiversity is. Brunei is about the size of Delaware, but it has more than seven times the plant diversity of all of Pennsylvania,” he said. “This area has an ever-wet climate similar to the Amazon or the central African rainforests. It is home to spectacular animal life such as proboscis monkeys, crocodiles, rhinoceros hornbills, clouded leopards, sun bears, flying lizards, bearded pigs and slow lorises.”

Although Borneo is one of the great biodiversity hotspots on Earth and its rainforests are ancient, its biodiversity is shrinking due to logging, agricultural conversion, and climate change.

The dipterocarp trees are highly sought after by the logging industry, and Borneo suffers from high deforestation rates, said Slik, who is working to improve Asia’s tropical ecosystems.

“Borneo, and much of the Asian rainforests, are ground zero of the biodiversity crisis,” Wilf said. “However, Brunei is a jewel in the system because it is one of very few countries in the region that still preserves more than half of its old growth rainforests.”

According to Wilf, each paleontological discovery highlights the importance of history and provides foundational support for setting up conservation areas and educating the public.

“If a living group has a known paleo history, it has added preservation and educational value, and it’s less likely to be destroyed,” he said. “Paleontology provides the primary evidence for how and why life on Earth is distributed the way it is and when different groups of plants and animals arrived.”