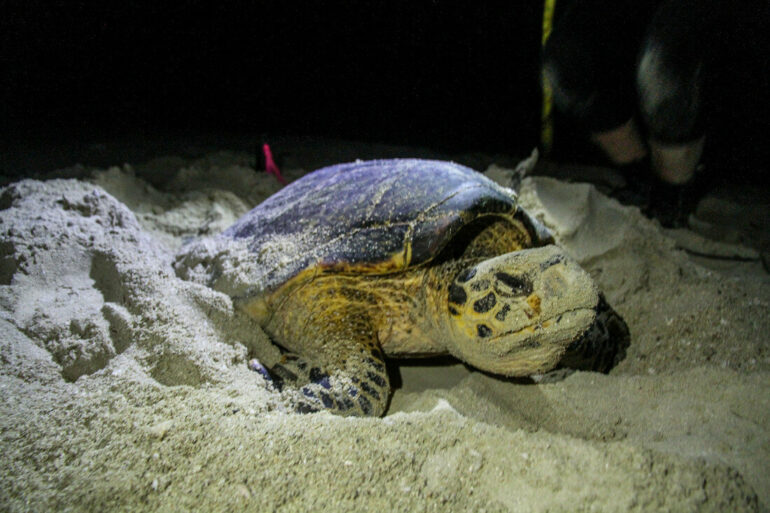 The distribution of ancient turtles from when the planet was warmer than today is helping scientists to anticipate how living turtles may respond to environmental change.

Future predictions of global warming means that current turtle habitats are likely to become unsuitable, but new areas could become available if turtles are able to adapt in time.

With global temperatures predicted to exceed 1.5°C above pre-industrial levels in the next few decades, rapid environmental change is expected to have a devastating effect on animals and plants worldwide. However, determining how different species will be affected is difficult to anticipate.

A new study published in Current Biology looks at the distribution of fossilized terrestrial and freshwater turtles over the past 100 million years during periods when temperatures were much warmer than they are today. The researchers then used this information to project forward and predict how modern-day turtles may respond to future climate scenarios.

Professor Paul Barrett, a paleobiologist at the Museum and senior author of the study, says, “What we find is that many of the areas where turtles are particularly diverse at the moment will become drier and hotter due to man-made global warming. As a result, those areas will become less suitable for these animals to live there.”

“On the other hand, as the world warms other places may become habitable for turtles that would not have been suitable previously. Then they could migrate to different areas, but that depends on if they can do it in time, unobstructed by human interference.”

Can we predict how turtles will respond to environmental change?

Turtles are a group of reptiles found on every continent except Antarctica. They include sea turtles, terrapins and tortoises and are made up of species that live on the land and in salt and fresh water.

As cold-blooded animals, turtles cannot generate their own heat and so rely on their surroundings to regulate body temperature. Therefore, their distribution and species diversity are closely linked to environmental conditions.

Previous research has looked at the distribution of fossil turtles and compared them to climate models from those time periods. The study revealed that the conditions of areas occupied by ancient turtles were similar to those of living species.

“Our latest research goes one stage further,” explains Paul. “We wanted to know what would happen to the distribution of turtles in worlds that are warmer than today.”

“We looked at two time periods over the last 100 million years during the warmest parts of the Cretaceous and Eocene. We then took that information and projected forwards to a world that’s 1.5°C warmer than now, which is predicted to happen in the coming decades.”

Turtles have a surprisingly good fossil record compared to many other organisms because their shells preserve relatively well. This gives scientists a good idea of what their distribution would have been like in the past.

Dr. Alfio Alessandro Chiarenza, a researcher at the University of Vigo and lead author of the study, says, “Turtles are extraordinary biological models for understanding the biogeography of living animals because of their long evolutionary history, which probably pre-dates the dinosaurs.”

“This means they faced and survived a plethora of environmental changes. So we wondered whether that could also tell us something relevant for their conservation in the wake of the ongoing anthropogenic climate change.”

How will turtles respond to climate change?

Turtles are resilient animals, having been around for 230 million years and weathering many mass extinctions, including the one that killed the dinosaurs. But their future is threatened once again as humans radically alter the environment.

“By looking at modern and fossil distribution of turtles and reconstructing their ideal climatic conditions, we found that in the past, turtles moved towards the pole at times of global warming,” says Alfie “If we project the ideal conditions where turtles could live with future emission scenarios, by 2100 we expect these animals to reach similar high latitudes.”

“Unfortunately, the rate at which this change is happening might be too fast for evolutionary time scales. Additionally, many of these high-latitude areas correspond to the densely human-populated temperate zones, so our own distribution and pressure in these areas may further hamper their survival.”

“By looking at deep time history and merging modern biological knowledge with paleontology, we may provide additional guidance in the conservation of this group of reptiles.”

Citation:
Fossils give clues as to how turtles might respond to a warming planet (2022, December 22)