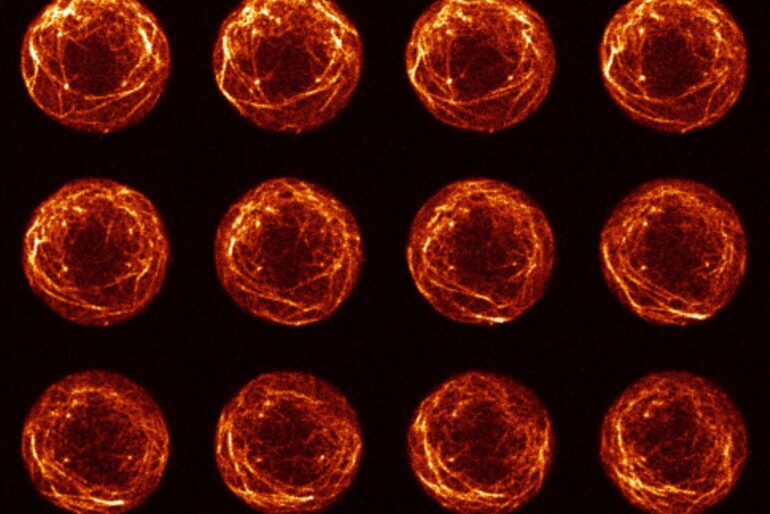 “A lot of the background in this field has been established by studying how cells move in culture, and there’s this model that they move by using their cytoskeleton to push out their membranes to crawl,” said Benjamin Lin, a postdoctoral researcher in the lab of Whitehead Institute Director Ruth Lehmann. “We weren’t so sure they were actually moving that way in vivo.”

Now, in a new paper published September 14 in Science Advances, Lehmann who is also a professor of biology at the Massachusetts Institute of Technology, and researchers at Whitehead Institute and the Skirball Institute at New York University School of Medicine show that germ cells in growing fly embryos are in fact using a different method of movement which depends on a process called cortical flow, similar to the way bulldozers move on rotating treads. The research also reveals a new player in the pathway that governs this germ cell movement. “This work brings us one step closer to understanding the regulatory network that guides the germ cells on their long and complex journey across an ever-changing cellular landscape,” Lehmann said.

The research could also provide researchers with a new model for studying this type of cell movement in other situations—for example, cancer cells have been shown to move via cortical flow under certain conditions. “We think there are more general implications for this mode of migratory behavior that go beyond primordial germ cells and apply to other migratory cells as well,” said Lin.

The first clue that Lehmann and Lin found that germ cells might not move the way scientists thought came from a simple observation. “When we began to study how these primordial germ cells move in the embryo, we saw that the cells actually remain shaped like a balloon while they’re moving and they don’t actually change their shape at all,” said Lin. “It’s really different from the crawling model.”

But if the cells weren’t moving by crawling, how were they moving through the embryo? To find out more, the researchers developed new techniques to image the germ cells in live fly embryos, and were able to watch clusters of a protein called actin moving backwards in each cell, as the cell itself was moving forward.

“There’s this thin layer of actin cytoskeleton just under the membrane of cells called the cortex, and they actually moved by making that cortex ‘flow,'” said Lin. “It’s like if you think of the tread of a bulldozer that’s moving backwards as the bulldozer is moving forward. The cells move that cortex backwards to generate friction to move the cell forward.”

Lin hypothesizes that this method of movement is especially well-suited to germ cells moving through a crowded embryo with many different cell types because instead of depending on recognizing specific proteins to “grab” in order to pull themselves through the embryo, it allows the germ cells to move independently. “Everything is pretty individualistic for primordial germ cells,” he said. “They don’t actually signal to each other at all, all the signaling is within each cell… And germ cells have to move through so many different tissues that they need a universal method of movement.”

A new role for a known protein

The researchers also found new information about how the cells control this form of motility. “We found that a protein called AMPK can control this pathway, which was really unexpected,” Lin said. “Most people know it as a protein that senses energy. We found that this protein was important for helping these cells navigate. It’s one of these upstream players that can control how fast the cell goes, and in which direction.”

In the future, the researchers hope to map the entire pathway that allows germ cells to get to the right place at the right time in development. They also hope to learn more about the mechanisms behind cortical flow. “We want to figure out what is important for establishing these flows,” Lin said. “Our findings here could have implications not just for germ cells, but for other migrating cells as well.”