Examining the individual signatures of the ‘whoops’ that hyenas make 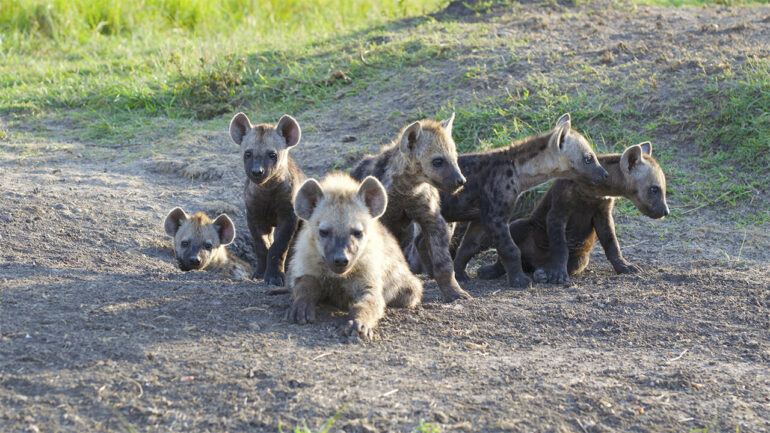 As dusk begins cloaking the Maasai Mara grasslands of southwestern Kenya, a spotted hyena slinks beneath the woody umbrella that is the acacia tree.

The carnivore pauses, its rounded ears cocking forward as a faint sound sails in, an airborne missive traversing three miles at 767 miles per hour. Again, then again. “Whhhhhooo-OOOppp!” There it is… the call of a fellow spotted hyena, repeated rapidly enough to warrant attention. A warning of lions in the area, maybe, or of one hyena clan encroaching on another’s territory.

To help or not to help? With so much ground to cover, and so much potential peril lying beyond it, the answer could depend on who, exactly, is on the other end of the long-distance call. For spotted hyenas, then, identification is no laughing matter. But it is a whooping one, says a new study from the University of Nebraska–Lincoln’s Kenna Lehmann and colleagues.

By applying machine learning to audio clips collected from the field, the team has concluded that hyena whoops feature signatures unique to individuals—a form of caller ID distinct enough that hyenas can likely tell one from another. For the first time, the researchers also managed to quantify how much repeating a call, as spotted hyenas do, might improve the odds of being identified.

The fact that spotted hyena clans are built on hierarchies of social rank, yet consist of multiple families that regularly come together and disperse across the savanna, makes individual identity especially important.

“Hyenas don’t treat every individual in the clan the same, so if they’re deciding whether to show up and help someone, they want to know who they’re showing up to help,” said Lehmann, a postdoctoral researcher at Nebraska.

An example of the hyena sounds studied can be heard here on SoundCloud.

In its search for vocal signatures, the team turned to what’s known as a random forest model. The researchers first trained the model by feeding it the identities of each hyena they had recorded, along with a massive number of acoustic traits extracted from each of its whoops.

From there, the model used a randomly selected series, or bout, of whoops from one hyena to generate decision trees. Each branch of a tree represented a binary choice in an acoustic trait from a batch that was also randomly selected. The model might begin by splitting the hyena whoops by higher vs. lower frequencies, for instance, then further divide those groupings into, say, longer vs. shorter calls, and so on. Ultimately, the tip of every branch represented a vote in favor of a particular hyena.

After assembling 500 of those haphazard decision trees—a random forest—the model predicted a given whoop’s identity based on which hyena received the most votes from those 500 trees. The team put its trained model to the test by asking it to identify which one of 13 hyenas produced a randomly selected bout of whoops, then repeated that test 999 times.

The model correctly paired a whoop bout with its hyena roughly 54% of the time, or about six times more often than would be expected by chance. That success rate suggests there’s enough variation in the whoops of different hyenas, and enough consistency within the whoops of a single hyena, for the model to reasonably tell them apart. And if the model can discern those differences, Lehmann said, it’s reasonable to presume that the hyenas can, too.

Three traits of the whoops seemed especially instructive: the duration of a call, the highest frequency of the call, and the average frequency during the portion of the call that was most consistent in pitch. The greater the disparity in those traits, the more likely the model—and potentially, hyenas themselves—would be to distinguish among the sources of the respective whoops.

Still, 54% is well short of 100%, even before accounting for the challenges inherent to communicating with a fellow hyena in the Maasai Mara. For one, spotted hyena clans can swell to more than 125 members, a number to seemingly strain even the most voluminous, airtight memories. There’s also the possibility of acoustic nuances getting lost in transmission, particularly when those signals are traveling multiple miles before reaching rounded ears. Wind, rain and other animal calls, meanwhile, can introduce noise to the signal.

“There’s an understanding that one of the ways to get your message across is to repeat it,” Lehmann said, “especially if you’re in a noisy environment or if you’re communicating over long distances.”

Prior research has shown that penguins, for example, reiterate their calls more often when the wind picks up. And other studies have found evidence that various animal species favor repetition under similarly noisy circumstances. But as far as Lehmann and her colleagues could tell, none had quantified the extent to which repeating an animal call might actually improve the transmission of information.

So the team again resorted to its random forest model. When the model guessed the identity of a hyena on the basis of just one whoop, it correctly pegged that identity only about half as often as it did when provided with three whoops. That accuracy rose even further with additional calls, peaking at seven whoops.

“It’s like getting a little bit more information (each time),” said Lehmann, who previously studied vocalizations in orcas. “The first time you hear it, you might notice: Oh, that was definitely a male or a female voice. Then, the next whoop, you might be able to narrow it down further.”

Lehmann and her colleagues knew that the calls of some animal species also contain signatures that differentiate the groups to which they belong from other same-species groups they might come across—somewhat akin to human accents or dialects. She recalled that some researchers studying orcas had become so familiar with pod signatures that the researchers could instinctively tell them apart. (One researcher claimed that a certain pod’s calls were “more nasally” than others’.)

Given the size of spotted hyena clans, Lehmann figured that their whoops, too, might employ a group-specific signature.

When the researchers went looking for a group signature in the random forest, though, they couldn’t find one. One potential explanation: The apparent ability to memorize so many individual signatures may have rendered a clan signature either useless or, at best, not useful enough to bother developing.

“If you know who the individual is, you know what group they’re in,” Lehmann said. “Animals are pretty good at associating that information.

“So if they need individual signatures for other reasons, then there just may have never been a need to also develop a group signature, which is what this finding suggests. They should be able to keep track of all the individual voices and be able to distinguish: If this is Individual X, they’re in my group. I can choose to help them based on them being a group member, but maybe there are more decisions to be made about whether they’re a group mate that I actually want to help.”

‘A million different stars that have to align’

All of the team’s findings—the presence of individual signatures, the absence of a clan signature, the utility of repetition—ultimately originated not from a random forest but from the savanna of Kenya’s Maasai Mara National Reserve. There, Michigan State University’s Kay Holekamp and colleagues have been conducting research on the spotted hyena since the late 1980s.

Lehmann herself spent a year in the Maasai Mara, which takes its name from the Maasai people who have long inhabited it. From 2014 to 2015, the then-doctoral student and several colleagues regularly drove west from Kenya’s capital, Nairobi, to a field site at the reserve.

Untangling the roots of plant genomes: Supporting a ‘moonshot’ for botany

“The first time I went out there … I thought, ‘Oh, I’m gonna be sleeping on the ground for 10 months, in a sleeping bag,'” said Lehmann, who soon learned that a sizable canvas tent and a soft bed awaited her. “But we were pretty spoiled out there, to be perfectly honest.”

If the accommodations were cushier than expected, the data collection proved anything but. From their vantage point in a Toyota Land Cruiser, Lehmann and her colleagues would point a directional microphone out the window and flip on an audio recorder. Unfortunately, the team was very much subject to the vagaries of Murphy’s law.

“You need to not be driving. And the car has to be turned off,” she said, noting that its engine drowned out the sounds of the Maasai Mara. “And the hyena has to whoop. And you have to be able to actually … see who it is. They can’t be in a bush. And they have to be close enough so that you can get a good recording. And the other hyenas need to be quiet at the same time. There are just, like, a million different stars that have to align to get a good recording that you can then use in an analysis like this.”

Under those circumstances, Lehmann said, patience was more than a virtue. It was a necessity.

“With this handheld recording equipment, we were opportunistically, constantly recording and just hoping that they whooped for us,” she said, laughing.

Over those months of hoping and waiting, the researchers stayed busy observing and chronicling behaviors that would inform other studies. As they did, they caught glimpses of the individuality that their analyses of the hyenas’ whoops would, years later, come to affirm.

“You definitely get to know that different individuals have different personalities or might react a certain way in different situations,” Lehmann said. “So it’s always fun to just get to know the hyenas and their little interactions and the dramas that might be going on in their lives.”

The team reported its findings in Proceedings of the Royal Society B.


Citation:
Examining the individual signatures of the ‘whoops’ that hyenas make (2022, September 16)