Going to ‘femoral head’ of class to explain dinosaur evolution 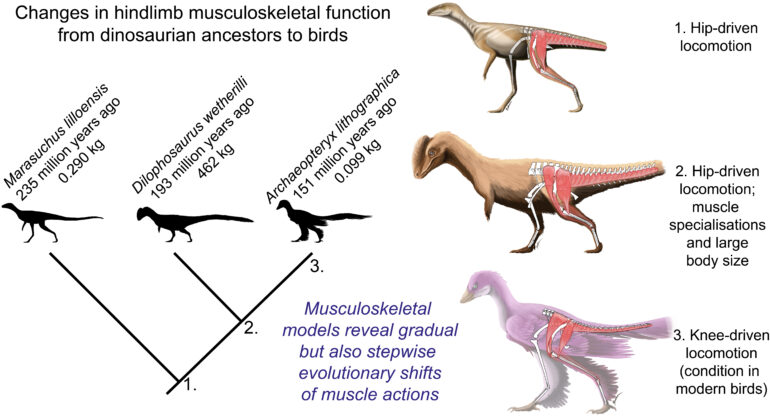 Dinosaurs—and birds—wouldn’t have been able to stand on their own two feet without some radical changes to their upper thigh bones. Now, a new study by Yale paleontologists charts the evolutionary course of these leggy alterations.

The findings resolve a longstanding question about dinosaur evolution and offer a prime example of how new physical features can pop up briefly during embryonic development and then give way to older, known features in adults.

For the study, a research team led by Yale’s Bhart-Anjan S. Bhullar and Shiro Egawa focused on evolutionary shifts in the “femoral head”—where the upper femur connects to the hip—across a wide range of dinosaurs, early reptiles and avians, and their modern-day counterparts. The study appears in Proceedings of the Royal Society B.

“We figured out the way in which the femoral head, a critical part of dinosaur anatomy, developed,” said Bhullar, associate professor of Earth & planetary sciences in Yale’s Faculty of Arts and Sciences and an associate curator at the Yale Peabody Museum of Natural History. “Inward-turned femoral heads are necessary for fast and effective, erect bipedal locomotion.”

For the new study, the researchers used 3D imaging to study femoral head development in a variety of fossils and animal embryos. Bhullar’s lab at Yale is particularly known for its innovative use of CT scanning and microscopy to create 3D images of fossils.

What they discovered is that evidence for both theories occurs together.

“The embryonic development of this major feature changed completely—even while the feature itself remained constant in adults for quite some time,” Bhullar said. “This sort of hidden shift in development might be more common than we think in evolution, and it should serve to caution against the widely held idea that features which develop differently must have evolved separately.”

Shiro Egawa, a former postdoctoral associate in Bhullar’s lab who is now a postdoctoral fellow at the National Center of Neurology and Psychiatry in Japan, is the study’s first author and co-corresponding author.