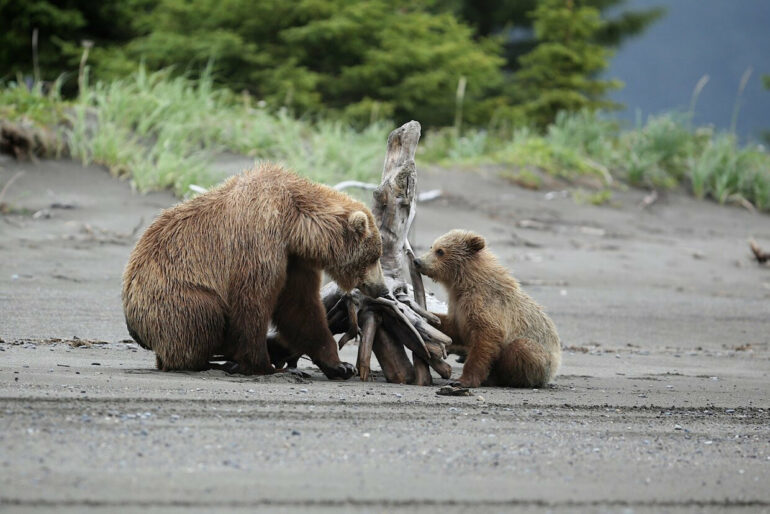 A recent study of the gut microbiome of Alaskan brown bears (Ursus arctos) shows that the microbial life in bears’ guts allows them to achieve comparable size and fat stores while eating widely different diets. The work sheds light on the role of the gut microbiome in supporting health in wild omnivores.

“We think of bears as having simple digestive tracts, so it’s easy to slip into thinking that they therefore have simple gut microbiomes,” says Erin McKenney, co-author of the study and an assistant professor of applied ecology at North Carolina State University. “But this study shows there can be tremendous diversity in the gut microbiomes between individual bears, and that this variation can be very important to the physical condition of these animals.”

“For example, the amount of fat that bears are able to store is absolutely critical to the health of wild populations,” says Grant Hilderbrand, co-author of the study and associate regional director for resources for the National Park Service in Alaska. “If female bears are able to reach levels where 19-20% of their body mass in the autumn is fat, they’ll reproduce. And knowing that they can take different dietary paths to reach those fat levels is a valuable insight.”

Previous research has demonstrated that the diets of bears in each park vary. Bears at Lake Clark generally eat a lot of berries, salmon and mammals, such as moose. Bears at Gates of the Arctic tend to eat seasonal vegetation and mammals, but have less access to fish. And bears on the coast of Katmai have the most diverse nutritional landscape, including a variety of vegetation, fish, and a wide range of marine species.

“The fact that these populations have distinct diets is valuable, because it allows us to understand the role that the gut microbiome plays in helping bears extract nutrition from very different food sources,” says Sarah Trujillo, corresponding author of the study and a former graduate student at Northern Michigan University (NMU).

“We found that bears benefit from having diverse dietary niches, and the gut microbiome does play a role in extracting nutrition from those diets,” Trujillo says. “Ultimately, that means that the bears in these parks were able to achieve very similar body conditions, despite eating very different things.”

“And because the parks are protected, well-conserved environments, this study can serve as a baseline for future research,” says Diana Lafferty, co-author of the study and an assistant professor of biology at NMU. “For example, researchers will be able to compare the gut microbiomes of bears in more disturbed systems—such as areas where bears have more access to garbage and human foods—to the data from this study.”

“This study is also important because it gives us a snapshot of bears and their diet in these parks,” Hilderbrand says. “The biggest conservation challenge we’re facing right now is climate change, and understanding what is happening now will help us identify and understand any changes that will take place moving forward.

“Knowing what bears are eating, and that these diverse diets can all be used to reach similar body conditions, can help us spot emerging challenges for these animals. It can also help us understand how many bears these ecosystems are capable of supporting, even as those ecosystems change.”

Was this hyena a distant ancestor of today’s termite-eating aardwolf?

The study, “Intrinsic and extrinsic factors influence on an omnivore’s gut microbiome,” will be published Sept. 22 in the open-access journal Scientific Reports. The paper was co-authored by Kyle Joly and Buck Mangipane of the National Park Service; Lindsey Mangipane, David Gustine and Joy Erlenbach of the U.S. Fish and Wildlife Service; and Matthew Rogers of the National Marine Fisheries Service.