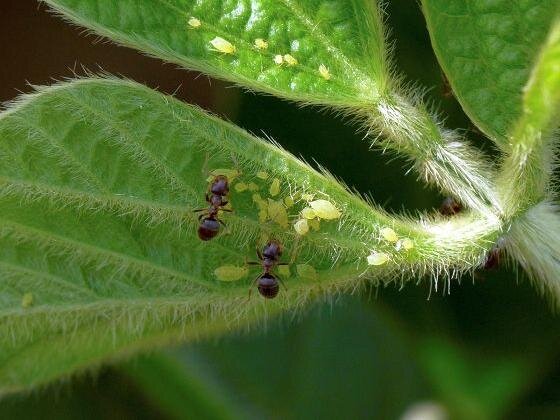 Neonicotinoids and other systemic insecticides can contaminate honeydew, which is an important food source for beneficial insects in agroecosystems, according to an international team of researchers.

John Tooker, professor of entomology in Penn State’s College of Agricultural Sciences, was part of the multidisciplinary team that conducted a review of the scientific literature, concluding that systemic insecticides in honeydew are a serious concern, particularly in large-acreage crops that commonly are treated with these products.

Honeydew is the excretion product of sap-sucking insects such as aphids, mealybugs, whiteflies and psyllids, Tooker explained.

“This rich carbohydrate source is a common food for many beneficial insects, including pollinators, such as bees and flies, and some natural enemies of pests, such as ants, wasps and beetles,” he said. “Honeydew often is more abundant than nectar in agroecosystems.”

In their review, the researchers cited a 2019 study published in the Proceedings of the National Academy of Sciences by some of the co-authors, who found that honeydew represents a novel route of exposure to neonicotinoids, the most widely used group of systemic insecticides in the world. These insecticides often are applied in the form of seed coatings, and as a plant germinates and grows, the insecticide in its sap kills pest insects that feed on it.

As part of the 2019 study, the scientists conducted chemical analyses of honeydew excreted by insects feeding on sap from plants treated with neonicotinoids. They found clear evidence that this honeydew was contaminated and toxic to beneficial insects such as parasitic wasps and pollinating hoverflies, which died within a few days of consuming the contaminated honeydew.

The study was the subject of industry skepticism because it was conducted under laboratory conditions that may not exist in the field. Subsequently, members of the research team conducted a two-year field study—published recently in Environmental Pollution—which found that neonicotinoids from soybean plants grown from neonicotinoid-coated seeds reached honeydew excreted by soybean aphid 30–40 days after the seeds were sown.

“Continued work by our consortium, and studies published by other researchers, have revealed that the phenomenon is widespread, occurring in several species of plants and honeydew producers and with several systemic insecticides with various modes of action and modes of application,” said co-author Miguel Calvo-Agudo, of the Instituto Valenciano de Investigaciones Agrarias in Valencia, Spain. “As a result, many beneficial insect species are at risk of being exposed to neonicotinoids via contaminated honeydew.”

For example, the authors raise serious concerns about invasive sap-sucking insect species that are resistant or tolerant to systemic insecticides and infest large-acreage crops—such as corn, wheat, rice and barley—that are commonly treated with systemic insecticides. These crops represent more than 50% of the worldwide harvest area, and honeydew is the main carbohydrate source in these crops for beneficial insects.

This review study can raise awareness among integrated pest management programs and environmental protection agencies that regulate the use of systemic insecticides, the researchers noted. Among their conclusions is a recommendation that agencies restrict the use of highly water-soluble systemic insecticides that are persistent in the environment and those that have a broad-spectrum activity to avoid nontarget impacts on beneficial insects through honeydew and other avenues of exposure.

Rodents could be asymptomatic carriers of SARS-like coronaviruses, study suggests

“Our review describes how honeydew contaminated with systemic insecticides may play a role in insect declines,” Tooker said. “Honeydew is a hidden driver of direct and indirect interactions among insects that is likely to be affecting the population dynamics of herbivores, biological control agents and pollinators.”