How does a cell move? ‘Pull the plug’ on the electrical charge on the inner side of its membrane, say scientists 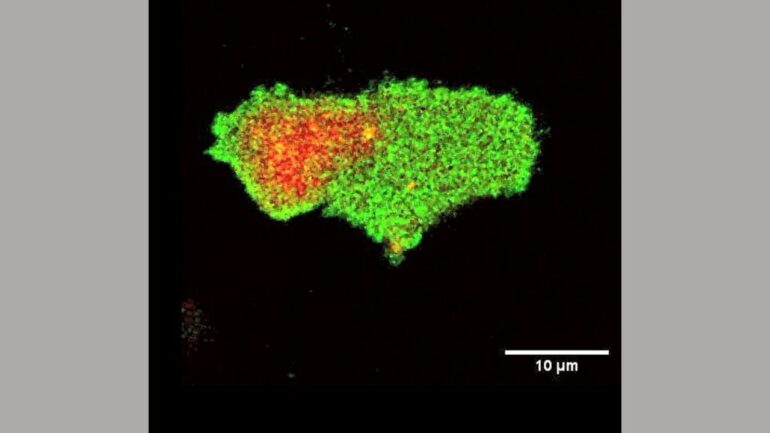 Scientists at Johns Hopkins Medicine say that a key to cellular movement is to regulate the electrical charge on the interior side of the cell membrane, potentially paving the way for understanding cancer, immune cell and other types of cell motion.

Their experiments in immune cells and amoeba show that an abundance of negative charges lining the interior surface of the membrane can activate pathways of lipids, enzymes and other proteins responsible for nudging a cell in a certain direction.

The findings, described in the October issue of Nature Cell Biology, advance biologists’ understanding of cell movement and potentially can help explain biological processes associated with movement, such as how cancer cells move and spread beyond the original site of a tumor and how immune cells migrate to areas of infection or wound healing.

“Our cells are moving within our body more than we imagine,” says Peter Devreotes, Ph.D., the Isaac Morris and Lucille Elizabeth Hay Professor and Distinguished Service Professor in the Department of Cell Biology at the Johns Hopkins University School of Medicine. “Cells move to perform many functions, including when they engulf nutrients or when they divide.”

Many of the molecules involved in cell movement become activated in the leading edge of the cell, or where it forms a kind of foot, or protrusion, that orients the cell in a particular direction.

Tatsat Banerjee, a graduate student in Cell Biology and Chemical and Biomolecular Engineering Departments at Johns Hopkins and the lead author of the study, began to notice that negatively charged lipid molecules that line the inner layer of cell membranes were not uniform, as scientists previously thought. He noticed that these set of molecules consistently leave the regions where a cell makes a protrusion.

Banerjee had a hunch that a general biophysical property, such as electrical charge, rather than a specific molecule, could be stimulating and organizing the activities of enzymes and other proteins related to cell movement.

To test this idea, Banerjee and Devreotes used a biosensor, a fluorescently-labeled, positively-charged peptide to survey the inner lining of the membrane of human immune cells, called macrophages, which engulf invading cells, and a single-celled, soil dwelling amoeba, called Dictyostelium discoideum.

They found that when and where the cells formed protrusions, there was a corresponding reduction of negative electrical charge along the inner membrane. Alternatively, along the cells’ resting membrane surface, the electrical charge increased, which contributes in recruiting more positively charged proteins.

The Johns Hopkins researchers also engineered novel highly charged, genetically encoded molecules that can be moved within the cell with light. Wherever the scientists shined a light on the cell, new protrusions would form or suppress to move the cell in a certain direction, depending on whether surface charge was decreased or increased.

Devreotes says that these experimental results are possibly the first proof that the level of generic membrane surface charge has a causal role in controlling cell signaling and motility.

Collaborating with Pablo Iglesias, Ph.D., and his research team in the Department of Electrical and Computer Engineering at the Johns Hopkins Whiting School of Engineering, the researchers built a computational model to demonstrate how small changes in electrical charges on the inner membrane affect cell signaling activities.

“The negative surface charge seems to be sufficient and necessary to activate a cascade of biomolecular reactions that have been linked to cell movement,” says Banerjee.

UK plants flowering a month earlier due to climate change

Commenting on the current study in F1000 Faculty Opinions, Martin Schwartz, Ph.D., the Robert W. Berliner Professor of Medicine (Cardiology) and Professor of Biomedical Engineering and of Cell Biology at the Yale School of Medicine, who is unrelated to this study, said, “…This paper has the potential to initiate a new direction in this field.”

Next, the scientists are planning to study precisely how and when the electrical charges are reduced along the inner membrane in response to external cues and how, exactly, the negative charges connect with the complicated protein and lipid signaling networks that prompt cell movement and other associated physiological processes.


Citation:
How does a cell move? ‘Pull the plug’ on the electrical charge on the inner side of its membrane, say scientists (2022, December 8)