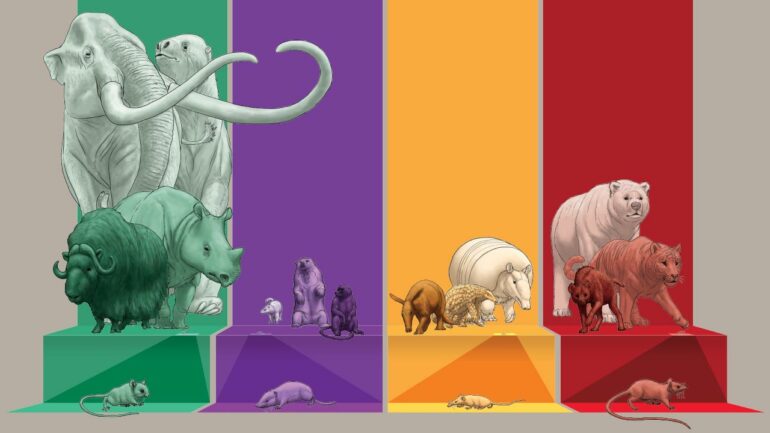 The U-shaped relationship between diet and size in modern land mammals could also stand for “universal,” says a new study, which has found that the relationship spans at least 66 million years and a range of vertebrate animal groups.

It’s been several decades since ecologists realized that graphing the diet-size relationship of terrestrial mammals yields a U-shaped curve when aligning those mammals on a plant-to-protein gradient. As illustrated by that curve, the plant-eating herbivores on the far left and meat-eating carnivores on the far right tend to reach sizes much larger than those of the all-consuming omnivores and the invertebrate-feasting invertivores in the middle.

To date, though, virtually no research had looked for the pattern beyond mammals or the modern day. In a new study, researchers from the University of Nebraska–Lincoln and institutions on four continents have concluded that the pattern actually dates back to deep time and applies to land-dwelling birds, reptiles and even saltwater fishes.

But the study also suggests that human-related extinctions of the largest herbivores and carnivores are disrupting what appears to be a fundamental feature of past and present ecosystems, with potentially unpredictable consequences.

“We’re not sure what’s going to happen, because this hasn’t happened before,” said Will Gearty, a postdoctoral researcher at Nebraska and co-author of the study, published April 21 in the journal Nature Ecology and Evolution. “But because the systems have been in what seems to be a very steady state for a very long time, it’s concerning what might happen when they leave that state.”

Size up, size down

The evolutionary and ecological histories of animal species can be told in part through the intertwined influences of diet and size, Gearty said. A species’ diet determines its energy consumption, which in turn drives growth and ultimately helps dictate its size. Yet that size can also limit the quality and quantity of food available to a species, even as it sets thresholds for the quality and quantity needed to survive.

“You can be as big as your food will allow you to be,” Gearty said. “At the same time, you’re often as big as you need to be to catch and process your food. So there’s an evolutionary interplay there.”

Because the plant-based diet of herbivores is relatively poor in nutrition, they often grow massive for the sake of covering more ground to forage more food—and accommodating long, complex digestive tracts that extract maximum nutrients from it. Carnivores, meanwhile, must grow large enough to both keep up with and take down those herbivores. Though the buffet-style menu of omnivores usually keeps their stomachs full, their high energy demands generally leave them focusing on nuts, insects and other small, energy-dense foods. And while invertivores enjoy mostly protein-rich prey, the diminutive nature of that prey, combined with stiff competition from many other invertivores, relegates them to the smallest sizes of all.

The ultimate result: a U-shaped distribution of both average and maximum body sizes in mammals. To analyze the generalizability of that pattern in the modern day, the team compiled body-size data for a huge number of surviving species: 5,033 mammals, 8,991 birds, 7,356 reptiles and 2,795 fishes.

Though the pattern was absent in marine mammals and seabirds, probably due to the unique demands of living in water, it did emerge in the other vertebrate groups—reptiles, saltwater fishes and land-based birds—examined by the team. The pattern even held across various biomes—forests vs. grasslands vs. deserts, for instance, or the tropical Atlantic Ocean vs. the temperate North Pacific—when analyzing land mammals, land birds and saltwater fishes.

“Showing that this exists across all these different groups does suggest that it is something fundamental about how vertebrates acquire energy, how they interact with one another, and how they coexist,” said co-author Kate Lyons, assistant professor of biological sciences at Nebraska. “We don’t know whether it’s necessary—there might be other ways of organizing vertebrate communities with respect to body size and diet—but it certainly is sufficient.”

But the researchers were also interested in learning how long the U-curve may have endured. So they analyzed fossil records from 5,427 mammal species, some of which date as far back as the Early Cretaceous Period of 145 million to 100 million years ago. Lyons and colleagues originally collected the fossil data as part of a 2018 study on the extinction of large mammals at the hands of humans and their recent ancestors.

“To my knowledge, this is the most extensive investigation of the evolution of body size and especially diet in mammals over time,” Gearty said.

It revealed that the U-curve stretches back at least 66 million years, when non-avian dinosaurs had just been wiped out but mammals had yet to diversify into the dominant animal class that they are today.

“It is really interesting, and really striking,” Gearty said, “to see that this relationship persists even when you have other dominant animals around.

“We suspect that it’s actually existed since the inception of mammals as a group.”

The shape of things to come

Having catalogued the present and past of the U-curve, Gearty, Lyons and their colleagues turned to its future, or potential lack thereof. The median sizes of herbivores and omnivores have plummeted roughly 100-fold since the emergence of Neanderthals and Homo sapiens over the past few hundred thousand years, the team reported, with the size of carnivores dropping by about 10 times in that same span. As a result, the U-curve that has persisted for so long has begun to noticeably flatten, Gearty said.

In that vein, the team has projected a greater than 50% chance that multiple large- and medium-sized mammals—including the tiger and Javan rhinoceros, both of which count humans as their only predators—will go extinct within the next 200 years. Those predicted extinctions would only exacerbate the disruption of the U-curve, the researchers said, especially to the extent that the loss of large herbivores could trigger or accelerate the loss of the large carnivores that prey on them.

“It’s certainly possible that as we take some of these animals off the top (of the U-curve), and as we collapse some of these ranges of body sizes, that we’re altering the way the energy is divvied up,” Gearty said. “That could perhaps have fundamental repercussions for the environment and ecosystem as a whole.”

It’s also possible, the researchers concluded, that the forthcoming decline in mammal body sizes could outpace even the unprecedented drop observed over the past few hundred thousand years.

“You keep seeing, in ecological literature, people speculating about how ecosystems are less stable now, and less resilient, and more prone to collapse,” Lyons said. “I think this is just another line of evidence suggesting that that may indeed be the case in the future.”