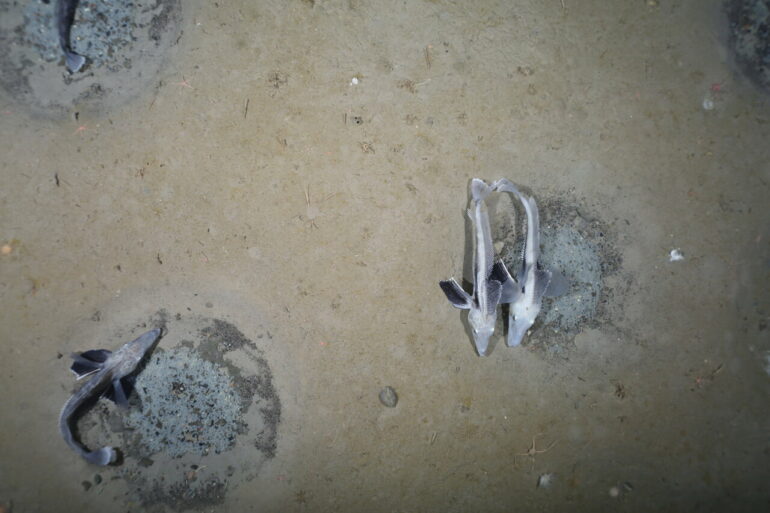 Researchers reporting in the journal Current Biology on January 13 have discovered a massive breeding colony of notothenioid icefish in Antarctica’s southern Weddell Sea. They estimate that the colony covers at least 240 square kilometers and includes about 60 million active nests. The unprecedented colony represents a fish biomass of more than 60,000 tons (or over 135 million pounds).

“Our most important finding is the pure existence of such an extensive icefish brooding colony,” says Autun Purser of the Alfred Wegener Institute in Bremerhaven, Germany. “A few dozen nests have been observed elsewhere in the Antarctic, but this find is orders of magnitude larger.”

Purser and colleagues made the discovery while surveying the Filchner ice shelf using the Ocean Floor Observation and Bathymetry System (OFOBS). “Basically this is a large, towed device, weighing one ton, which we tow behind the icebreaker RV Polarstern at a speed of one to four kilometers per hour,” he explains. “We tow this at a height of about 1.5 to 2.5 meters above the seafloor, recording videos and acoustic bathymetry data.”

The researchers were especially interested in this area of the seafloor because they knew it included an upwelling of water 2 degrees Celsius warmer than the surrounding bottom waters. The rest of what they found, however, was rather unexpected.

“We did not know to expect any sort of fish nest ecosystem,” Purser says. That part, he adds, came as a “total surprise.”

The majority of the nests they uncovered were occupied by a single adult fish guarding more than 1,700 eggs. They also observed numerous deceased fish carcasses within and near the nesting colony, suggesting that the fish play an important role in the larger food web. While more study is needed, they suspect the colony is utilized heavily by predators such as Weddell seals.

“A great many Weddell seals spend much of their time in close proximity to the fish nests,” Purser says. “We know this from historical tracking data and fresh tracking data from our cruise. The nests are exactly where the warmer water is upwelling. These facts may be coincidence, and more work is needed, but the recorded seal data show seals do indeed dive to the depths of the fish nests, so may well be dining on these fish.”

The findings reveal a globally unique ecosystem, according to the researchers. They also provide support for the establishment of a regional Marine Protected Area in the Southern Ocean under the Convention on the Conservation of Antarctic Marine Living Resources umbrella.

The researchers have now deployed two camera systems to monitor the icefish nests until a research vessel returns. The hope is that photographs taken multiple times a day will yield new insights on the workings of this newly discovered ecosystem. Purser says he has plans to return in April 2022 for surveys of the seafloor in areas of the northeast Weddell Sea.