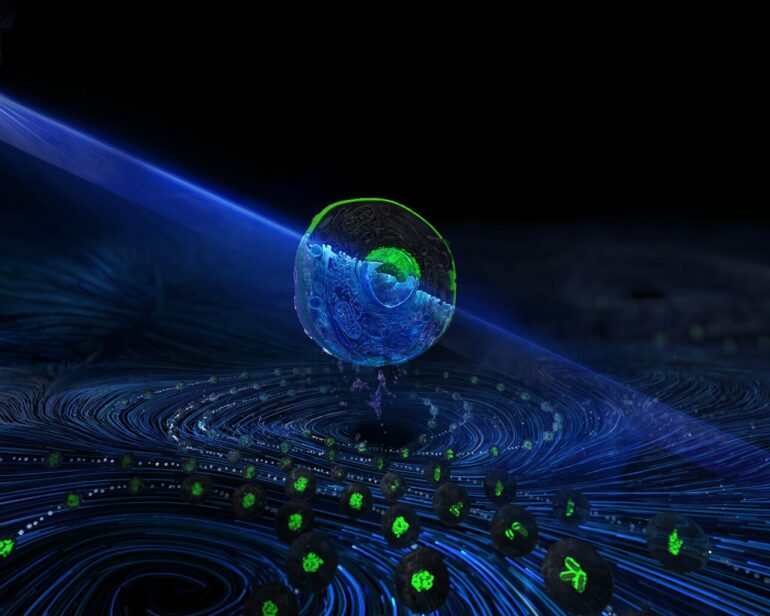 Becton, Dickinson and Company, a global medical technology company, today announced that a study conducted in collaboration with the European Molecular Biology Laboratory (EMBL) and published as the cover story of the January 21 issue of the journal Science profiles a new BD innovation in flow cytometry that adds fluorescence imaging and image-based decisioning to sort individual cells at exceptionally high speed, based on the visual details of each cell and not solely on the type or quantity of biomarkers that are present. The new technology has the potential to transform immunology, cell biology and genomics research and enable new cell-based therapeutic discovery.

Cell sorting through flow cytometry is a technique that enables scientists to identify and sort individual cells based on specific characteristics of each cell in order to study them in more detail, evaluate how each cell may react to a new drug or perform other single cell experiments. Traditionally, cell sorters operate through identification and quantification of certain biomarkers (e.g. proteins) on or within a cell. The new innovation from BD, known as BD CellView Image Technology, can capture multiple images of individual cells flowing through the system at a speed of 15,000 cells per second and also adds a previously impossible capability of sorting cells based on detailed microscopic image analysis of individual cells at this speed.

By adding imaging to the traditional biomarker identification and quantification, the new technology not only identifies if and how much of a biomarker is present in the cell, but also its location or how it is distributed within the cell. By imaging the distribution of biomarkers with this technology, researchers obtain detailed information about cells that was previously invisible in traditional flow cytometry experiments, which enables them to answer complex biological questions, such as how cells grow, function and interact, or to study exact locations of viruses or proteins within a cell, all at a highly accelerated pace.

“This innovation has overcome the typical compromise between speed and precision of sorting individual cells,” said Tom Polen, chairman, CEO and president of BD. “This breakthrough essentially equates to a researcher looking into a microscope, identifying specific characteristics of a cell of interest, and based on what they see, sorting each individual cell for further analysis—all at a rate of nearly 1 million cells every minute. The technology can analyze more than 1,000 times the amount of data compared to traditional flow cytometry methods, and sort cells at a rate of 15,000 per second based on their images. BD was the first company to commercialize flow cytometry technology in the 1970s, and this is yet another example of our storied history of innovation and technical leadership in this space.”

The new technology fills a long-standing gap in biomedical research by enabling scientists to more rapidly view and isolate cells with specific, observable traits of interest, which can accelerate discovery research and unlock potential therapies or cures for disease in a broad range of fields such as virology and oncology.

“This technology represents the culmination of more than a decade’s worth of work from a highly multidisciplinary team of optical, mechanical, electrical, biomedical and software engineers and scientists that aimed to provide researchers a differentiated and flexible capability for analyzing single cells,” said Eric Diebold, worldwide vice president of R&D for BD Biosciences and co-corresponding author of the paper. “We have just scratched the surface of the types of science that will be enabled with this new high-throughput image-based cell sorting technology, and we look forward to how BD and the scientific community at-large will leverage it to advance both basic research and the development of therapeutics.”

Details of the study

In the study published in Science, researchers used BD CellView Image Technology to study regulators of the NF-κB (nuclear factor kappa light chain enhancer of activated B cells) pathway, a protein complex that plays an important role in cellular immunity and stress response. The EMBL team measured the activity in this pathway by tracking the location of RelA, a protein that moves from the cytoplasm into the nucleus of the cell upon activation. Using BD CellView Image Technology, the screen allowed them to identify several novel regulators of this important cellular pathway in a matter of hours, instead of days as would be required using conventional approaches. This result has broad implications for accelerating the pace of genomic research and therapeutic discovery.

“For years, researchers have desired a system for cell sorting that would allow them to get a detailed picture of a cell’s inner workings and to isolate those with microscopic phenotypes of interest,” said Dr. Lars Steinmetz, senior scientist at EMBL, professor of genetics at Stanford University and co-corresponding author of the paper. “This is what BD CellView Image Technology achieves, defining a new standard in cell isolation and characterization. We are excited about applying this technology to high-resolution genomic screening aimed at collecting functional information for every part of the genome. We are also exploring applications for cell-based diagnostics and characterization of cells in health and disease.”