‘Lost’ pigeon found after more than a century 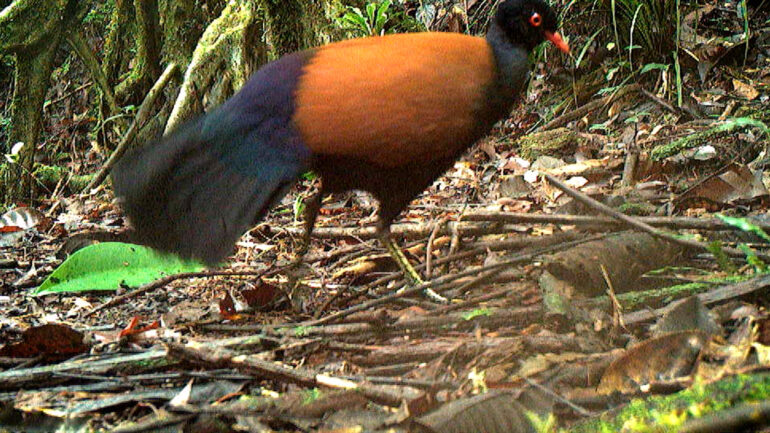 A September expedition to Papua New Guinea confirmed via video the existence of the black-naped pheasant pigeon, a critically endangered species that has not been reported for 140 years.

“For much of the trip, it seemed like we had no chance of finding this bird,” said Jordan Boersma, co-leader of the expedition and a postdoctoral researcher at the Cornell Lab of Ornithology. “We were just two days away from the end of our time on Fergusson Island in Papua New Guinea when one of our remote cameras recorded the bird walking around and fanning its tail.”

The group captured the first-ever video and still photos of the bird, a large ground-dwelling species with a rust-colored back, a black head and body, and a bobbing pheasant-like tail. It may only exist far inland on Fergusson Island in hot, extremely rugged geothermal terrain laced with twisty rivers and dense with biting insects and leeches.

“After a month of searching, seeing those first photos of the pheasant pigeon felt like finding a unicorn,” said John C. Mittermeier, director of the Search for Lost Birds project at American Bird Conservancy and a core member of the expedition team. “It’s the kind of moment you dream about your entire life as a conservationist and birdwatcher.”

Almost nothing is known of the black-naped pheasant pigeon apart from two specimens collected in 1882. There are no recordings of its sounds. The researchers think it would likely sound similar to a different pheasant pigeon species on mainland Papua New Guinea—a sound locals compare to the despairing cry of a woman ostracized by her community.

Tapping into Indigenous knowledge was key to the expedition’s success. Doka Nason, a local bird expert, joined the search and advised the team on where to look. Nason set up the camera that eventually recorded the bird. “When I saw the photos, I was incredibly excited,” he said. “I was jumping around yelling, ‘We did it!'”

“It was an experience of a lifetime working with Fergusson Islanders to find the pheasant pigeon and giving talks at schools and villages about our search was a highlight,” said Jason Gregg, a co-leader of the expedition. “Kids were whispering the local name of the bird—Auwo—and everyone was talking about it. I’m so happy we know this species survives, and it opens opportunities to learn even more about the bird and its incredible home.”

But conservationists are concerned. The principal landowner where the bird was found told the search team he’d just signed a deal with a logging company—a move that could threaten the black-naped pheasant pigeon and its habitat. The team is pursuing funding so they can go back to Fergusson and try to find out how many of the species are left.

“The reason I care, why I think we should all care, is that this bird has meant something and continues to mean something to the local people,” Boersma said. “It’s part of their legends and culture. If we lose this species, then its cultural importance will be lost along with the role it plays in this fantastic ecosystem.”