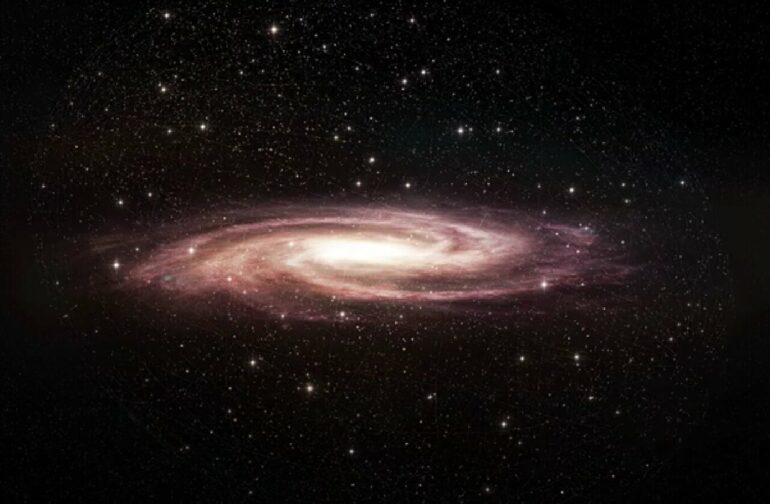 Northwestern University astrophysicist Farhad Zadeh has been fascinated and puzzled by a family of large-scale, highly organized magnetic filaments dangling in the center of the Milky Way ever since he first discovered them in the early 1980s.

With a new discovery of similar filaments located in other galaxies, Zadeh and his collaborators have, for the first time, introduced two possible explanations for the filaments’ unknown origins. In a new paper, published earlier this month in The Astrophysical Journal Letters, Zadeh and his co-authors propose the filaments might result from an interaction between large-scale wind and clouds or could arise from turbulence inside a weak magnetic field.

“We know a lot about the filaments in our own Galactic Center, and now filaments in outside galaxies are beginning to show up as a new population of extragalactic filaments,” Zadeh said. “The underlying physical mechanisms for both populations of filaments are similar despite the vastly different environments. The objects are part of the same family, but the filaments outside the Milky Way are older, distant cousins—and I mean very distant (in time and space) cousins.”

An expert in radio astronomy, Zadeh is a professor of physics and astronomy in Northwestern’s Weinberg College of Arts and Sciences and a member of the Center for Interdisciplinary Exploration and Research in Astrophysics (CIERA).

‘Something universal is happening’

The first filaments that Zadeh discovered stretched up to 150 light years long, towering near the Milky Way’s central supermassive black hole. Earlier this year, Zadeh added nearly 1,000 more filaments to his collection of observations. In that batch, the one-dimensional filaments appear in pairs and clusters, often stacked equally spaced, side by side like strings on a harp or spilling sideways like individual ripples in a waterfall.

Using observations from radio telescopes, Zadeh discovered the mystifying filaments comprise cosmic ray electrons gyrating along a magnetic field at close to the speed of light. Although he is putting together the puzzle of what the filaments are made of, Zadeh still wondered where they came from. When astronomers discovered a new population outside our own galaxy, it offered new opportunities to investigate the physical processes in the space surrounding the filaments.

The newly discovered filaments reside inside a galaxy cluster, a concentrated tangle of thousands of galaxies located one billion light-years from Earth. Some of the galaxies within the cluster are active radio galaxies, which appear to be breeding grounds for the for formation of large-scale magnetic filaments. When Zadeh saw these newly uncovered filaments for the first time, he was amazed.

“After studying filaments in our own Galactic Center for all these years, I was extremely excited to see these tremendously beautiful structures,” he said. “Because we found these filaments elsewhere in the universe, it hints that something universal is happening.”

Although the new population of filaments looks similar to those in our Milky Way, there are some key differences. The filaments outside the Milky Way, for example, are much bigger—between 100 to 10,000 times longer. They also are much older, and their magnetic fields are weaker. Most of them curiously hang—at a 90-degree angle—from a black hole’s jets into the vast nothingness of the intracluster medium, or the space wedged between the galaxies within the cluster.

But the newly discovered population has the same length-to-width ratio as the Milky Way’s filaments. And both populations appear to transport energy through the same mechanisms. Closer to the jet, the filaments’ electrons are more energetic, but they lose energy as they travel farther down the filament. Although the black hole’s jet might provide the seed particles needed to create a filament, something unknown must be accelerating these particles along astonishing lengths.

“Some of them have amazing length, up to 200 kiloparsecs,” Zadeh said. “That is about four or five times bigger than the size of our entire Milky Way. What’s remarkable is that their electrons stay together on such a long scale. If an electron traveled at the speed of light along the filament’s length, it would take it 700,000 years. And they don’t travel at the speed of light.”

In the new paper, Zadeh and his collaborators hypothesize that the filaments’ origins could be a simple interaction between galactic wind and an obstacle, such as a cloud. As the wind wraps around the obstacle, it creates a comet-like tail behind it.

“Wind comes from the motion of the galaxy itself as it rotates,” Zadeh explained. “It’s like when you stick your hand out of a window from a moving car. There’s no wind outside, but you feel the air moving. When the galaxy moves, it creates wind that could be pushing through places where the cosmic ray particles are fairly loose. It sweeps the material and creates a filamentary structure. “

Simulations, however, offer another viable possibility. When researchers simulated an active, turbulent medium, long, filamentary structures materialized. As radio galaxies move around, Zadeh explained, gravity can affect the medium and stir it. The medium then forms spots of swirling eddies. After the weak magnetic field wraps around these eddies, it can get stretched, folded and amplified—eventually becoming elongated filaments with strong magnetic field.

Although many questions remain, Zadeh still marvels at the new discoveries.

“All of these filaments outside our galaxy are very old,” he said. “They are almost from a different era of our universe and yet signaling the Milky Way inhabitants that a common origin exists for the formation of the filaments. I think this is remarkable.”