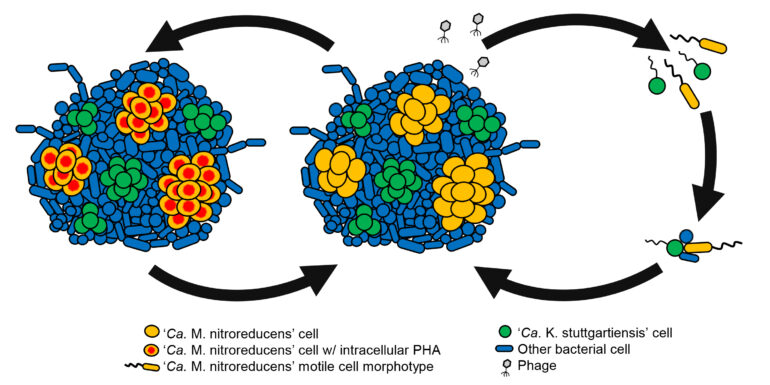 A microorganism that helps reduce the release of the greenhouse gas methane into the atmosphere has been found to be a “shape shifter” capable of markedly changing its appearance and metabolism to rapidly respond to changes in its environment, a team of microbiologists has found.

QUT scientist Dr. Simon McIlroy from the QUT Centre for Microbiome Research said the research team had identified the complex lifecycle of the microorganism, Candidatus Methanoperedens nitroreducens (Ca. M. nitroreducens) which is critical to maintaining the Earth’s climate.

“This species is globally distributed in natural environments where organic carbon is present in the absence of oxygen” Dr. McIlroy said.

“These microorganisms feed on methane that is produced in the environment dramatically reducing its release into Earth’s atmosphere.”

“As a greenhouse gas methane is second only to carbon dioxide in contributing to climate change, making these organisms vital for maintaining Earth’s climate.”

Dr. McIlroy said the team’s previous research had found that this microorganism is remarkably able to adapt to its environment by essentially ‘stealing’ genes from other species to enable it to use different nutrients.

“We found in the current study that all the observed Ca. M. nitroreducens cell types were genomically identical, despite having different shapes and gene expression profiles associated with carbon metabolism, movement, and cell division,” he said.

“As the species cannot be grown in isolation in a laboratory, this research applied innovative approaches for its study.”

Dr. McIlroy said this study was the first to demonstrate distinct life stages for a member of the Archaea within a complex microbial community.

Seeing the unseen: Birth and death of tree roots under a future atmosphere

“These findings have general implications for our understanding of how microorganisms adapt to changes in their environment,” he said.