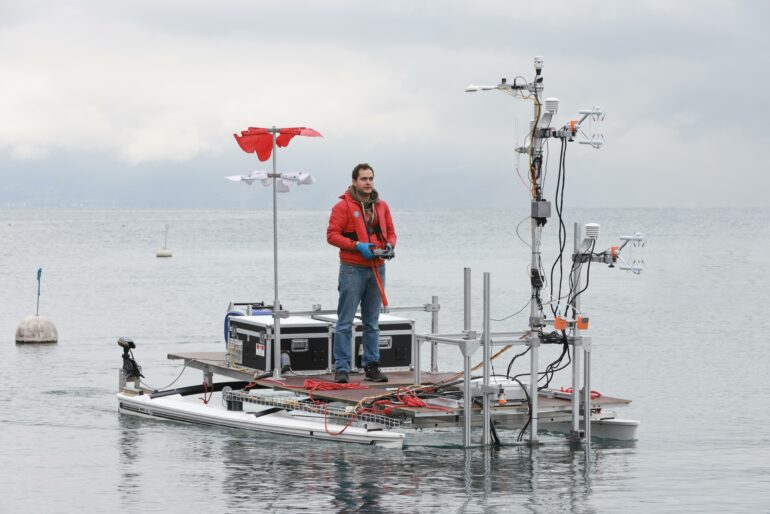 An EPFL researcher has, for the first time, documented slicks—those visually arresting, moving patches of smooth water—and explained what is happening beneath the surface.

Natural slicks are a mysterious, intriguing phenomenon for anyone who enjoys looking out over Lake Geneva, including passers-by, commuters—and now local researchers. “If you search for information about them online, you won’t find anything much,” says Andrew Barry, head of the Ecological Engineering Laboratory (ECOL) at EPFL’s School of Architecture, Civil and Environmental Engineering (ENAC).

Mehrshad Foroughan, a Ph.D. student at ECOL, was curious to learn more about natural slicks and ended up devoting his thesis to the topic. Some of his findings were recently published in Geophysical Research Letters and represent the first documented study of what slicks can reveal about lake hydrodynamics.

Swiss painter Ferdinand Hodler skillfully captured the delicate way light plays off the lake’s smooth surfaces as well as their hallmark texture. “Natural slicks and the materials constituting them play an important role in the transfer of energy between the water and the air, and thus the energy content of the lake,” says Foroughan.

He and his colleagues at ECOL are studying physical processes in the lake, from deep layers up to the surface, with a focus on the mechanisms of energy and material transport at different scales and their biogeochemical impacts. Indeed, Lake Geneva is an ideal outdoor laboratory for investigating the many phenomena that affect large water bodies.

Lake Geneva is 309 meters deep and is home to gyres and eddies—basin-scale features initiated by wind events and influenced by the Earth’s rotation. Strong wind episodes can also trigger a phenomenon known as coastal upwelling: the movement of cold water from deeper layers up to the water surface along some lake shores. The combined effects of these processes exert a major influence on lake hydrodynamics that can be visualized in natural slicks. Therefore, as part of his Ph.D., Foroughan decided to investigate whether these slicks could provide information on surface water flows.

Foroughan used an array of measuring instruments to collect data backed by detailed hydrodynamic modeling. In addition to analyzing air and water speeds and temperatures, he also took water samples and analyzed images of the lake taken from different angles.

The images were captured with cameras installed at stations in Lavaux and near the discharge of the Rhone river, which provided broad views, and with cameras placed on an unmanned, GPS-guided catamaran to record images at the water surface. The ECOL team collected all the data in real time from a second boat, which also deployed a 400m-high helium balloon equipped with yet another camera.

Under light winds, casual observers of the lake can notice that certain areas of the water surface become rough while others remain smooth. The rough areas are caused by surface waves generated by the wind, while the smooth areas, resembling oil spills, can withstand this wave generation. By analyzing the surface water composition in these two types of areas, Foroughan identified why they behave so differently: smooth areas have a higher concentration of biosurfactants, or surface agents either produced by the biological activity of phytoplankton or originating from terrestrial sources.

Between 2 pm and 4:30 pm on 30 September 2020, the Lavaux camera overlooking Lake Geneva filmed the formation of a stationary frontal slick some 10 km long, extending from the north shore of the lake towards the southern side. When viewed in fast motion, this intriguing video shows how several rapidly moving small slicks gradually come together and feed into the main one.

“This large slick formation is generally expected when strong winds are followed by a light breeze, mostly during warmer seasons,” says Foroughan. “But we were also lucky to be at the right place, with the right equipment, at the right time.”

Strong wind events had been occurring for several days before the frontal slick formed. On the day of observation, a cold-water current transported by wind from the northwest came up against warm water in a large gyre in the eastern part of the lake. The cold water, which carried rapidly moving small slicks, sank below the warmer water leaving behind biosurfactants that couldn’t sink and that were progressively merged into the bigger, stationary slick.

Another tool to manage water resources

The ECOL team’s measurements proved that natural slicks can capture major hydrodynamic features in a large lake. In this case, the large slick maps the boundary between two gyres and demonstrates the complexity of surface water motion.

“Documenting the formation and evolution of natural slicks is important because they illustrate the interaction of several critical physical processes in the lake. This information can be used to manage water resources more effectively and find out where pollutants may be hiding,” says Foroughan. “Pollutants like microplastics tend to be found in higher concentrations in smooth slicks already containing large amounts of biosurfactants.”