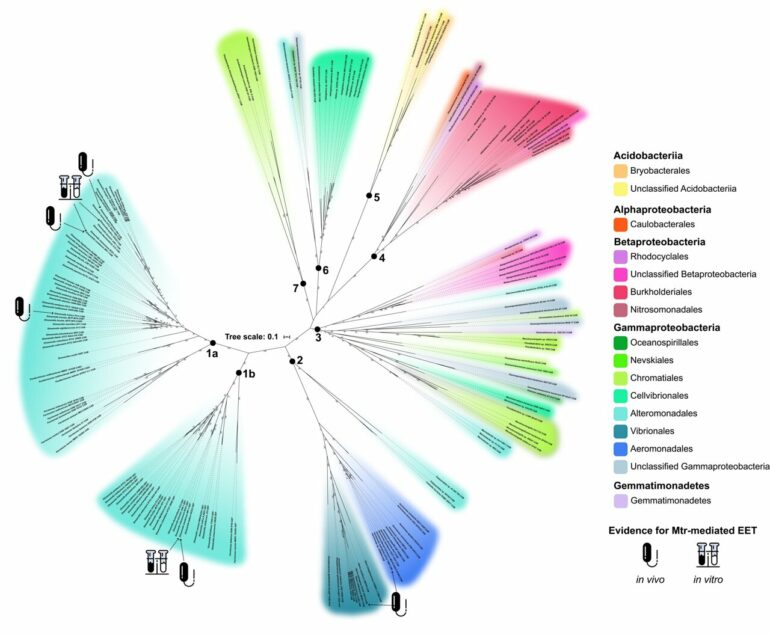 Microbes may be miniscule, but they have a massive impact on Earth and its habitability. They are uniquely different from animals, plants, and other eukaryotic organisms in that they can gain energy from “breathing” a surprisingly wide range of surfaces and materials. Microbes also drastically reshape their environment as they feast on these energy sources, making microbes major players in the cycling and availability of nutrients on Earth. One especially well-known example was the rise of oxygen on Earth due to the metabolism of photosynthetic bacteria.

In more recent years, scientists have discovered an astonishing new process by which microbes can “breathe” rocks through a process called extracellular electron transfer (EET). With EET microbes are able to “breathe” rocks and other materials that are outside their cell. In other words, microbes literally establish an electrical connection to the outside world, a connection they use to generate the power they need to grow. Researchers have since found groundbreaking uses for EET-capable microbes, such as aiding in toxic waste cleanup and as a source of alternative energy.

In a new study in mBio, researchers from Harvard and the University of Minnesota surveyed the tree of life in search of EET and discovered it is far more widespread than previously thought and is spread through horizontal gene transfer. One set of genes that makes EET possible, called mtrCAB, has been especially well-studied in the bacterium Shewanella oneidensis. Shewanella oneidensis was one of the first EET-capable organisms ever discovered. As such, it’s had a decades-long head start for the science community to interrogate it in the lab.

“A lot of our understanding of mtrCAB comes from studies in this particular organism,” said co-lead author Isabel R. Baker, Ph.D. candidate in the Department of Organismic and Evolutionary Biology at Harvard. “But we don’t really know how widespread this type of metabolism is amongst all of life’s branches. Understanding how widespread it is will help us pinpoint where this kind of metabolism is at play in global biogeochemical cycles.”

Baker and co-senior author Professor Peter R. Girgus, also in the Department of Organismic and Evolutionary Biology at Harvard, were keen on partnering with University of Minnesota researchers co-senior author Professor Jeffrey A. Gralnick and co-lead author Bridget E. Conley. Gralnick and Conley are leading experts in EET research in Shewanella. Their previous work found that mtrCAB enables EET in at least two other species beyond Shewanella.

In combining their expertise and a global database, the researchers found that these genes existed in far more organisms than previously assumed and in a wide variety of environments all over the world.

“We found these genes in microbes all over the planet from virtually every kind of environment, including the deep sea, salt flats, oil refinery sites, the human gut, and even wastewater contaminated by the Manhattan project,” Baker said. Further analysis revealed that the set of genes were horizontally transferred extensively throughout the history of life.

“The acquisition of genes is analogous to installing an app on your phone to give it a new functionality. Horizontal gene transfer is often associated with antibiotic resistance, but here we see a metabolic capability, EET, moving in and out of bacterial genomes,” Gralnick said.

The researchers hypothesized that whenever the genes landed in different species, the genes involved in EET would change over time to better suit the new organism’s physiology and the environment it lived in.

“It’s sort of a foregone conclusion that microbes really shape our planet and EET had always been viewed as a niche ability,” Girguis said. “But we looked at all of the genomic information from animals, Archaea, and bacteria, and all other forms of life and found it’s far more widespread than previously assumed. All of the organisms we identified are capable of plugging directly into the substrates in their environment and changing what’s available there.”

“The availability of these different substrates change over time as the Earth continues to evolve, either naturally or from human impact,” Baker said. “Understanding how these proteins may have coevolved with the history of oxygen on earth is very important. It could help us understand if this metabolism, or a metabolism like this, helped play a role in one of the massive transformations of our planet’s surface that gave rise to the modern world as we know it.”