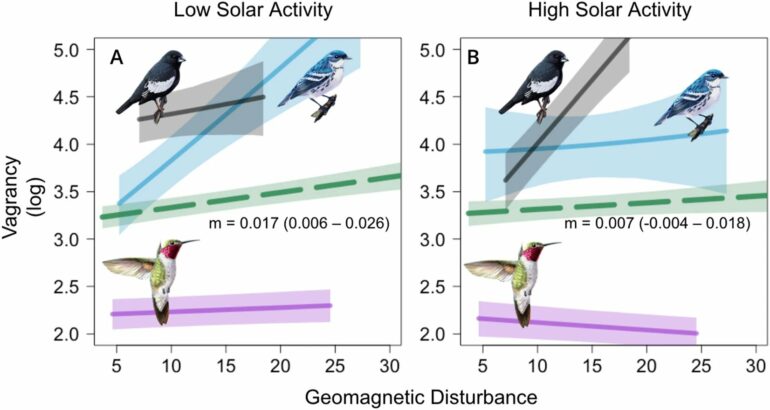 It seems logical enough that bad weather can sometimes cause birds to become disoriented during their annual fall migrations—causing them to wind up in territory they’re unaccustomed to. But why, even when weather is not a major factor, do birds travel far away from their usual routes?

With North America’s bird populations steadily declining, assessing the causes of vagrancy could help scientists better understand the threats birds face and the ways they adapt to those threats. For example, birds that wind up in unfamiliar territory are likely to face challenges finding food and habitats that suit them, and may die as a result. But it also could be beneficial for birds whose traditional homes are becoming uninhabitable due to climate change, by “accidentally” introducing the animals into geographic regions that are now better suited for them.

Earth’s magnetic field, which runs between the North and South Poles, is generated by several factors, both above and below the planet’s surface. Decades’ worth of lab research suggests that birds can sense magnetic fields using magnetoreceptors in their eyes. The new UCLA study lends support to those findings from an ecological perspective.

“There’s increasing evidence that birds can actually see geomagnetic fields,” said Morgan Tingley, the paper’s corresponding author and a UCLA associate professor of ecology and evolutionary biology. “In familiar areas, birds may navigate by geography, but in some situations it’s easier to use geomagnetism.”

But birds’ ability to navigate using geomagnetic fields can be impaired when those magnetic fields are disturbed. Such disturbances can come from the sun’s magnetic field, for example, particularly during periods of heightened solar activity, such as sunspots and solar flares, but also from other sources.

“If the geomagnetic field experiences disturbance, it’s like using a distorted map that sends the birds off course,” Tingley said.

Lead researcher Benjamin Tonelli, a UCLA doctoral student, worked with Tingley and postdoctoral researcher Casey Youngflesh to compare data from 2.2 million birds, representing 152 species, that had been captured and released between 1960 and 2019—part of a United States Geological Survey tracking program—against historic records of geomagnetic disturbances and solar activity.

While other factors such as weather likely play bigger roles in causing vagrancy, the researchers found a strong correlation between birds that were captured far outside of their expected range and the geomagnetic disturbances that occurred during both fall and spring migrations. But the relationship was particularly pronounced during the fall migration, the authors noted.

Geomagnetic disturbances affected the navigation of both young birds and their elders, suggesting that birds rely similarly on geomagnetism regardless of their level of migration experience.

The researchers had expected that geomagnetic disturbances associated with heightened solar activity would be associated with the most vagrancy. To their surprise, solar activity actually reduced the incidence of vagrancy. One possible reason is that radiofrequency activity generated by the solar disturbances could make birds’ magnetoreceptors unusable, leaving birds to navigate by other cues instead.

“We think the combination of high solar activity and geomagnetic disturbance leads to either a pause in migration or a switch to other cues during fall migration,” Tonelli said. “Interestingly, birds that migrate during the day were generally exceptions to this rule—they were more affected by solar activity.”

Although the researchers only studied birds, their methods and findings could help scientists understand why other migratory species, including whales, become disoriented or stranded far from their usual territory.

“This research was actually inspired by whale strandings, and we hope our work will help other scientists who study animal navigation,” Tingley said.

To make the research more accessible to the birdwatching public, Tonelli developed a web-based tool that tracks geomagnetic conditions and predicts vagrancy in real time. The tracker is offline during the winter, but it will go live again in the spring, when migration begins again.