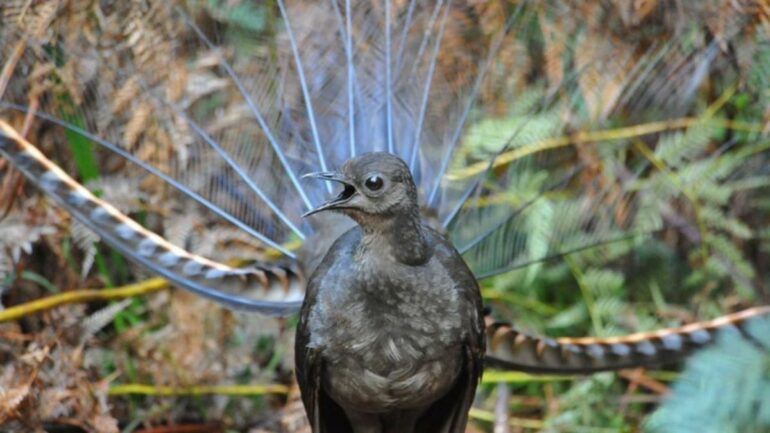 New research led by Western Sydney University has found that male lyrebirds ‘compose’ long complex songs created out of mimicked sounds ‘sampled’ from their environment, and share these songs with their neighbors.

The study published in Proceedings of the Royal Society B: Biological Sciences investigated the organization, transmission, and function of sequences of vocal mimicry sung by male Albert’s lyrebirds in Bundjalung Country, Eastern Australia.

Lead researcher Ph.D. student Fiona Backhouse from Western Sydney University explained that a bit like in the hip-hop genre, lyrebirds were found to sample sounds produced by other birds from their environments and compose new songs by assembling these mimicked sounds into highly particular sequences.

According to Backhouse, many bird species organize their songs into sequences, yet little is known about the drivers of that sequence structure including with lyrebird mimicry.

“Through our study, we’ve established that each population has a characteristic song sequence, where individual males sing the same song sequence many times during the breeding season with only minor variations, and his neighbors will sing a very similar song sequence, but there are differences among populations,” said Backhouse.

“Our study provides strong evidence that individuals copy the sequences from individuals nearby—their neighbors—whom themselves copy the sequences from others. This then provides the ingredients for a ‘game of telephone,’ whereby changes in sequence structure evolve throughout the species’ range. This process is similar to how geographical differences arise in human communication.”

Across the entire species range, songs were sung with immediate variety and a high acoustic contrast, suggesting that sequence structure is a means to enhance perceptions of the male lyrebirds’ repertoire.

“Lyrebirds appear to compose their song sequences to maximize drama: they order the individual mimetic samples so that consecutive samples are as dramatically different as possible. This seems like an excellent way to give the listener the best and quickest impression of the virtuosity of the male’s mimicry.”

The research team, which included collaborators from Cornell University, the University of Wollongong and the Australian National University, said the results provide evidence that higher order sequences of mimicry can be socially transmitted, and that the order of vocal units can be functionally significant.

“Previously, lyrebirds and other vocal mimics were viewed as ‘passive’ mimics—like a recorder merely reproducing what they heard. This research shows that lyrebirds do in fact use their mimicry to ‘compose’ long, complex songs, all in an effort to appeal to their female listeners.”