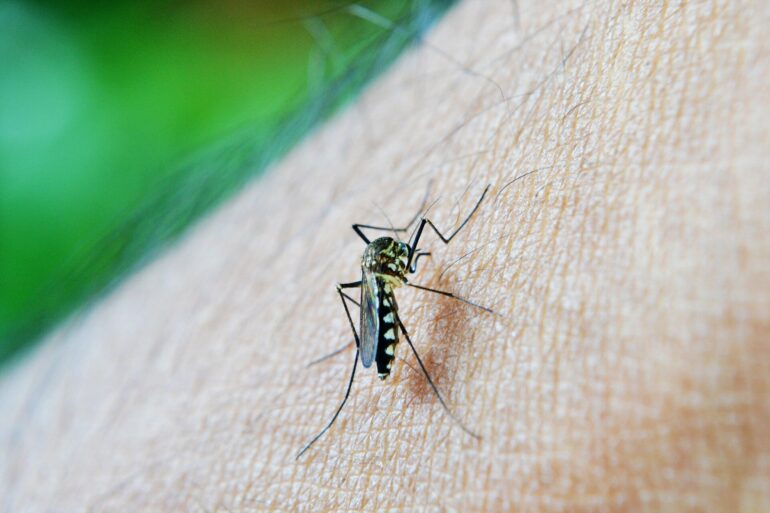 Male mosquitoes beat their wings faster when swarming at sunset to better detect females and increase their chance of reproducing, finds a novel study led by UCL scientists.

Researchers say that understanding the intricacies of the mosquitoes’ mating game could help curb the spread of diseases such as malaria, dengue fever and the Zika virus.

Lead author Professor Joerg Albert (UCL Ear Institute) said: “Mosquitoes are exquisitely auditory animals; without their sense of hearing they could not reproduce.

“Within busy swarms males need to locate females during mid-flight by detecting the females’ faint flight tones. But given that these flight tones are nearly inaudible for the males, how does their hearing work?

“Understanding this fascinating mating system could help limit the numbers of offspring, which is of crucial importance in the fight against mosquito borne diseases.”

For the study, researchers at UCL Ear Institute recorded the flight tones (=wing beats) of free-flying malaria mosquitoes Anopheles gambiae, in swarms of 100 males or 100 females in special incubators with highly sensitive microphones.

The microphones registered each flyby event of a mosquito and allowed researchers to extract the frequency of their wingbeats across several days and daytimes.

Researchers found that these wing beats changed across the day, even in individually kept mosquitoes, but only in males not in females.

Explaining the findings Professor Albert said: “At dusk, when males are swarming and listening out for females entering the swarm, males beat their wings faster. This increase in wing beat frequency changes the frequency of ‘distortion tones’ which are produced inside the male ears when their own flight tones mix with the flight tones of an arriving female.

“The distortion tones produced during dusk—in the mating swarms—are more audible to the male ear than those created at other times of the day. So, by changing their wing beat in the swarm they make females more audible and increase their chances to detect one.”

Researchers say the change in wing beat is partly a result of their circadian clock; increasing wing beat frequency is likely very costly for the males (aerodynamically), so they restrict this increase to the time of swarming.

Importance of discovery and next steps

Mosquito flight tones and their role in mosquito biology have been the subject of dozens of investigations and speculations for more than a century.

This study is an important step forward in understanding how mosquitoes use acoustics to influence reproduction, but other as yet unidentified variables are also at play, so more research is required.

“By the year 2050, due to ongoing climate changes, almost half the globe will be threatened by—partly debilitating—mosquito borne diseases,” said Professor Albert.

“In order to monitor and control mosquito populations, a quantitative understanding of acoustic mating in mosquitoes is needed. This will also help optimize genetic interventions, such as the release of genetically modified mosquitoes, designed to collapse local mosquito populations. Our findings provide the platform for this endeavor, by identifying the key determinants (and variables) of mosquito flight tone-based hearing.”