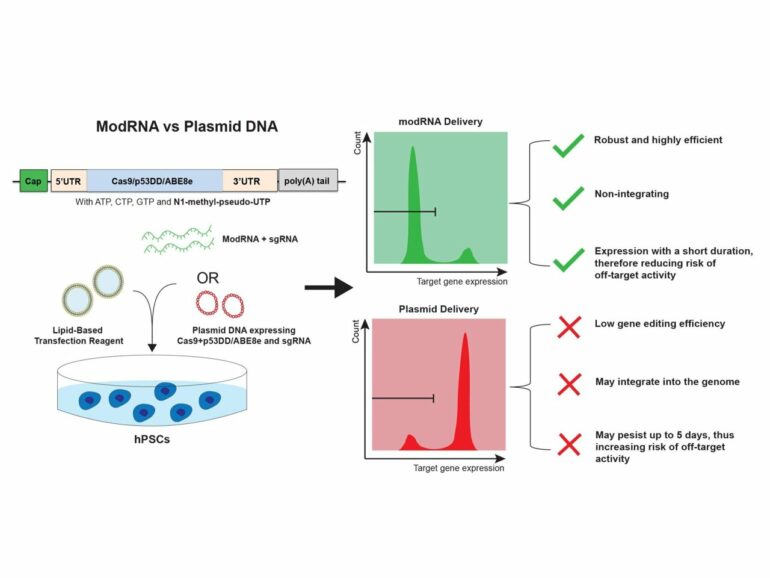 A Penn State-led team of interdisciplinary researchers has developed techniques to improve the efficiency of CRISPR-Cas9, the genome editing technique that earned the Nobel Prize in 2020. While CRISPR-Cas9 is faster, less expensive and more accurate than other gene-editing methods, according to project leader Xiaojun “Lance” Lian, associate professor of biomedical engineering and biology at Penn State, the technology has limitations—especially in applications to improve human health.

“The human genome is enormous, and CRISPR-Cas9 makes it possible for scientists to find and target a mutated gene for the purpose of studying it,” Lian said.

CRISPR uses a disc of genetic material, known as plasmid DNA, to deliver guided ribonucleic acid (RNA) that positions the Cas9 enzyme at the precise location of the target gene. When the DNA is located, Cas9 binds to it and cuts it out, allowing other DNA to repair the cut. Researchers can then see how the removal changes the gene’s expression. But there are delivery and editing efficiency problems with current DNA-based CRISPR methods, according to Lian.

“Delivery of DNA CRISPR effectors is low,” he said. “Only 20% to 30% of the targeted cells will receive gene-editing DNA when using CRISPR. Delivery of RNA into cells can be more efficient; however, when regular RNA is introduced, cells can see it as a virus. They destroy the RNA before it can make proteins—say, in a matter of a few hours—and, in doing so, destroy the gene editing attempt.”

To improve the outcome, the researchers changed the way the genome editing tools are delivered to the stem cells, using modified RNA (modRNA). The modRNA differs from plasmid DNA in that it replaces one of the base substrates found in RNA with a chemically modified version, and it is stabilized by stronger structural support.

“The modRNA was found to be notably more efficient than plasmid DNA,” Lian said. “Around 90% of the cells received the modRNA from a simple transfection, so it was able to remain in place and do its job.”

The researchers also found that the amount of time the modRNA was in place was ideal: long enough to modify the cells but not so long that it caused off-target activity. But modRNA introduced another issue, according to Lian.

When modRNA Cas9 is successfully delivered to the target gene, it creates a double-stranded break in the genome, which some cells will try to fix. The ones that fix themselves can pass the repair, or “mutation,” to their progeny. This is the process researchers want to better understand, so these are the cells they want to harvest and study. The issue, Lian said, is that most cells with this break identify it as a major problem with the genome and will self-destruct instead of trying to repair themselves.

To reduce the toxic side effects of Cas9 and help edited cells survive, Lian’s team introduced a small protein known to help cells grow. According to Lian, this added protein inhibited cell death and improved Cas9 editing efficiency up to 84%.

The researchers also found that the modRNA could improve other gene editing techniques, such as base editing. Base editing can knock out genes or correct mutations in the genome by using a protein to change a single nucleotide instead of cutting both strands, like CRISPR does.

“We transfected stem cells with either a plasmid-based or a modRNA-based base editing protein,” Lian said. “Our modRNA-based method was more than four times more efficient, at 68%, than the plasmid-based technique, at about 16%, in editing the genome successfully.”

According to Lian, as more gene-editing labs improve gene editing efficiency and effectiveness, researchers will be able to better understand genes and their functions more quickly.

“The human body has more than 20,000 genes, yet we study the functions of only about 10% of them,” Lian said. “Examining the purpose of every remaining gene, one at a time, could take a lifetime. Using engineered stem cells from our highly efficient gene-editing techniques can greatly speed up this process.”