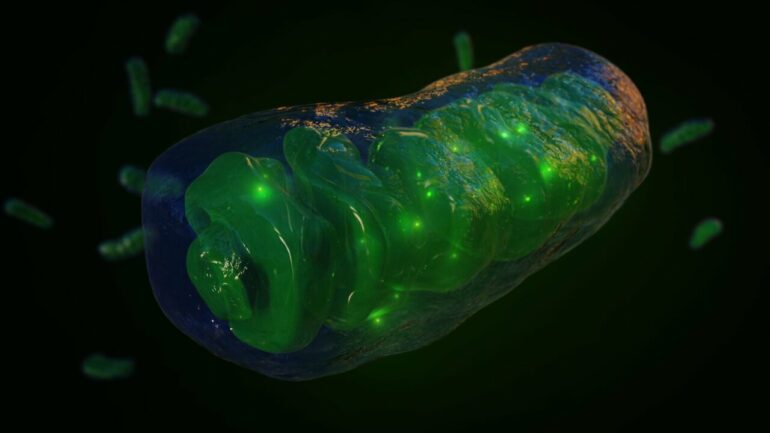 In the beginning, there was boredom. Following the emergence of cellular life on earth, some 3.5 billion years ago, simple cells lacking a nucleus and other detailed internal structure dominated the planet. Matters would remain largely unchanged in terms of evolutionary development in these so-called prokaryotic cells—the bacteria and archaea—for another billion and a half years.

Then, something remarkable and unprecedented took place. A new type of cell, known as a eukaryote, emerged. The eukaryotes would evolve many complex internal modules or organelles, including the endoplasmic reticulum, the Golgi apparatus and the mitochondria, forming wildly diverse cell types—precursors to all subsequent plant and animal life on earth. Prokaryotic cells, which include bacteria and archaea, are structurally simple organisms, lacking the complex internal structure found in eukaryotes. All living plant and animal species today have their origins in the Last Eukaryotic Common Ancestor or LECA. The transition from prokaryote to eukaryote has remained a central mystery biologists are still trying to untangle.

How this crucial transition came to be remains a central mystery in biology.

Their study, which appears in the current issue of the journal Nature Ecology & Evolution, challenges a popular scenario put forward to explain the arrival of the first eukaryotic organisms.

The researchers explore in detail, the energy requirements of eukaryotic cells, which are on average, larger and more complex compared with prokaryotes. Their quantitative results stand in opposition to a reigning dogma, first put forward by biologists Nick Lane and Bill Martin.

The basic idea of Lane and Martin is that a cell’s developmental fate is governed by its supply of energy. Simple prokaryotes are mostly small and consist of single cells or small colonies and can subsist on more limited stores of energy to power their activities. But once a cell achieves sufficient size and complexity, it eventually reaches a barrier, beyond which such prokaryotes can not pass. Or so the theory has it.

According to this idea, a singular event in Earth’s history gave sudden rise to the eukaryotes, which then grew and diversified to occupy every ecological niche on the planet, from undersea vents to arctic tundra. This vast diversification occurred when a free-living prokaryotic cell acquired another tiny organism within the confines of its interior.

Through a process known as endosymbiosis, the new cell resident is taken up by this proto-eukaryote, supplying it with additional energy and enabling its transformation. The endosymbiont it has acquired would eventually develop into mitochondria—cellular powerhouses found only in eukaryotic cells.

Because all complex life today can be traced to a single eukaryotic branch of the evolutionary tree, it has been assumed that this chance endosymbiotic event, the acquisition of mitochondria, occurred once and only once during the entire history of life on Earth. This accident of nature is why we’re all here. Without mitochondria, the larger volume and complexity of eukaryotes would not be energetically viable.

Not so fast, the authors of the new study claim.

Schavemaker notes that while the distinction between prokaryotes and eukaryotes among organisms living today is obvious, things were murkier during the transition phase. Eventually, all the common traits of extant eukaryotes would be acquired, yielding an organism researchers refer to as LECA or the Last Eukaryotic Common Ancestor.

The new study explores the advent of the first eukaryotes and notes that instead of a hard boundary line separating them from their prokaryotic ancestors, the true picture is messier. Rather than an unbridgeable gulf between prokaryotes and eukaryotes in terms of cell volume internal complexity and number of genes, the two cell forms enjoyed considerable overlap.

The researchers investigate a range of prokaryotic and eukaryotic cell types to determine a) how cell volume in prokaryotes can eventually act to constrain a cell’s membrane surface area required for respiration, b) how much energy a cell must direct to DNA activities based on the arrangement of its genome and c) the costs and benefits of endosymbionts for cells of various volume.

It turns out that cells can grow to considerable volume and acquire at least some of the characteristics of complex cells while remaining primarily prokaryotic in character and without the presence of mitochondria.

Mitochondria are the energy powerhouses in eukaryotic cells. One popular hypothesis claims these organelles were a pre-requisite to the transition from simpler prokaryotes like bacteria and archaea to larger, more complex eukaryotic organisms. The new study challenges this assumption. Graphic by Jason Drees

The researchers examined how the respiratory requirements of a cell, measured by the number of ATP synthase molecules available to supply ATP energy for cell growth and maintenance, scale with a cell’s volume. They also describe how energy requirements scale with cell surface area, drawing on data from Lynch and Marinov.

“We actually looked at the surface area of the cell and found that the number of ATP synthases increases faster than the cell membrane does,” Schavemaker says. “This means that at some point of increasing cell size, there will be a volume limit, where the ATP synthases cannot supply enough ATP for the cell to divide at a certain rate.” Eukaryotes overcome this barrier through additional respiratory surface area provided by internal membrane-bound structures like the mitochondria.

Intriguingly, this cell volume limit does not occur at the boundary of prokaryotes and eukaryotes, as previous theory would predict. Instead, “it happens at much larger cell volumes, around 103 cubic microns, which encompasses a lot of existing Eukaryotes. And that’s what has made us think mitochondria probably weren’t absolutely necessary. They may have helped but they weren’t essential for this transition to larger volumes,” Schavemaker says.

Something similar happens when the arrangement of genes within prokaryotes and eukaryotes is compared. The genome architecture of prokaryotes is said to be symmetrical, consisting of a circular, double-stranded length of DNA. Many bacteria harbor multiple copies of their genome per cell.

But eukaryotes have a different genome architecture, known as asymmetrical. The key advantage of the eukaryotic genome arrangement is that they don’t have to maintain genome copies all over the cell, like prokaryotes. For most genes, eukaryotes can maintain one or two copies in the nucleus; only a small number of genes are present on the many copies of the mitochondrial genome that are strewn throughout the cell.

In contrast, large bacteria have many copies of their entire genome, with each genome containing a copy of every gene, present throughout the cell. This distinction has allowed eukaryotes to grow considerably in size without facing the same energy constraints imposed on prokaryotes. But once again, the researchers observed significant overlap in the gene numbers of prokaryotes and eukaryotes, suggesting that prokaryotes can expand their gene number into the domain usually associated with larger eukaryotes, until they reach a critical threshold beyond which their genomic symmetry becomes a limiting factor.

The new picture of early eukaryote evolution provides a plausible alternative to the mitochondria-first paradigm. Rather than evolution ushering in the age of eukaryotes with one grand gesture—the chance acquisition of a mitochondrial prototype, a series of tentative, gradual, step-wise changes over vast timespans ultimately produced complex cells packed with sophisticated internal structures and capable of explosive diversification.

Earlier research by Lynch and Marinov cited in the new study takes a somewhat more radical view, implying that mitochondria offered few if any benefits to early eukaryotes. The new study stakes out a more moderate position, suggesting that beyond a critical cell volume, mitochondria and perhaps other features of modern eukaryotic cells would have been necessary to satisfy the energy needs of large cells, but a range of smaller proto-eukaryotes may have done just fine without these innovations.

Hence, the transition to the mysterious LECA event may have been preceded by a series of organisms, which may have initially been mitochondria-free.

The new research also throws into question the timing of eukaryotic transition events. Perhaps the great transition began with the development of a eukaryotic cytoskeleton or other advanced structure. The internal mitochondria with its additional cellular genome may have started when a smaller prokaryote was engulfed by a larger one, through a process known as phagocytosis or perhaps the mitochondria invaded the first prokaryote as a parasite. Much more research will be required to confidently place the series of events leading to fully-fledged eukaryotes in their proper sequence.

“We don’t know which advances came first,” Schavemaker says. “You could imagine a series of organisms that first started with endomembranes and internal vesicles. Then, they develop the ER from this, which carries out the handling of the membrane proteins, and from this you get the nucleus. And maybe then