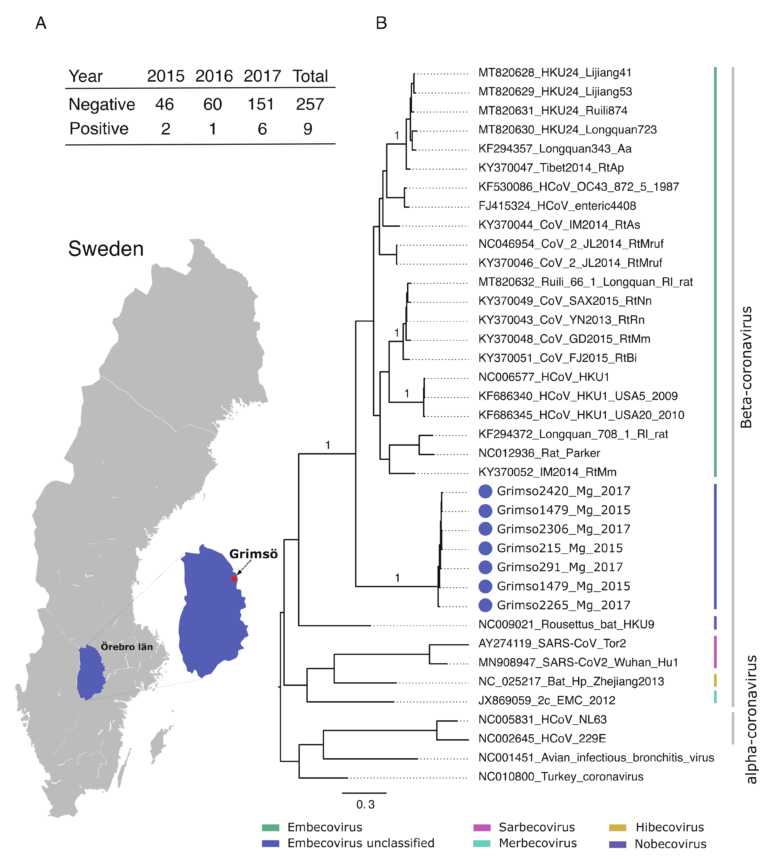 Researchers from the Zoonosis Science Center at Uppsala University have identified a new coronavirus. Their study of approximately 260 bank voles caught around Grimsö, Örebro County, shows that the virus is well established in Sweden’s red-backed voles.

“Between 2015 and 2017, we consistently found what we have called the ‘Grimsö Virus’ in 3.4 percent of these voles, which would suggest that the virus is widespread and common in Sweden’s bank voles,” says Åke Lundkvist, Professor in virology and head of the Zoonosis Science Center at Uppsala University. He led the study together with researcher Jiaxin Ling and Anishia Wasberg, a doctoral student and the first author.

Researchers from the Zoonosis Science Center, ZSC, map zoonotic viruses to increase the understanding of the interaction between viruses and host animals. Unlike the SARS-CoV and MERS coronaviruses that originate in bats, seasonal coronaviruses, such as HCoV-OC43 and HCoV-HKU1, appear to have spread to humans from rodents like rats, mice and voles. The objective is to increase knowledge and develop methods that can effectively limit major virus outbreaks and avoid infection spreading from animals to humans.

In a new study published in the journal Viruses, researchers from ZSC examined red-backed voles caught around Grimsö in Örebro County between 2015 and 2017 and tested them for coronavirus. Using an RNA sequencing method, they identified a new coronavirus known as the ‘Grimsö Virus’ belonging to the betacoronavirus family that also includes SARS-CoV, MERS and SARS-CoV-2.

Rodents already carry several zoonotic microorganisms, such as Hantaviruses and Tularemia, meaning they play a key role in how infectious diseases are spread. In recent years, there has been a dramatic increase in infectious diseases that can be linked to small mammals, like rodents, and research around the ecology of these host animals is an essential component in the work to prevent future outbreaks.

The bank vole (Myodes glareolus) is one of Europe’s most common rodents. Previous studies have found several coronaviruses circulating amongst animals in countries like the United Kingdom, Poland, France and Germany.

“We still do not know what potential threats the Grimsö Virus may pose to public health. However, based on our observations and previous coronaviruses identified among bank voles voles, there is good reason to continue monitoring the coronavirus amongst wild rodents,” says Professor Åke Lundkvist.