No photosynthetic improvement in ictB transformants in field-grown model crop 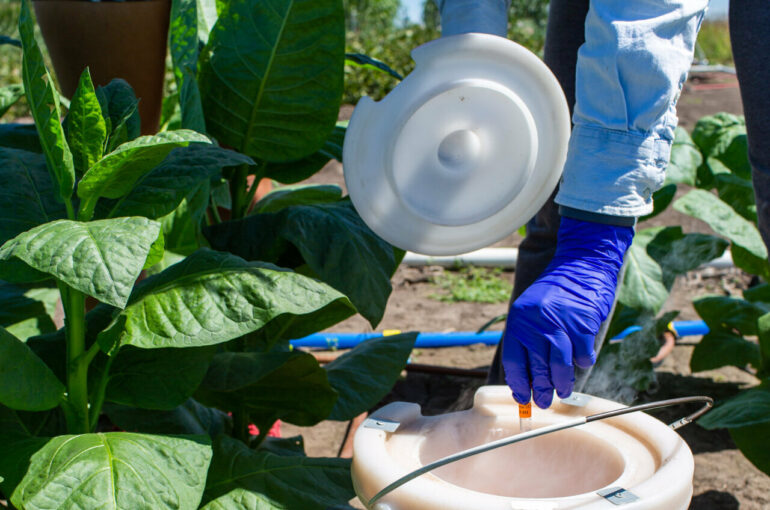 It is projected that by the year 2050, the global food supply will need to increase by 50-80% to keep up with the growing population. Researchers all over the world have been working to find ways to sustainably grow food crops to meet this need, and improving photosynthesis in plants holds great possibilities to solving these issues.

In a recent study, published in the Journal of Experimental Botany, a team of Illinois researchers tested the potential for increased plant productivity and intrinsic water-use efficiency through the overexpression of inorganic carbon transporter B (ictB) in field-grown tobacco. However, their results showed no significant difference between the field-grown ictB expressing tobacco lines and wild-type.

“Our results indicated that ictB overexpression may only benefit crops grown in controlled environments, such as greenhouses,” said Ursula Ruiz-Vera, a former postdoctoral researcher at the University of Illinois Urbana-Champaign, who led this study for a research project called Realizing Increased Photosynthetic Efficiency (RIPE). “If the benefits of the ictB overexpression can only be seen in plants grown in controlled environments, it is worth a deeper exploration of this method under these conditions which can benefit crops that use environments like greenhouses, like vegetable crops. However, this method may not be the most efficient way to increase food production under field conditions.” Ruiz-Vera now works as a Senior Scientist, Control Environment Plant Physiologist at Bayer Crop Science.

RIPE, which is led by Illinois, is engineering crops to be more productive by improving photosynthesis. RIPE is supported by the Bill & Melinda Gates Foundation, the Foundation for Food & Agriculture Research, and the U.K. Foreign, Commonwealth & Development Office.

Plants fall under two main types of photosynthesis, C3 and C4. The difference between these two is that C4 plants operate a carbon concentration mechanism (CCM), which increases the CO2 concentration around the enzyme Rubisco. Because of this CCM, C4 plants tend to have greater water- and nitrogen-use efficiency.

However, most major food crops consumed by humans utilize the less efficient C3 photosynthetic pathway, prompting initiatives to improve C3 crops. Several studies over the years have suggested that overexpressing the ictB gene would improve photosynthetic efficiency in C3 plants.

Much of RIPE’s testing of improvements to photosynthesis has been done using tobacco plants, as they are a convenient proof-of-concept crop. Since tobacco is easy to genetically transform, due to its ability to produce a large amount of seed that would shorten testing cycles, this makes it easier to transfer the successful genetic traits to be mirrored in food crops such as cowpea, cassava, and soybean.

“Most of the previous studies have been performed in controlled conditions and it isn’t clear if these improvements in plant productivity could be translated to crops in the field,” said Liana Acevedo-Siaca, who co-led this study at Illinois during her time as a postdoctoral researcher. “In this experiment, we wanted to grow ictB tobacco plants in the field to evaluate if these transgenic plants have a higher photosynthetic efficiency than wild-type under field conditions.”

Overall, their findings suggested that the transformants did not perform better than wild-type on photosynthesis, biomass, and leaf composition related traits, in contrast to previous studies that suggested otherwise. However, there remains optimism that ictB still holds value in contributing to the improvement of crop yields, as results from previous studies had shown significant gains for biomass production with ictB overexpression.

More research should be conducted to fully understand the function of the gene and in which environmental conditions it offers the greatest benefit to crop performance, helping to meet the increased global demands for food.

Farm vehicles are now heavier than most dinosaurs: Why that’s a problem

“Although previous results showed benefits in greenhouses and controlled environments for ictB transformants, there is a bright side as well,” said Acevedo-Siaca, who now works as an Associate Scientist in the Global Wheat Program at the International Maize and Wheat Improvement Center (CIMMYT) in Mexico. “As we look to increase food production sustainably, agriculture in greenhouses and vertical farming may benefit from ictB overexpression.”


Citation:
No photosynthetic improvement in ictB transformants in field-grown model crop (2022, May 27)