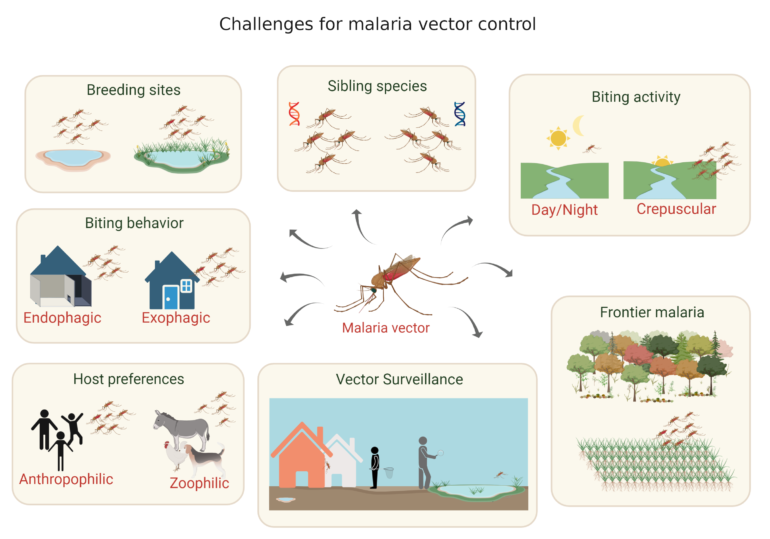 Researchers in the College of Agriculture and Life Sciences at Virginia Tech have found unique interactions in the cells of five mosquito species that could be a roadmap to removing the ability to transmit malaria and other diseases in the future. The findings were recently published in Nature Communications.

People often use insecticides to spray as much as possible to kill mosquitos. But this form of control doesn’t discriminate between good and bad insects and also builds resistance among mosquitos and insects that survive through natural selection and mutations.

After years of relative success controlling mosquito populations in this manner, it is now being reevaluated due to a significantly decreasing effectiveness and not being ecologically friendly.

“We have to constantly invent new insecticides,” said Igor Sharakhov, one of the researchers on the project, a professor of entomology and an affiliated faculty with the Fralin Life Sciences Institute. “With genomic approaches showing more promise, we can generate so-called gene drives and create a construct that could either suppress the mosquito population or render it incapable of transmitting disease.”

But for the practical applications to work, scientists need to have an understanding of how the genome—the complete set of genes in a cell—is organized. To get a good picture of this, Varvara Lukyanchikova, the lead researcher of the international team and a visiting scholar in the Department of Entomology, and the other members of the project studied five species of mosquitos with more than 100 million years of evolution between them—about the same as the evolutionary time between a mouse and a human.

The researchers wanted to check the genome organization in malarial mosquitos using a method not previously applied to these insects to see if there are any unique features at the cellular level.

“What we also discovered is that while the mosquito genome is organized similarly to other genomes, it has active and inactive compartments. Now we can see exactly which part of the genome is functioning, expresses genes, and which does not,” said Lukyanchikova, who also works at Sharakhov Lab and is affiliated with the Fralin Life Sciences Institute. “This can help with how we use gene-drives systems in particular and is one way we can use the knowledge we gained from this research.”

The research team established a technique for mosquito embryos using Hi-C, developed about a decade ago, that studies the three-dimensional architecture of genomes and helps researchers see which regions within a genome can contact each other.

While the idea is quite simple, the execution is a bit more complex. The researchers took the nuclei and used paraformaldehyde to keep proteins and DNA interactions within their space while being strongly linked together. Using a restriction, the researchers then cut the DNA and used ligase, an enzyme, to link the DNA molecules in their nuclear space.

Using this technique, the researchers extracted nuclei from cells of five mosquito species, Cellia (An. coluzzii, An. merus, An. stephensi), Anopheles (An. atroparvus), and Nyssorhynchus (An. Albimanus). After sequencing the libraries and merging biological replicas, the researchers obtained 60 million to 194 million unique alignable reads for each species of mosquito.

Based on this probability, a heat map can be created that shows how often these two loci contact each other. This is a strong molecular method that helps unearth genome interactions.

Then, the researchers created heat maps and compared between these between the five species of mosquitos studied. Some similarities to mammals were found, but of particular interest were the polycomb groups, long-range loops, which are two separated regions in the genome by large distances, formed by polycomb proteins, that are not present in other species. In this case, the loops were separated by several megabases and still a strong contact after finding each other in the nucleus space.

These loops usually have specific marks that silence the particular interactions, but mosquitos don’t have that, which suggests a novel manner in which the loop operates according to the researchers.