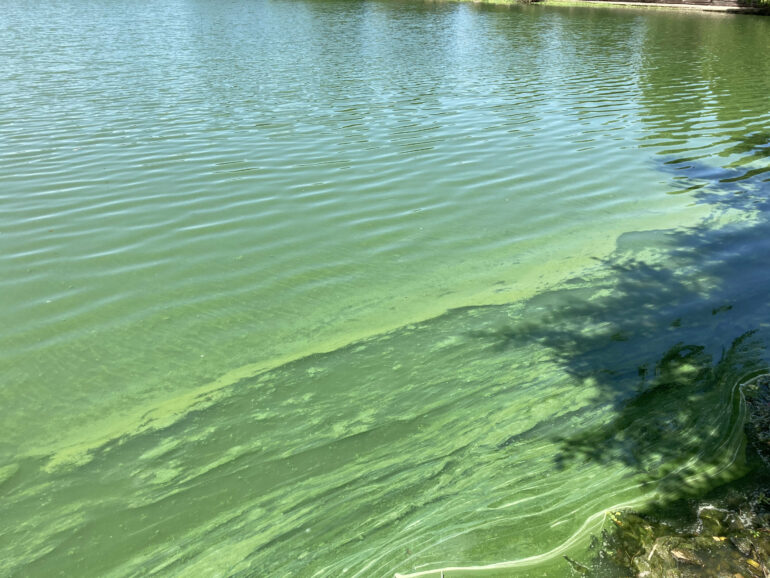 Harmful algal blooms create challenges around the globe for water quality and health risk management for humans, wildlife and pets. A team of researchers from the University of Oklahoma is leading an effort toward better management of Microcystis blooms and toxins through a new genome-based taxonomy.

OU Regents’ Professor of Biology Dave Hambright and members of his Plankton Ecology and Limnology Lab, in conjunction with OU microbiology professor Lee Krumholz, collaborated on this project with faculty members at the University of North Carolina, James Madison University and Auburn University. The results of their work were published in Science Advances.

Through the development of a new genome-based taxonomy, researchers for the first time will be able to characterize ecological niches of Microcystis, including nutrient requirements and seasonality, and ultimately, control harmful Microcystis blooms. The team has developed genetic markers that will allow researchers to identify Microcystis species present in water systems. In their paper, the researchers have identified 16 unique species, with as many as 30 or more likely, that are genetically distinct, but that do not correspond to current morphologically defined species.

“This new genome-based taxonomy lays the basis for researchers to formulate science-based proactive management programs to rid our waters of harmful Microcystis blooms,” Hambright said. “Our improved ability to identify and study species of this algae will aid our ability to reduce health risks, as well as manage and protect our increasingly vulnerable water resources.”

Understanding Microcystis ecology and evolution is foundational to lake and water quality management aimed toward preventing and reducing harmful Microcystis blooms. While traditional Microcystis taxonomy (classification into species) recognizes multiple species, these classifications are controversial as they are based on morphology and not ecological features. Additionally, they conflict with standard DNA-sequence-based classifications, which suggest one species with complex and variable ecologies.

Based on the work of OU biology doctoral student Katherine Cook, which was published in 2020 in Limnology & Oceanography, the group hypothesized Microcystis and its microbiome were a coevolved community of complementary interacting bacteria species (an interactome), with each necessary for the success of the others.

Their goal was to examine the genetic makeup of Microcystis from around the world using 122 published entire genomes and make predictions of potential metabolic functions that might be provided by the microbiome bacteria. Their paper represents the foundation for that goal in the form of a robust taxonomic classification, including evolutionary relationships.