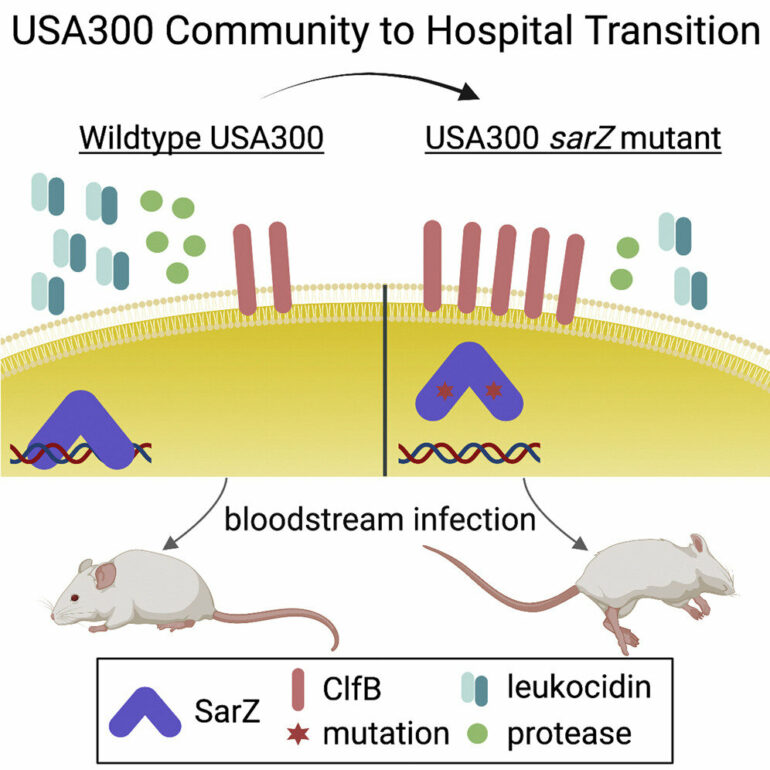 Researchers at Mount Sinai, in collaboration with researchers at New York University, have published a study in Cell Host & Microbe that sheds light on the mechanisms behind the severity, or virulence, of methicillin-resistant Staphylococcus aureus (MRSA) blood stream infections.

The study, published in January 2023, reveals that MRSA has undergone repeated mutations in the sarZ gene, a transcriptional regulator responsible for regulating virulence gene expression, leading to increased severity of blood stream infections in mouse models. The widespread community-associated MRSA USA300 lineage has recently become a leading cause of hospital-associated bloodstream infections (BSIs). In the study, the researchers leveraged the recent introduction of USA300 into hospitals and its limited genetic variation to find mutations that contribute to its success in a new environment.

The researchers found that USA300 infections exhibit altered virulence regulation. Using comparative genomics, they found the genes involved in this phenotype and discovered repeated and independent mutations in the transcriptional regulator sarZ. These mutations resulted in increased virulence of USA300 BSI isolates in a mouse model of BSI.

The sarZ mutations resulted in increased expression and production of the surface protein ClfB, which was shown to be critical for the pathogenesis of USA300 BSI isolates. MRSA is endemic across the United States and causes a wide range of diseases, including invasive bloodstream infections that are associated with high mortality. The study’s goal was to identify potential mechanisms by which MRSA has adapted to invasive infection environments.

“The findings of our study provide a better understanding of the factors contributing to MRSA virulence and may ultimately help uncover new treatment approaches,” said Harm van Bakel, Ph.D., Professor of Genetics and Genomic Sciences at the Icahn School of Medicine at Mount Sinai and one of the corresponding authors of the study. “The continued evolution of MRSA has changed the ways it regulates its virulence in bloodstream infections. Our work highlights the ongoing evolution of a major MRSA lineage and suggests that USA300 strains can optimize their fitness through altered regulation of virulence.”

The study focused on the USA300 lineage of MRSA, and future work will investigate additional lineages as well as adaptations in methicillin-susceptible Staphylococcus aureus infections (MSSA).

Provided by
The Mount Sinai Hospital