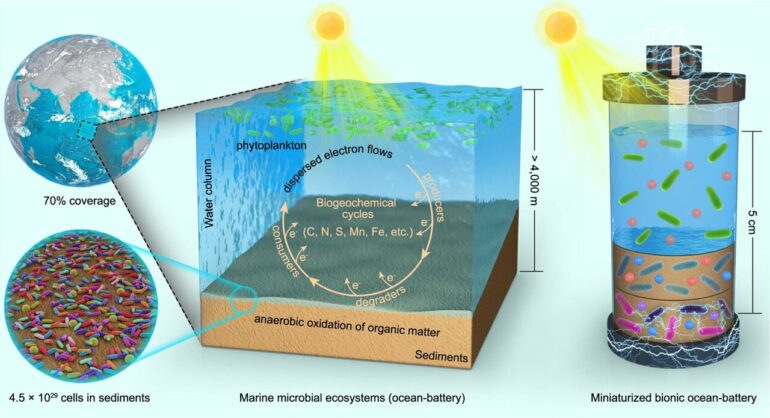 The researchers from the Institute of Microbiology of the Chinese Academy of Sciences have developed a miniaturized bionic ocean-battery, a bio-solar cell that converts light into electricity, by mimicking the basic ecological structure of marine microbial ecosystems. This study was published in Nature Communications.

Oceans cover about 70% of the Earth’s surface area. From the perspective of energy, marine ecosystems are a huge solar energy bioconversion system in which microorganisms dominate the energy conversion processes.

Energy conversion in marine ecosystems begins with photosynthesis. Photosynthetic microorganisms, called primary producers, located in the euphotic zone of water column, absorb solar energy and convert photons into electrons that are used to fix carbon dioxide into organic matter. The organic matter is partly consumed by plankton living in the water column and partly deposited into the marine sediments where facultative anaerobic or strictly anaerobic microorganisms mineralize the complex organic matter to carbon dioxide through successive oxidation.

Microorganisms in the marine sediments can be further divided into two groups. One group, called primary degraders, is responsible for the degradation of complex organic matter into simple organic compounds; the other group, called ultimate consumers, is responsible for the complete oxidation of simple organic compounds, releasing electrons for the biological reduction of elements such as nitrogen, iron, manganese and sulfur. Through photosynthetic carbon fixation and mineralization of organic matter, marine microbial ecosystems use solar energy to drive biogeochemical cycles.

Viewed from the outer space, marine microbial ecosystems with photoelectric conversion function can be considered as a huge “ocean-battery” charged by solar energy. However, the spatial and temporal distribution of microorganisms in the marine ecosystems is huge, and the electron transfer is sluggish and slow, so the efficiency of photoelectric conversion is low. The researchers proposed that is it possible to develop a spatial-temporally compacted ocean-battery with significantly improved energy efficiency.

In this synthetic microbial community, the engineered cyanobacteria are able to synthesize sucrose from carbon dioxide by using light energy and store light energy in sucrose; the engineered E. coli is responsible for degrading sucrose to lactate; S. oneidensis and G. sulfurreducens completely oxidize lactate to carbon dioxide through successive oxidation and transfer electrons to the extracellular electrodes to generate electric current, thereby converting light energy into electricity.

The researchers demonstrated that the four-species microbial community significantly outperformed the three-species community lacking G. sulfurreducens and the two-species community lacking E. coli and G. sulfurreducens in terms of internal resistance, maximum power density and stability, indicating that maintaining the complete ecological structure of the marine microbial ecosystems is essential for achieving efficient biophotoelectric conversion. The maximum power density of this four-species microbial community reached 1.7 W/m2, which is an order of magnitude higher than that of two-species biophotovoltaic system reported by the authors in previous work (Zhu et al, Nature Communications, 2019, 10: 4282).

The researchers further found that the oxygen produced by cyanobacteria during photosynthesis enabled aerobic respiration of E. coli and S. oneidensis, and the oxygen inhibited the electricity generation by S. oneidensis and the strictly anaerobic G. sulfurreducens, thus leading to negative effect on the overall performance. To solve this problem, researchers blocked the aerobic respiration pathway of E. coli and S. oneidensis. They developed a conductive hydrogel with oxygen barrier properties. The conductive hydrogel was used to encapsulate E. coli, S. oneidensis and G. sulfurreducens to form an oxygen-isolating artificial sediment layer capable of electron transfer.

This bio-solar cell mimics the basic physical structure and ecological structure of the ocean-battery, with the spatial-temporal scale significantly compacted and the number of species minimized, and can thus be considered as a miniaturized bionic ocean-battery.

This study demonstrates that a species-minimized and spatial-temporally compacted synthetic microbial community can reproduce the photoelectric conversion function of marine microbial ecosystems. The energy efficiency of this bionic ocean-battery is higher than that of marine ecosystems because of overcoming the network-like and sluggish electron transfer model.

The development of miniaturized bionic ocean-battery improves the biophotovoltaic efficiency and provides a new route for the development of efficient and stable bio-solar cells. This study also demonstrates the biotechnological potential of synthetic ecology.