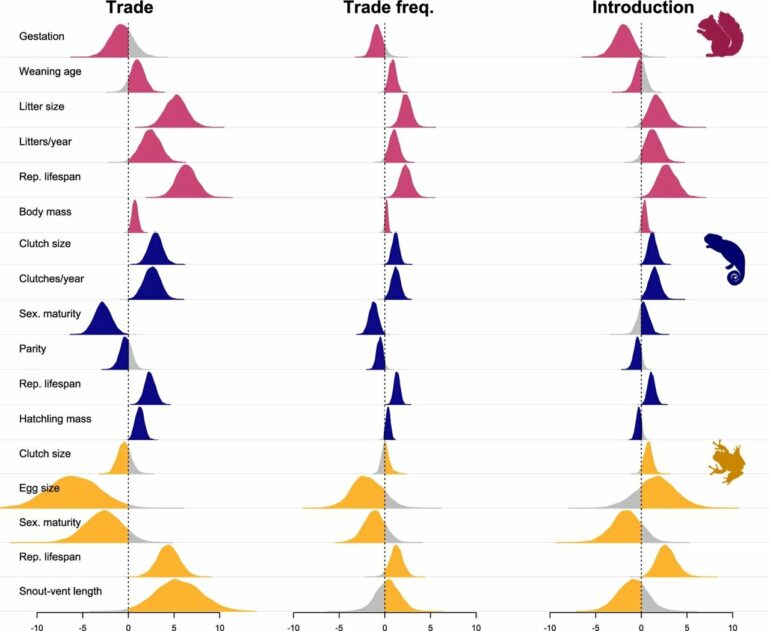 Researchers discovered that traded species produce large numbers of offspring across long reproductive lifespans, an unusual profile that is likely financially advantageous for trades involving captive breeding such as the pet, food and fur/skin trades.

Traded species that have also been introduced into non-native areas have a more extreme version of this same life history profile, suggesting that species most likely to become problematic invaders are at a heightened risk of trade and release.

The study suggests that humans favor species with high reproductive output for trade and release, which are the very species likely to become problematic invaders in future.

Full study results have been published in the journal Nature Communications.

Reflecting on the study results, first author Dr. Sally Street of Durham University, said, “Invasive species can cause huge environmental problems but are challenging to manage once established. This means it is really important to try to identify characteristics that increase the risk of species passing through the earliest stages of the invasion pathway, transportation and introduction, which have been relatively understudied.”

“We show that not only are life history traits useful for identifying species at risk of trade, introduction and ultimately invasion, human activities unfortunately seem to favor trade in species that are most likely to succeed if released. We hope our study will contribute to the management and mitigation of future invasions and the damage they can cause to biodiversity.”

Co-author of the study, Dr. Isabella Capellini of Queen’s University Belfast, said, “The rate of traded species is rapidly increasing worldwide; some of these species are accidentally or deliberately introduced and may become problematic invaders damaging native ecosystems. Given the high costs of managing alien invasive species, preventing the release of potentially invasive species may help protect native biodiversity.”

“To help achieve this, in our study we have also identified some vertebrate species at risk of becoming future invaders should they be traded and recommend such species to be monitored and banned from trade.”

They analyzed the role of life history traits in the probability that mammals, reptiles and amphibians are involved in the wildlife trade and that these species have been released outside of their native ranges.

Invasive species can cause huge environmental problems and monetary costs. Once established, invasive populations can be difficult or impossible to manage.

Therefore, understanding the early stages of invasion and predicting future invasions is crucial to minimizing this harm.