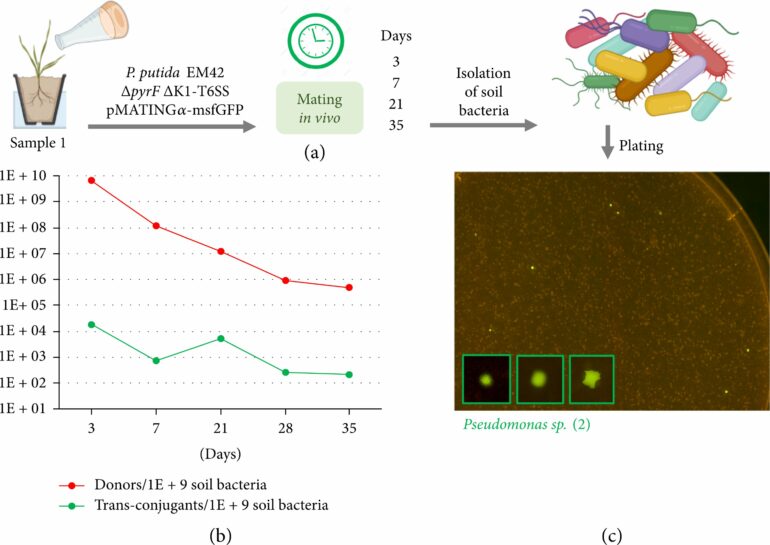 Microbiome engineering is at the forefront of improving human health and agricultural productivity. It aims to enhance ecosystem function by altering microbe composition. This can be accomplished through a “bottom-up” approach involving the introduction of engineered microbes into a community.

However, resistance from existing species hinders the establishment of new members. Instead, it is better to deliver foreign genetic material using the “top-down” approach, which involves horizontal gene transfer (HGT) between microbes. The primary goal here is to create efficient systems for the spread of engineered DNA across a complex microbial community.

HGT processes include conjugation, transformation, and transduction. The conjugation system carried by plasmid (small, extrachromosomal DNA) RP4 (also known as RK2), discovered in 1969, is a proven model of transferring DNA in both gram-positive and negative bacteria. Moreover, scientists are now willing to expand the toolbox for RP4 plasmid-based microbiome engineering across a wide range of microorganisms.

To this end, a research team from the Spanish National Centre for Biotechnology in Madrid have reassembled the plasmid RP4 to create a vector that can spread genetically encoded traits across diverse microbial communities.

The researchers modified the functional components of RP4 to create “pMATING,” a systematic self-transmissible plasmid vector. The study was published in BioDesign Research by a team led by Prof. Victor de Lorenzo and colleagues Tomás Aparicio, Jillian Silbert, and Sherezade Cepeda. “The end result of our research was a toolset optimized for gene delivery and circulation in natural microbial consortia,” says Prof. Lorenzo.

With this finding in mind, the researchers conducted two additional conjugation tests to transfer DNA from E.coli to the gram-positive bacterium Bacillus subtilis and the yeast Saccharomyces cerevisiae. They were astounded to discover that pMATING could transfer DNA to both recipients, indicating a “transkingdom conjugation” from bacteria to fungi, a concept that has rarely been reported elsewhere.

The researchers then investigated if their newly created plasmid could spread to different bacterial species. Independent microbial pools were isolated from soil samples taken from two different locations in Spain, and pMATING transfer was tracked using a green-fluorescent tag. Except a few, the majority of these isolates were able to successfully receive the DNA.

This transfer was also validated in an out-of-laboratory natural soil sample covered with P. putida donor bacteria. These results appear to address a major concern about the application of HGT to bacteria living in the natural environment.

While the study answers most questions about vector transfer across bacterial communities, the biggest unknown is whether recipients become donors after receiving the plasmid. “It is true that pMATING allows bacteria to pass on the plasmid to other bacteria. However, this is not always the case. This is not due to the recipient’s inability to accept foreign DNA. Rather, some donors may be reluctant to give their DNA to other species,” Prof. Lorenzo explains.

While previous studies have reported conjugative transfer among various microorganisms, pMATING is the first to deliver genes across environmental microbiomes. Prof. Lorenzo concludes, “With its relatively small size and ease of use, pMATING2 can be a fantastic tool for gene flow across complex bacterial communities. Future vectors inspired by it will be useful in boosting target microbial niches for medicinal, environmental, and industrial applications.”