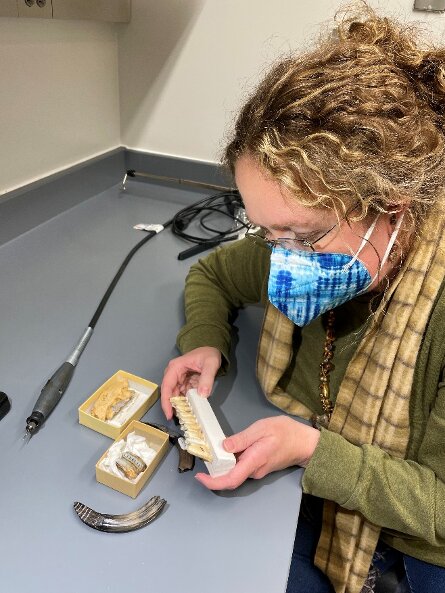 Life has two choices: Survive or go extinct. And surviving isn’t easy. Scientists often debate why species become specialized or generalized in regard to their diet. Specialist species may be better able to procure food by hunting prey or selecting leaves. However, being a generalist allows animals to adapt to how much food is available. Both paths have tradeoffs. Generalists are essentially “jacks of all trades and masters of none,” while specialists are masters of their specific trade.

What if species could be both specialists and generalists? Over the past decade, Larisa DeSantis, paleontologist and associate professor of biological sciences, has worked with a team of former Vanderbilt undergraduate and graduate students, postdoctoral scholars and experts from across the globe to show how species can be both generalized at the species level and specialized individually—a probable key to their success.

The study “Global long-term stability of individual dietary specialization in herbivorous mammals,” published in the journal Proceedings of the Royal Society B on Feb. 2, demonstrates a phenomenon that has long been overlooked—both generalist and specialist species are individually specialized. These findings have profound ecological, evolutionary and even conservational implications of critical relevance to understanding ancient, modern and future ecosystems.

Prior to this work, patterns of individual specialists had been demonstrated primarily in some modern species, and its generality across the world and over evolutionary time was unknown. In research published in Nature Human Behavior in 2018, humans were credited as occupying a previously empty niche—that of a “generalist specialist,” defined as the ability to both generalize (as a species) and specialize (as individuals) in one’s environment. However, DeSantis and her team demonstrate that the “generalist specialist” niche is more common than anticipated and can instead be viewed as a ubiquitous characteristic of generalists.

The paleontologists assessed dietary breadth in herbivorous mammals using a series of perpendicular samples taken along the length of herbivore teeth to measure whether animals were primarily browsing, grazing or eating a mixture of vegetation over a period of months to years. Stable isotope analyses of modern and fossil mammalian herbivore teeth demonstrate that almost all herbivores comprise individuals specializing on a narrow range of food types. Therefore, the ecological drivers and consequences of this pattern are common ecological phenomena that have persisted across the globe for millions of years.

DeSantis and her team conclude that humans are not unique in being “generalist specialists” and their key to success is not novel but rather a common feature of generalist species.

“This work changes the way we perceive and understand individual feeding behavior in herbivorous mammals across the globe and through time, affecting management and conservation actions of relevance to herbivorous mammals,” DeSantis said. “For example, we can no longer assume that each individual herbivore will exhibit the dietary behavior of the broader species or potentially even other members of its population. Instead, individuals are specialists, regardless of whether they belong to a species typically classified as a specialist or a generalist, and we must manage for them accordingly—conserving habitats that allow for individual specialization.”

“Individual specialization likely reduces competition within and between species, increases carrying capacities and may have stabilizing effects on species and communities over time,” said Melissa Pardi, assistant curator of geology at the Illinois State Museum, who contributed to this research as a National Science Foundation Postdoctoral Fellow.

“For anyone who has shot sporting clays, the search picture and lead for a clay-bird flying overhead is quite different from the search picture and lead of a clay-rabbit hopping along the ground,” DeSantis said. “A predator has choices to make: Try to hunt and eat everything or to specialize on certain prey. The same is true for herbivores, and the result of individual specialization has many positive consequences with few tradeoffs at the species level, a potential reason why it is so ubiquitous today.”

“Just like humans, it seems that individual herbivores, regardless of species, have their dietary likes and dislikes, and they tend to stick these to regardless of what others in the population might be doing. It’s a neat demonstration of individual personality traits having enormous flow-on effects on population and species health,” stated Julien Louys, a co-author of the study and deputy director of the Australian Research Centre of Human Evolution at Griffith University in Brisbane.

Michael Greshko, a former Cornelius Vanderbilt Scholarship awardee and current science writer for National Geographic, also contributed to this study while he studied ecology, evolution and organismal biology as an undergraduate student conducting research with DeSantis.


Citation:
Researchers show that generalist species are ‘jack of all trades and masters of all’ (2022, February 9)