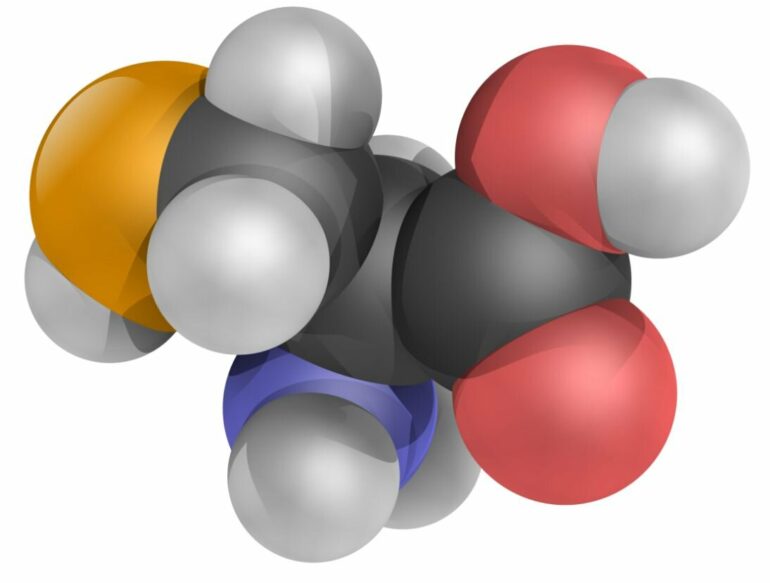 Scientists have discovered that a human receptor protein has the ability to detect individual amino acids in exactly the same way that bacteria do.

The finding could lead to enhancements of drugs derived from the amino acid GABA, but also has evolutionary implications: It adds to the sparse evidence suggesting there are commonalities between bacteria and humans with respect to sensing the presence of essential components of life, such as oxygen and food.

Receptors on cell surfaces detect all kinds of nutrients—fats, sugars and vitamins, for example—but use different types of protein segments called sensors, and no common chemical detection mechanism is currently known.

In this work, scientists discovered a universal sensor present in many different receptors that detects amino acids by precisely interacting with the two groups of atoms that are shared by all amino acids.

“For the first time, we’ve found the universal way of detecting amino acids. Nearly every organism can do it through this mechanism,” said Igor Jouline, senior author of the study and a professor of microbiology at The Ohio State University.

“In our experience, it’s very rare when we can extrapolate a very specific sensory function with such precision from bacteria to humans, because these life forms are separated by such a long evolutionary time—about 3 billion years.”

The study is published today (March 1, 2022) in Proceedings of the National Academy of Sciences.

Amino acids are the building blocks of life, assembling proteins, which perform most of the work inside cells, from the information stored in genes.

In earlier studies of a bacterium that causes human infection, Jouline’s lab and collaborators in Spain found several receptors that recognized amino acids, and identified a structural feature that all of those proteins shared. To further understand this characteristic, first author Vadim Gumerov, a research scientist in the Jouline lab, looked for other organisms that had similar receptors, scouring and comparing genomic data to zero in on that very specific structural feature, called a motif, that detects amino acids. Through analysis of sequence and structure information, Gumerov identified the amino acid-binding motif in human receptors.

This motif is located in an outer-facing segment of the protein that crosses a cell’s outer membrane. Combining their computations with available experimental data, the team determined that this motif exists in proteins found in organisms spanning the tree of life, with the exception of fungi and a few plant species. Further analyses showed that all of the motif-containing proteins bind amino acids—and only amino acids.

In bacteria, this sensor helps the organisms navigate toward amino acids, an important food source.

“It’s a part of a primitive nervous system for bacteria, which detects signals and helps them make decisions,” Jouline said. “There’s a spectacular parallel because in humans, this amino acid sensor is also a part of the nervous system. We identified this sensor in human calcium channels that modulate release of neurotransmitters from synapses in several neuronal tissues. Malfunctioning of these calcium channels results in neuropathic pain.”

That’s where GABA comes in. Before this study, drug developers knew that medications derived from GABA (gamma-aminobutyric acid), treating neuropathic pain, fibromyalgia and seizures, relieve symptoms linked to these disorders by attaching to a protein in the human nervous system.

That protein, it turns out, is the one the research team found in humans that contains the motif enabling detection of amino acids, including GABA.

Collaborators in the United Kingdom helped confirm this finding, testing the effects of mutating the motif in experiments using a rat protein that functions in exactly the same way as the human protein. Altering the motif changed the function of the entire receptor, preventing the GABA-derived drug gabapentin from making an effective connection.

The signals that make cells self-destruct

“Our work is not solving pharmacological problems, but it showed precisely where on the human protein GABA-derived drugs will bind, and also how they will bind,” Jouline said. “That’s important, because now if they want to improve it or test different versions of the drug, they know the exact chemical environment. We’re providing these two missing points—which part of the drug will bind to which amino acid of the protein, and how it’s oriented in 3D space.”

Though there may never be a definitive answer to the age-old question of what exactly bacteria and humans have in common biologically, Jouline has begun a broader search for sensors that have a role in sustaining life.

“Now we know where to look—not at whole proteins, but only at their segments that are involved in recognizing physical and chemical parameters important to all living systems,” he said.