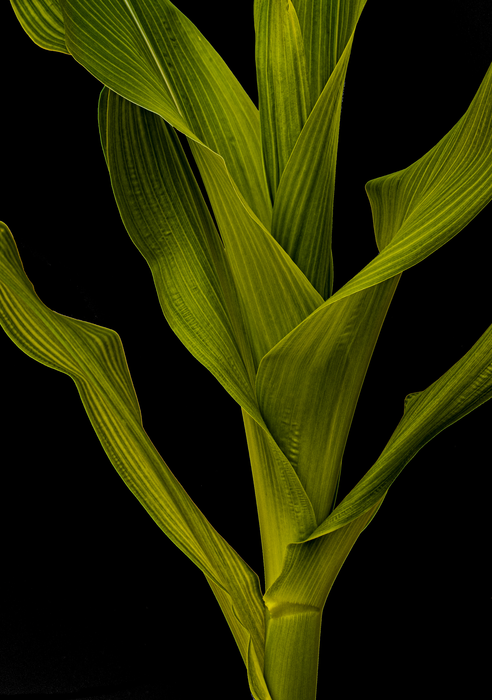 Grass is cut regularly by our mowers and grazed on by cows and sheep, yet continues to grow back. The secret to its remarkable regenerative powers lies in part in the shape of its leaves, but how that shape arises has been a topic of longstanding debate.

The debate is relevant to our staple crops wheat, rice and maize, because they are members of the grass family with the same type of leaf.

One of the corresponding authors Professor Enrico Coen said of the findings which appear in Science: “The grass leaf has been a conundrum. By formulating and testing different models for its evolution and development we’ve shown that current theories are likely incorrect, and that a discarded idea proposed the 19th century is much nearer the mark.”

Flowering plants can be categorized into monocots and eudicots. Monocots, which include the grass family, have leaves that encircle the stem at their base and have parallel veins throughout. Eudicots, which include brassicas, legumes and most common garden shrubs and trees, have leaves that are held away from the stem by stalks, termed petioles, and typically have broad laminas with net-like veins.

In grasses, the base of the leaf forms a tube-like structure, called the sheath. The sheath allows the plant to increase in height while keeping its growing tip close to the ground, protecting it from the blades of lawnmowers or incisors of herbivores.

In the 19th Century, botanists proposed that the grass sheath was equivalent to the petiole of eudicot leaves. But this view was challenged in the 20th century, when plant anatomists noted that petioles have parallel veins, similar to the grass leaf, and concluded that the entire grass leaf (except for a tiny region at its tip) was derived from petiole.

Using recent advances in computational modeling and developmental genetics, the team revisited the problem of grass development. They modeled different hypotheses for how grass leaves grow, and tested the predictions of each model against experimental results. To their surprise, they found that the model based on the 19th century idea of sheath-petiole equivalence was much more strongly supported than the current view.

This mirrors findings in animal development where a discarded theory—that the ‘underbelly’ side of insects corresponds to the back of vertebrates like us—was vindicated in the light of fresh developmental genetic research.

The grass study shows how simple modulations of growth rules, based on a common pattern of gene activities, can generate a remarkable diversity of different leaf shapes, without which our gardens and dining tables would be much poorer.

“Evolution of the grass leaf by primordium extension and petiole-lamina remodeling,” is published in the journal Science.