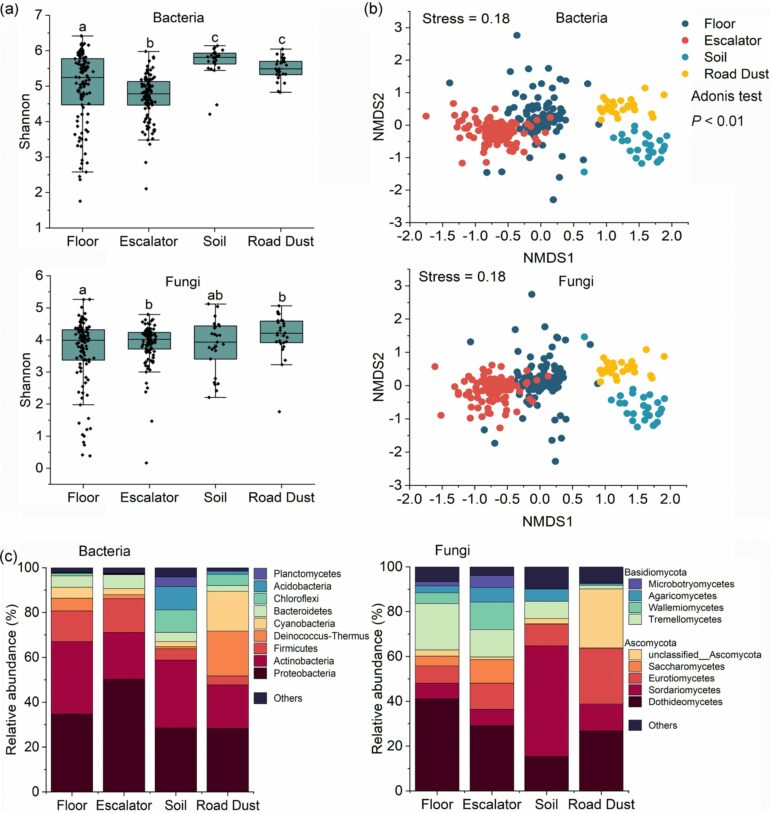 This week in mSystems, researchers report that the floors, escalators and other surfaces of shopping malls have their own microbial communities, assembled from the microbes of the people passing through. The mall microbiome, they found, includes a large fraction of potential pathogens, especially inside the building, suggesting that surface-to-person transmission could spread disease.

“Mall surfaces act as a pathway through which microbes move between mall areas, even between very distant regions,” said Xin-Li An, Ph.D, at the Chinese Academy of Sciences’ Institute of Urban Environment (IUE), in Xiamen. She co-led the study with Jian-Xin Xu, Ph.D., at the same institute. “Population exposure to the mall microbiome possibly alters the trajectory of health” by bringing people into contact with pathogens, she said.

The findings suggest that the movement of pathogens in a mall isn’t limited to person-to-person encounters but can also occur through person-to-surface or surface-to-person transmissions.

In previous studies, researchers in China reported that shopping malls have been at the center of many local outbreaks of COVID-19 during the pandemic. Those reports led An and her colleagues to think about the role of malls—which bring people together for a variety of activities—in the spread of pathogens in general.

“Shopping malls could be a superspreading environment for microbial contamination,” An said.

The researchers collected samples in spring and summer 2022 from the floors and escalators of 20 shopping malls in Xiamen, China, as well as from the immediate exterior of the building, including greenbelt soils and road dust. They used 16s rRNA sequencing to analyze the samples for bacterial populations and ITS amplification to identify fungal species. They found the highest bacterial species richness in the mall floors, followed by escalators, then road dust, then the greenbelt soils.

The interior environments showed higher concentrations of human pathogens, as well as a higher-proportion of antimicrobial resistance-associated genes, than the outdoor samples. Which species dominated the population varied by season. And although the microbiomes varied mall to mall and season to season, the researchers did find a core microbial community that was shared in more than 80% of the 274 total samples. Most of those microbes were associated with potential pathogens.

That core included Acinetobacter baumannii, a Gram-negative bacterium behind many nosocomial, or hospital-acquired, infections. It also included Kocuria kristinae, an ordinarily harmless, Gram-positive bacteria that lives on the skin and can cause infections in patients with compromised immune systems. Cladosprorium, a kind of mold that can cause allergies and, in some cases, infections, was also part of the core community.

An’s work at the IUE focuses on human pathogens—especially viruses and bacteria with antimicrobial resistance genes—in urban environments. In addition to malls, those environments include wastewater treatment plants, wet markets and farms. Understanding the mall’s microbiome is an important component of a larger goal of keeping watch for potential public health threats. The next step is to collect more data on how a mall microbiome changes over time and space, and to look for more commonalities.

The new study suggests another direction for new research, An added, to study microbial exposures that arise through breathing. In a future study, the researchers plan to focus on the air microbiome in the malls.

Provided by
American Society for Microbiology