Sizing up competition based on sensitivity to pain 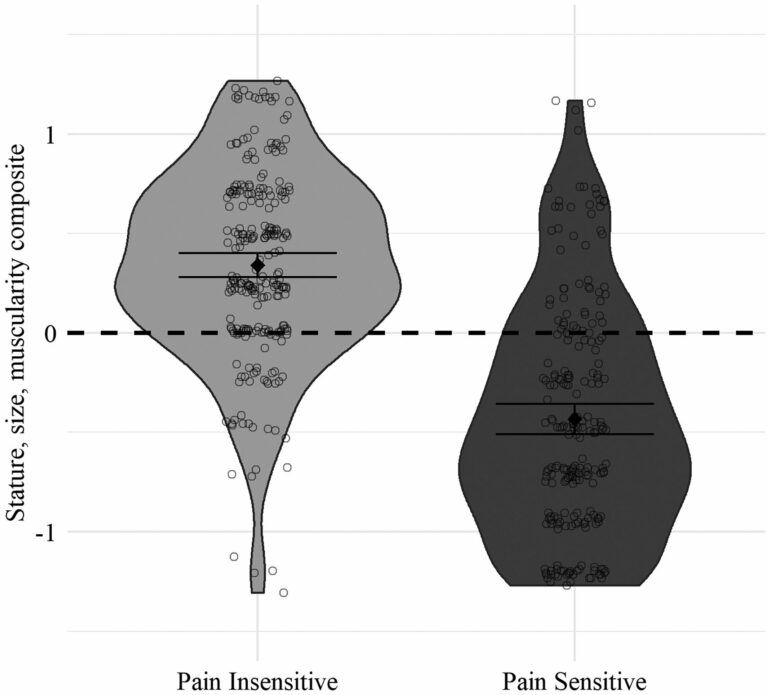 Before any physical conflict, people assess their opponent’s features to determine if the ideal tactical response is to fight, flee or attempt to negotiate.

Throughout evolution, bigger, stronger animals have won fights with smaller, weaker animals. Because of this, when people think about the features that determine who will win a fight, they summarize those features by adjusting a mental picture of their opponent’s size and strength.

According to a new study co-led by Wilson Merrell, a doctoral candidate in psychology at the University of Michigan, and Daniel Fessler, professor of anthropology at UCLA, how we picture an opponent is affected by a psychological feature of the opponent—namely how sensitive he is to pain.

They found that men described as insensitive to pain were rated larger and stronger than men who were sensitive to pain. Because it allows people to persist longer in violent conflict, insensitivity to pain can be a valuable characteristic when it comes to winning fights, and this is reflected in how we picture an opponent, the researchers said.

The findings appear in the current issue of Evolution and Human Behavior.

In a final study, the researchers tested whether a man’s access to a tool that could be used as a weapon affected how sensitive to pain he appeared to be. Participants either saw a picture of a man holding an object that could be used to hurt someone (like a kitchen knife) or an object that could not (like a spatula). The men holding dangerous tools were seen as more insensitive to painful situations like getting a paper cut or bumping their head on a piece of furniture than men holding harmless tools.

The research suggests that representations of physical characteristics like height and muscularity are also subject to assessments of psychological traits, like pain sensitivity.

“Perceptions of others’ sensitivity to pain may play an important role in a variety of social interactions,” Fessler said. “When I first started exploring this topic, I was surprised that so little research had been done outside of medical contexts.

Merrell said the relationship between assessments of pain insensitivity and physical size may have implications for social contexts where judgments about pain, size and threat influence decision-making.

For example, future work could explore how stereotypes about high pain tolerance, which are often applied to Black men in the United States, play into stereotypes about physical size and influence decision-making in power-imbalanced situations, such as health care and policing.


Citation:
Sizing up competition based on sensitivity to pain (2023, January 3)