Snail competition leads to fewer parasites that cause schistosomiasis 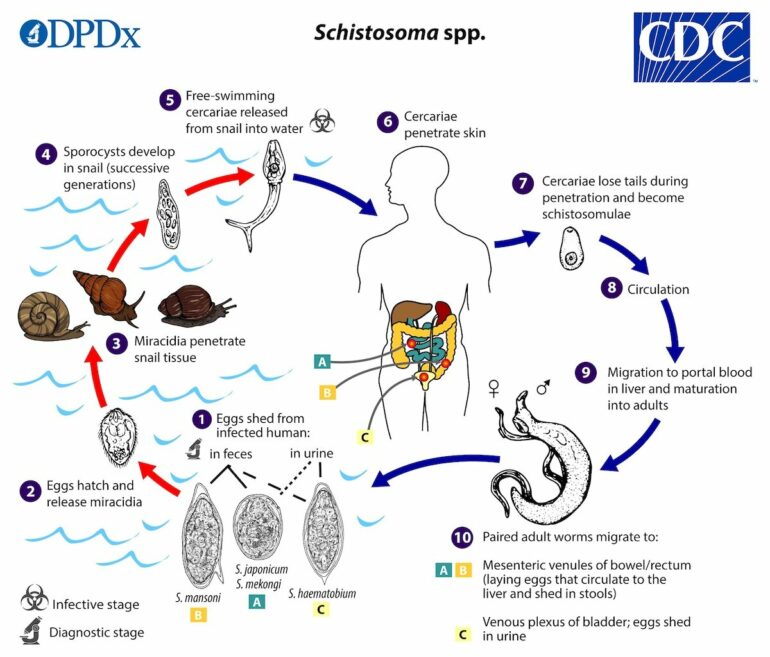 Schistosomiasis is a debilitating disease caused by a parasitic worm that develops in freshwater snails before infecting people. Knocking back snail populations with pesticides is one method to control the spread of the disease, also known as “snail fever.”

“We’ve shown that the more snails you have in a freshwater source, the less dangerous each individual snail is, in terms of the number of parasites they’re releasing,” says David Civitello, an Emory assistant professor of biology and lead author of the study. “The incredible strength of our finding is that we’ve demonstrated the effect both in the field, using natural transmission sites, and in an experimental context, through outdoor laboratory experiments.”

The research carries important implications for policies aimed at reducing the transmission of schistosomiasis. Considered one of the most significant of the neglected tropical diseases, the parasites that cause schistosomiasis currently infect more than 200 million people.

“Our results suggest that if you apply a heavy dose of pesticides to reduce a snail population, the infectivity of the remaining snails might actually skyrocket,” Civitello says. “It’s basically impossible to kill every snail and so you set the stage for a rebound in infection risk. As the snail population begins to recover, our data tells us that this is a time with extremely high potential for transmission of the parasites to humans.”

Previous laboratory experiments had found that when an individual freshwater snail infected with the parasite is well fed, it can generate as many as thousands more parasites per day compared to an underfed snail. In fact, an underfed infected snail may generate as few as a single parasite per day.

“In general, when an animal needs to fight off an infection of some kind, it helps to have good nutrition to support the immune system,” Civitello says. “It appears to be the opposite case in these freshwater snails. When the snails are full of energy, it provides more nutrients for the parasites to steal from them and to reproduce.”

Chronic infections of schistosomiasis cause considerable morbidity in sub-Saharan Africa and parts of the Middle East, South America and Southeast Asia. The disease cycles between humans and freshwater snails that live in water sources where people may bathe, wash their clothes and dishes and collect water for household use. Children, who like to play in water, are at especially high risk for infection.

When eggs of the parasitic worms hatch in water, the larvae burrow into snails. Once the larvae develop into free-swimming worms, they burrow back out of their snail hosts and return to the water. These swimming worms can then burrow into the skin of people who come into contact with the water.

Inside their human hosts, the worms enter blood vessels where they eat red blood cells for fuel as they mature into adults, pair up and mate. The female lays hundreds of thousands of eggs per day. Many of the eggs are excreted through feces and urine that re-enters water sources, continuing the cycle of infection. Some of the eggs, however, become lodged in the tissues and organs of their human hosts, leading to immune reactions and progressive damage to organs, such as the liver, the bladder, kidneys and the urogenital tract. One of the classic symptoms of a chronic infection is blood in the urine.

The prescription medication Praziquantel treats schistosomiasis but has limitations. “One problem is that the drug kills the mature adult schistosomes in humans, but not schistosomes that are only five or six weeks old and still maturing,” Civitello says.

And a follow-up drug treatment does not eliminate the infection in the environment.

“There is growing recognition in recent years that effective control of freshwater snails is needed, along with treatment of people, in order to disrupt transmission of schistosomiasis,” Civitello says. “In many cases, however, snail control policies have not been updated for decades.”

For the PNAS paper, the researchers wanted to test whether the effect of food intake seen on the infection rate of individual freshwater snails in a laboratory would scale up to a population in the wild. Their hypothesis was that the larger the snail population, the more the snails would have to compete for food resources, lowering their energy levels along with their infectivity rate.

They conducted field research in the Mwanza region of Tanzania where schistosomiasis is endemic, in collaboration with Tanzania’s National Institute for Medical Research Mwanza Center. Running water is not accessible in villages in the area and many people use surface water ponds and hand-dug open wells that dot the clay-soil landscape.

The outdoor laboratory experiments, conducted in collaboration with the University of South Florida, further showed how the growth of a snail population from low to high density creates a burst of infectivity among the population before competition once again forces the infectivity to subside.

“Our results suggest that, if you treat water bodies infrequently with a pesticide to control snails, you are likely to soon get a rebound of the snail population with a higher infectivity rate, potentially creating a surge of transmission to people,” Civitello. “It may be better either to not apply a pesticide at all, or else to apply the pesticide more frequently to prevent the snails rebounding.”

The Civitello Lab plans to continue to collaborate with colleagues in Tanzania to gather more detailed data to help develop the most effective methods of freshwater snail control, for use in combination with other preventative methods for schistosomiasis.

“It’s important to unite the ecology of a pathogen with human disease interventions and control measures,” Civitello says.