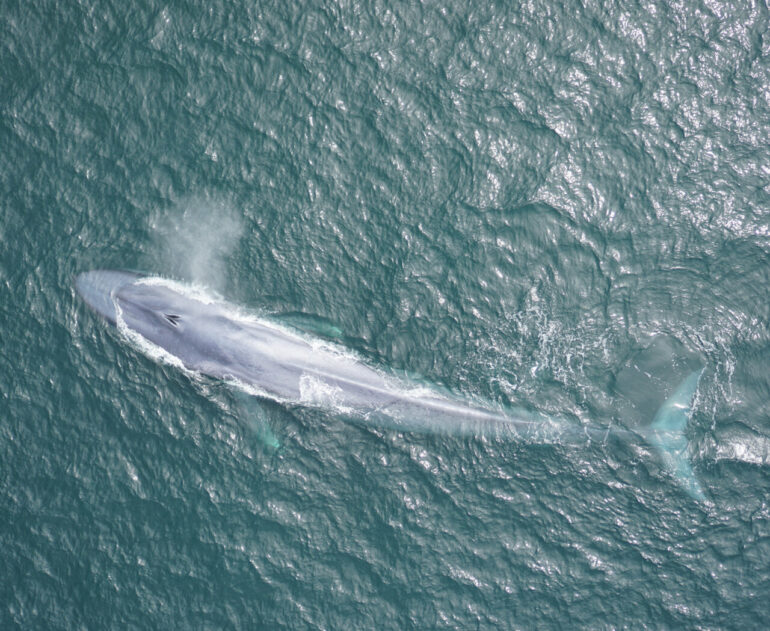 A study by MBARI researchers and their collaborators published today in Ecology Letters sheds new light on the movements of mysterious, endangered blue whales. The research team used a directional hydrophone on MBARI’s underwater observatory, integrated with other advanced technologies, to listen for the booming vocalizations of blue whales. They used these sounds to track the movements of blue whales and learned that these ocean giants respond to changes in the wind.

Along California’s Central Coast, spring and summer bring coastal upwelling. From March through July, seasonal winds push the top layer of water out to sea, allowing the cold water below to rise to the surface. The cooler, nutrient-rich water fuels blooms of tiny phytoplankton, jumpstarting the food web in Monterey Bay, from small shrimp-like krill all the way to giant whales. When the winds create an upwelling event, blue whales seek out the plumes of cooler water, where krill are most abundant. When upwelling stops, the whales move offshore into habitat that is transected by shipping lanes.

“This research and its underlying technologies are opening new windows into the complex, and beautiful, ecology of these endangered whales,” said John Ryan, a biological oceanographer at MBARI and lead author of this study. “These findings demonstrate a new resource for managers seeking ways to better protect blue whales and other species.”

The directional hydrophone is a specialized underwater microphone that records sounds and identifies the direction from which they originate. To use this technology to study blue whale movements, researchers needed to confirm that the hydrophone reliably tracked whales. This meant matching the acoustic bearings to a calling whale that was being tracked by GPS. With confidence in the acoustic methods established, the research team examined two years of acoustic tracking of the regional blue whale population.

This study built upon previous research led by MBARI Senior Scientist Kelly Benoit-Bird, which revealed that swarms of forage species—anchovies and krill—reacted to coastal upwelling. This time, researchers combined satellite and mooring data of upwelling conditions and echosounder data on krill aggregations with the acoustic tracks of foraging blue whales logged by the directional hydrophone.

Blue whales recognize when the wind is changing their habitat and identify places where upwelling aggregates their essential food—krill. For a massive animal weighing up to 165 tons, finding these dense aggregations is a matter of survival.

While scientists have long recognized that blue whales seasonally occupy Monterey Bay during the upwelling season, this research has revealed that the whales closely track the upwelling process on a very fine scale of both space (kilometers) and time (days to weeks).

“Tracking many individual wild animals simultaneously is challenging in any ecosystem. This is especially difficult in the open ocean, which is often opaque to us as human observers,” said William Oestreich, previously a graduate student at Stanford University’s Hopkins Marine Station and now a postdoctoral fellow at MBARI.

“Integration of technologies to measure these whales’ sounds enabled this important discovery about how groups of predators find food in a dynamic ocean. We’re excited about the future discoveries we can make by eavesdropping on blue whales and other noisy ocean animals.”

Blue whales (Balaenoptera musculus) are the largest animals on Earth, but despite their large size, scientists still have many unanswered questions about their biology and ecology. These gentle giants seasonally gather in the Monterey Bay region to feed on small shrimp-like crustaceans called krill.

MBARI’s MARS (Monterey Accelerated Research System) observatory offers a platform for studying the ocean in new ways. In 2015, MBARI researchers installed a hydrophone, or underwater microphone, on the observatory. The trove of acoustic data from the hydrophone has provided important insights into the ocean soundscape, from the migratory and feeding behaviors of blue whales to the impact of noise from human activities.

In 2019, MBARI and the Naval Postgraduate School installed a second hydrophone on the observatory. The directional hydrophone gives the direction from which a sound originated. This information can reveal spatial patterns for sounds underwater, identifying where sounds came from. By tracking the blue whales’ B call—the most powerful and prevalent vocalization among the regional blue whale population—researchers could follow the movements of individual whales as they foraged within the region.

How some tissues can ‘breathe’ without oxygen

“The integrated suite of technologies demonstrated in this paper represents a transformative tool kit for interdisciplinary research and mesoscale ecosystem monitoring that can be deployed at scale throughout protected marine habitats. This is a game changer and brings both cetacean biology and biological oceanography to the next level,” said Jeremy Goldbogen, an associate professor at Stanford University’s Hopkins Marine Station and a coauthor of the study.

This new methodology has implications not only for understanding how whales interact with their environment and one another but also for advancing management and conservation.

“These kinds of integrated tools could allow us to spatially and temporally monitor, and eventually even predict, ephemeral biological hotspots. This promises to be a watershed advancement in the adaptive management of risks for protected and endangered species,” said Brandon Southall, president and senior scientist for Southall Environmental Associates Inc. and a coauthor of the research study.