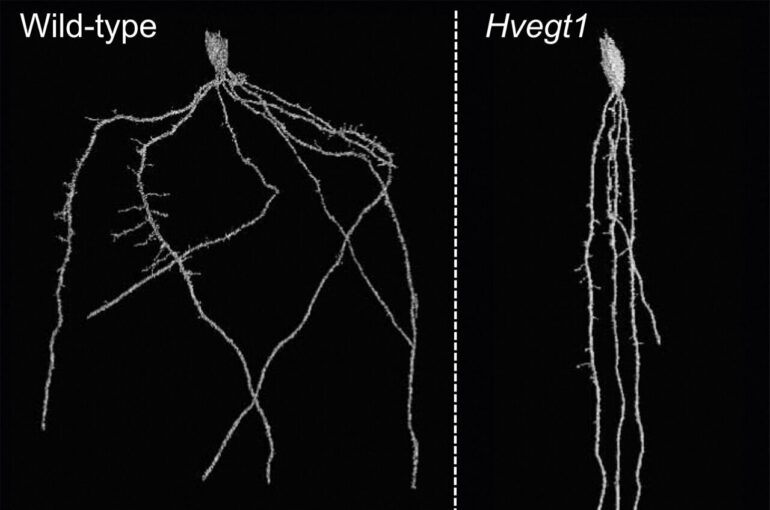 Researchers have discovered a new gene in barley and wheat that controls the angle of root growth in soil, opening the door to new cereal varieties with deeper roots that are less susceptible to drought and nutrient stress, thus mitigating the effects of climate change.

“The angle at which barley roots grow down into the soil enables them to capture water and nutrients from different soil layers,” said Dr. Haoyu (Mia) Lou from the University of Adelaide’s School of Agriculture, Food and Wine who was joint first author on the study.

“Shallow roots enable plants to capture phosphate and surface water, while deeper, straighter roots can stabilize yield by accessing deeper water and nitrate; they can also bury carbon deeper in the soil.”

Working alongside scientists from the UK, Italy, Germany and the U.S. the team identified a new gene called Enhanced Gravitropism 1 (EGT1) in barley.

“By identifying the genes that control root growth angle we can greatly aid efforts to develop crops that are better adapted to specific soil types and more resilient to fluctuating environmental conditions, helping to mitigate carbon burden and counter the effects of climate change,” said Dr. Lou.

“We have found that mutants lacking function of the EGT1 gene exhibit a steeper growth angle in all classes of roots.

“Remarkably, the roots behave as if they are overly sensitive to gravity—they are unable to grow outwards from the plant, and instead grow straight down.”

Australian farmers face a wide range of risks, but they are particularly exposed to variability in climate which has a flow-on effect to commodity prices. Severe droughts are frequent and prolonged with eastern and south-eastern parts of the country particularly badly affected. Coupled with rising fertilizer costs and increased pressure to achieve sustainability, there is a pressing need to develop new crop varieties better able to capture nutrients, carbon and water.

Co-author Associate Professor Matthew Tucker, Deputy Director of the Waite Research Institute said: “These findings were made possible through exciting technologies such as X-ray CT, enabling root growth to be traced in soil. They could immediately help cereal breeders to select varieties with straighter roots from their genetic stocks, or aid in the development and deployment of new EGT1 alleles in the near future.”

Dr. Lou undertook the research as part of a joint Ph.D. program with the University of Nottingham, UK. The team’s findings have been published in the journal Proceedings of the National Academy of Sciences (PNAS).

More information:
Root angle is controlled by in cereal crops employing an antigravitropic mechanism, Proceedings of the National Academy of Sciences (2022). DOI: 10.1073/pnas.2201350119.