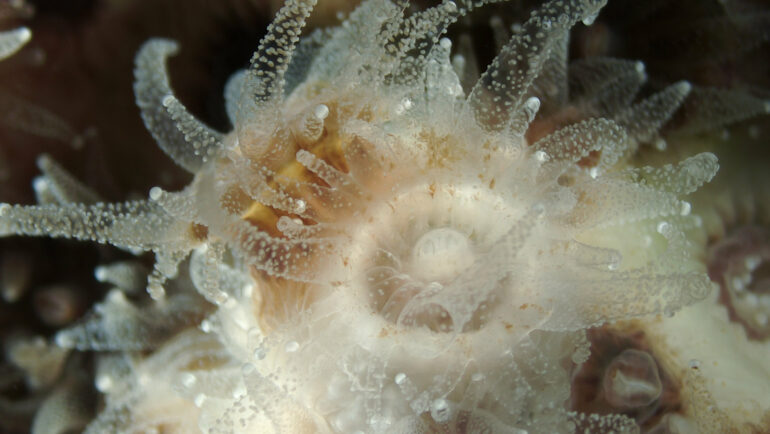 As winter approaches, many species of animals—from bears and squirrels to parasitic wasps and a few lucky humans—hunker down for some needed rest. The northern star coral (Astrangia poculata) also enters a hibernating state of dormancy, or quiescence, during this time. But what happens to its microbiome while it’s sleeping?

A study led by University of California, Davis, Assistant Professor Anya Brown found that microbial communities shift while this coral enters dormancy, providing it an important seasonal reset. The work may carry implications for coral in warmer waters struggling with climate change and other environmental issues.

“Dormancy, at its most basic, is a response to an environmental stressor—in this case, cold stress,” said Brown, who is part of the UC Davis Bodega Marine Laboratory in the Department of Evolution and Ecology. “If we understand more about this recovery period, it might help us understand what microbes may be responsible for recovering coral in warmer tropical systems.”

The study, published in the journal Applied and Environmental Microbiology with scientists from Woods Hole Oceanographic Institution (WHOI), and Roger Williams University, is the first to demonstrate a persistent microbial community shift with dormancy in a marine animal.

“This study shows that microbes respond to stress and recover in a predictable pattern,” said co-author Amy Apprill, an associate scientist at WHOI. “It’s foundational knowledge that may help us develop probiotics or other microbial treatments for stressed tropical corals.”

While you were sleeping

From October 2020 through March 2021, researchers dove 60 feet down into cold, nearly 40 degrees Fahrenheit water to collect 10 distinct colonies of the coral A. poculata from a dock in Woods Hole, Massachusetts. This coral is found in Atlantic waters extending from the Gulf of Mexico to Massachusetts. As water temperatures cool, the coral retracts its tentacles, stops eating or responding to touch, and goes dormant.

The scientists characterized the microbiomes of the wild coral before, during and after dormancy. They found that while the coral “sleeps,” its microbiome sheds nutrient-loving and pathogen-associated microbes, while increasing microbes that may contribute nitrogen while the coral is no longer eating. The scientists found that this restructuring helps the corals maintain their microbial community structure.

“We have long hypothesized that Astrangia’s seasonal dormancy allows the coral microbiome to reset and restructure,” said co-author Koty Sharp, associate professor at Roger Williams University. “Our research found evidence for a shuffling during that dormant period that may help us identify microbial associates that are key to coral health and recovery from disturbance.”

Why does coral wake up?

‘Junk DNA’ could be key to controlling fear

With this study, a marine species—the coral A. poculata—now joins bears, squirrels, crickets and others on the list of animals found to have microbiomes that shift while they are dormant. For example, the ground squirrel’s gut microbiome plays an important role in nitrogen recycling while the squirrel fasts during hibernation.

“This work opens a lot of questions,” Brown said. “A big one is: Why does the coral ‘wake up’ in the early spring? This study suggests that key microbial groups may play an important role in triggering the onset of or emergence from this coral’s dormancy and the regulation of its microbiome.”